(Hognose) The media love the idea that the firearms market is in a state of collapse. This propaganda theme is being fed to them by Bloomberg-funded gun-ban groups, and by Bloomberg’s own propaganda arm, Bloomberg News, and, like any good propaganda campaign, it reinforces the presuppositions, biases, and slants of the intended targets (in this case, Acela Corridor newsmen) with a Narrative® that’s Too Good To Check™.

One writer who didn’t check his Narrative®, or much of anything else, was David Francis at Foreign Policy, the magazine/website that’s expert in strategy because it employs Beltway drones with degrees from The Right Schools. (Most of whom can only function overseas where Loud Slow English is understood).

Colt guns may have won the West. But they aren’t sufficient for winning modern wars, and now the iconic American weapons-maker, which has been making arms since the 19th century, has filed for bankruptcy.

As we’ve pretty conclusively demonstrated here, Colt hasn’t got its fiscal thingie in the wringer because its guns are no good (we buy them with our own money, and recommend them), but because their management has hollowed the company out financially for years.

In 2013, the Pentagon decided Colt’s M4 rifles weren’t up to snuff and awarded a key $77 million contract to supply the Army with rifles to F.N. Herstal, a weapons-maker based in Belgium. 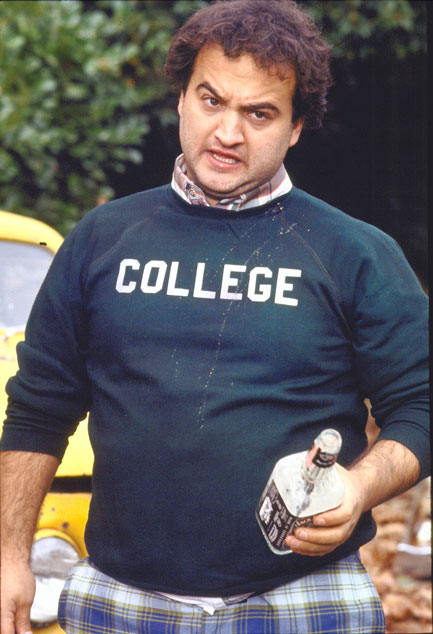 What? Where did he get that nonsense? In the real world the rest of us live in, the Pentagon decided that FNH offered a better deal on the same guns made using the same technical data package. Even the brain-deads in the professional Beltway media got that mostly right at the time. Colt couldn’t meet FNH’s price, which is not surprising as they have UAW labor (high cost/low productivity) and a high-energy-consumption (spelled “cold”) and very high-tax location. (Where the governor just added $2 Billion in increased state taxes). Nobody decided Colt’s guns were “not up to snuff.” They will serve alongside the FN rifles for decades, absent a revolution in firearms design.

And, oh yeah, Colt has to charge enough to pay down $350 Million or so in debt, much of which capital was pocketed rather than reinvested. So, shocker: their bid wasn’t the best. (The real shocker is that it was even competitive, with all those burdens on the company). But Francis isn’t done getting it wrong:

There is so much fail in that sentence that one’s hair hurts, even if one is bald. Let’s enumerate a few things that Francis could have got right if he had the integrity and ambition to deploy Google:

The loss of the DoD business, combined with the decreasing demand for guns after the wars in Iraq and Afghanistan, raise serious questions about whether Colt can raise the $350 million it needs to pay off its debt.

Lord love a duck. How innumerate is this guy? Exercise for the reader: with the average pistol, rifle or carbine on a .gov contract selling for around $1k, assuming gross margins of a generous 25%, how many guns does Colt have to sell to pay down the debt? Assume for the sake of simplicity that the interest on the debt is not compounding (which it is, at 8-10%).

Meanwhile, through the magic of compound interest, the debt is going in the wrong direction — escalating.

So why else is Colt in the hole, if we’re going to ignore the hedgelephant in the room?

For their part, law enforcement officers are increasingly turning to Glock pistols as a sidearm, as opposed to Colt’s 1911 gun. This is because many believe the Glock to be a more reliable pistol; there is a long record of complaints about the Colt gun jamming.

The 1911 was always a tiny minority gun in police work. Police departments like the Glock for the same reason they liked their real previous gun, the double-action revolver: it’s really simple and the most inept Barney Fife can usually operate it with instruction. (Of course, without instruction, he shoots himself, or another officer). Very few cops have the gun savvy to want to carry a 1911.

As far as Colt’s dependence on government contracts for the 1911, except for the niche M45 for the Marines, the last contract Colt got was up seventy years ago.

If this is the end of the road for Colt…

…David Francis is not the guy to tell you.

One last screwup of his, then we’ll move on to another Ambassador from Bloombergia.

Even the Rangers have abandoned the gun for Sig Sauer pistols.

What? Ah, he means the Texas Rangers. Being as he’s a defense expert with Foreign Policy, he’s probably never heard of any other kind.

Francis’s ignorance of what he’s reporting on isn’t exactly rare, but his laziness and lack of simple reporterly integrity does. This kid’ll go far.

Within the Beltway, that is, not literally far. That’s not what Foreign Policy is about!

via Why Cops and Soldiers Fell Out of Love with Colt Guns | Foreign Policy.

The next example of spin is from Bloomberg hireling Paul Barrett, and Barrett starts strong with a dead-on descriptor of why Colt is in this pickle in the first place:

[T]he main reason the company hasn’t weathered rocky market conditions since the winding down of the wars in Iraq and Afghanistan is that the New York financiers who control the company borrowed too much and paid themselves lavishly.

As I reported in a feature story last year, the private equity firm Sciens Capital and its affiliates loaded Colt with debt since the mid-2000s while taking cash out in the form of “distributions” and “advisory fees.” Sciens remains the controlling owner of Colt Defense, according to a regulatory filing. An executive with Sciens did not immediately return a message seeking comment.

Barrett did not note that the suddenly renegotiated lease for the plant, which is owned and leased to Colt by Sciens insiders, is one more example of the Sciens hedgies “taking cash out,” which they’ll continue doing until the parasitic load kills the host. (If you thought that this bankrupcty was the end of the ride for Sciens and its vampire management style, so did we, and so, probably, did Barrett. But we were all wrong, at least for the time being).

It will be interesting to see if a creditor or group of creditors tries to intervene and get Sciens booted out of the drivers’ seat.

So, mostly Paul Barrett’s reporting is the incisive financial analysis that he was the first to apply to Colt, several years ago. But then, having stated the problem and the cause, he goes astray:

In 2009 and 2010, meanwhile, Colt somehow missed out on the “Obama surge,” a run of strong civilian gun sales prompted by fears whipped up by the National Rifle Association that the Democratic president would stiffen federal gun control.

Yeah, it was all artificial fears whipped up by the NRA. Fast and Furious, Choke Point, ATF 5.45 and M855 bans, executive orders overturning black-letter law — none of that really existed, it’s all just a figment of the NRA’s feverish imagination, and they have no better friend than Barack Obama. (Unless it’s Eric Holder). This is a common Bloomberg propaganda theme, and the media are full of it (in both senses of the expression). For example, to whip the whipping boy we started with, Foreign Policy, here’s former made-guy on the Democrat policy-coordination Journolist, Dave Weigel, a few years ago:

Barack Obama won the presidency in 2008, but he was no Bill Clinton — let alone a Lula. Firearm and ammo sales spiked. Obama didn’t restore the Assault Weapons Ban. Rep. Gabrielle Giffords was shot in the head. But Obama made no moves whatsoever to restrict firearms.

Hey, who are you gonna believe, lyin’ Dave Weigel or your lyin’ eyes? But that was the Bloomberg line then. (“Obama is a supporter of  the 2nd Amendment, but….) Ah, but what’s the line now? The line is that sales are down. We already saw that in Barrett’s story above — there was a “spike” in 2009 and 2010, which Colt missed.

Using NSSF adjusted NICS data (members-only .pdf), both those years had about 9.5 million NICS checks executed; sales went up every year until 2013’s peak of 14.8M adjusted NICS checks; 2014’s NICS fell back to 13M, still the 3rd highest in history. (The rank is 2013, 2012, 2014). Taking the year-to-date adjusted NICS as of 31 May and multiplying by 12/5 suggests this year will fall between 2012 and 2014 if sales continued at the same rate, but this disregards the seasonality in the data: historically, April through August are the sales doldrums, and the peak months of the year, the fall hunting season and the Christmas gift-giving season, are ahead. Asthe FBI says (.pdf):

The NICS Section observes an increase in transaction activity associated with major hunting seasons and year-end holidays. Since the inception of the NICS, the day after Thanksgiving continues to be a day that the NICS processes a high volume of firearm background checks. In 2014, the day after Thanksgiving ranked as the second highest day ever, when the NICS Section’s staff processed 175,754 NICS background checks (see chart below) 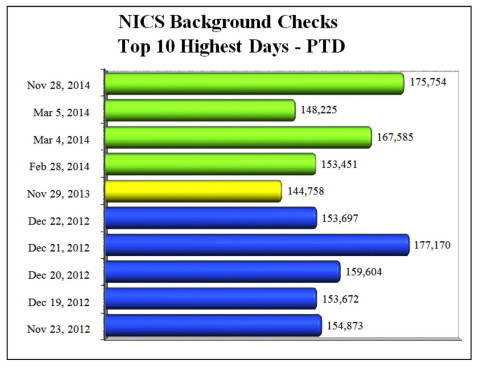 Gee, did you know that sales were continuing at record levels? Not if you read the mainstream media’s narrative team.

The panic-based buying that lifted the small arms industry has now eased, making it even more difficult for Colt to move the military-style semiautomatic rifles it had hoped would be its salvation. “The industry’s recent rapid growth is expected to slow over the next five years, increasing at a more modest average annual rate of 4.1 percent,” according to the research firm Ibisworld.

Yeah, the industry is dead… it’s expected to advance at 4.1% in the contracting economy that uncertainty and rule of men, not law, has produced.

Colt’s problem is not lack of customers. They may have some product problems (which comes of distributing the money that could have developed new products, if that were a priority for Sciens), but the basic problem they’ve got is that they’re so overleveraged that they’d need to sell more guns than they can reasonably build to get out from under the debt burden.

For months, for years, there has been no way Colt could reasonably pay its debts. It has been, for all that time, de facto if not de jure insolvent, although it could kick cans and pretend there was no foreclosure coming by borrowing on the line of credit to pay the vig on the interest-only loan. The reckoning can be delayed, but it can’t be stopped.

It has, however, been a master class in (1) techniques of delay and milking a captive company on the one hand, and (2) modern propaganda techniques as practiced by the media on the other. So there is that in it for all of us.

But if you take one set of facts away from this post, take this: