“… here is a very interesting story about Detroit and it’s pending bankruptcy.
The greedy guts want it all, and they don’t care who gets hurt or destroyed.” 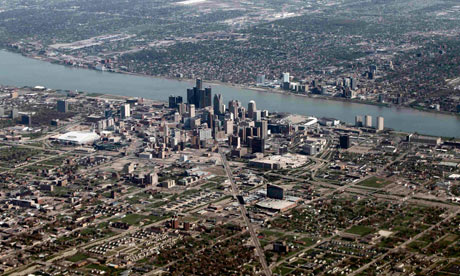 Detroit isn’t eligible for a makeover unless a judge finds that key steps have been met, especially good-faith talks with creditors earlier this year. Photo: Jason Reed/Reuters

Thousands of Detroit streetlights are dark. Many more residents have fled. Donors are replacing ambulances that limped around for 200,000 miles. Millions in debt payments have been skipped.

Is there really any doubt the city is broke?

A judge starts exploring that question Wednesday in an unusual trial to determine whether Detroit indeed is eligible to scrub its books in the largest public bankruptcy in US history. Unions and pension funds are claiming the city failed to negotiate in good faith before filing for chapter 9 protection in July.

A city isn’t eligible for a makeover unless a judge finds that key steps have been met, especially good-faith talks with creditors earlier this year. It’s a critical decision: If Detroit clears the hurdle, the case would quickly turn to how to solve at least $18bn in debt and get city government out of intensive care.

“It’s a crucial point in the case,” said lawyer Chuck Tatelbaum, a bankruptcy expert in Fort Lauderdale, Florida. “There will be others, but this is the go or no-go … If there was ever a poster child for what Congress decided when they enacted chapter 9, it’s for a city like this.”

Nonetheless, unions and pension funds are challenging Detroit on the eligibility question. They claim emergency manager Kevyn Orr, who acquired nearly unfettered control over city finances following his appointment by Michigan governor Rick Snyder, was not genuinely interested in negotiating when they met with his team in June and July. Orr insists pension funds are short $3.5bn and health coverage also needs to be overhauled.

Evidence will show that Orr “planned to file bankruptcy long before the purported negotiations had run their course, confirming that the ‘negotiations’ were no more than a check-the-box exercise on the way to the courthouse,” Babette Ceccotti, an attorney for the United Auto Workers, said in a court filing.

Earle Erman, attorney for Detroit’s public safety unions, said the city has cut wages and changed health care benefits without across-the-table talks. Another lawyer, Sharon Levine, representing AFSCME, said the city spent months “mapping out its path to chapter 9,” not looking for compromises that could keep Detroit out of bankruptcy.

In response, however, attorneys for the city said a 14 June meeting and subsequent sessions with creditors were well-intended but fruitless. A bankruptcy filing was being prepared, they acknowledged, but “never set in stone.”

Spiotto said Steven Rhodes will have much discretion to determine whether the city has met its “good-faith” burden.

“I don’t think courts require perfection,” he said. “Good faith is not measured solely by, ‘Did they offer what we want?’ It’s about providing opportunity.”

The trial in front of Rhodes is expected to last several days, with testimony from Orr, police chief James Craig, financial consultants and, possibly, the governor. It will be an autopsy on what Snyder has called decades of ruinous financial decisions in Detroit combined with an exodus of people — the population has dropped to 700,000 from 1.8 million — and other social and economic factors.

“The city’s restructuring must provide a foundation for the city to begin to provide basic, essential services to its residents in a reliable fashion,” Orr said in July when he took Detroit into bankruptcy. “Without this, the city’s death spiral … will continue.”

University of Michigan law professor John Pottow said unions and pensions funds are aggressively challenging the city because they lose leverage if the judge finds the chapter 9 filing was proper. Detroit would take the lead in coming up with a plan to bring the city out of bankruptcy, putting pensions at risk along with billions owed to other creditors.

“It makes denial and rationalization harder for people who want this to go away,” Pottow said.