In South Australia, when the lights went out, Olympic Dam took two entire weeks to get operational again. Spare a thought for those in Puerto Rico. Right now, five months later, and one in 6 still don’t have electricity. That’s five full months of blackout –  surviving off candles, car batteries, small diesels and whatever anyone can get. Some people will be waiting til May. Though that’s “95%” connected, so still no joy or lights, for one in 20 people. How do you put a roof back on your house when you can’t even power up your drill? (See The Atlantics photo montage from January 27th to get some idea of what life is like, months after the storm).

Puerto Rico has 3.6 million people, was poor and corrupt, with failing infrastructure and huge debts before Hurricane Maria hit on Sept 20th. The government has a budget of $10b per year, but owes more than $70b. The hurricane wiped out 80% of the infrastructure, completely trashing some of the solar and wind “farms”, and bringing down transmission lines.

The Federal Emergency Management Agency and the US Department of the Treasury informed the Puerto Rican government on January 9, 2018 that it will not receive a promised $4.9 billion loan for Hurricane Maria rebuilding efforts, after finding that the commonwealth had a cash balance of over $8.5 billion.

According to David Dayen of the Intercept, Puerto Rico had $1.7 billion for day-to-day operations as of December 29, 2017, along with $6.875 billion in other accounts. It will receive the loan from the Community Disaster Loans Program when this money decreases further. The commonwealth is the only US territory affected by disaster that is being means-tested, as well as the only territory that will receive a loan instead of a grant.

–Shocking Video Shows What Everyday Life Is Like In Puerto Rico Now:

Authored by Daisy Luther via The Organic Prepper blog,

In Puerto Rico, everything has changed since Hurricane Maria struck nearly 3 months ago.

Many people have no running water. And if they do, it can’t be consumed without boiling.

There’s no electricity in many regions.

I’ve written about the SHTF aftermath in Puerto Rico, both the day after the storm,  a week after, and a couple of months later. But while there is a lot of good information in all those articles, it’s just words on a page.

The video below brings it to life. This is what life looks like for people who have just watched everything be turned upside down by Mother Nature.

“The same corruption & failure of the Aid system happened in Haiti.

– What Life Is Like For A Million People In Puerto Rico Who Still Don’t Have Power:

Authored by Daisy Luther via The Organic Prepper blog,

If you ever wondered what it would look like if the grid collapsed here on the mainland, the island of Puerto Rico is a tragic, real-life case study. 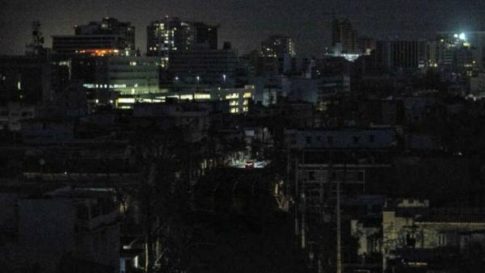 These stories show us what life is like for more than a million people who STILL don’t have power and running water nearly 3 months after Hurricanes Irma and Maria devastated their communities.

At first, it was a war zone.

In the first days after the grid went down, chaos ruled. I vetted as many of the stories as I could and concluded:

– “God Is All I Have” – One Month In, Puerto Ricans Fight For Survival Amid Sluggish Recovery

Nearly four weeks after Hurricane Maria devastated the island of Puerto Rico, doctors are experiencing “post-apocalyptic” conditions. The reality doctors in Puerto Rico are facing is similar to that from a dystopian novel.

Doctors are conducting surgical procedures in sweltering 95-degree heat, experience malfunctioning X-ray machines, and have seen medications literally melting. “We’re practicing disaster medicine in real life,” said Dr. William Kotler, a senior resident in emergency medicine at Florida Hospital in Orlando, who spent two weeks volunteering on the island earlier this month. “We improvise if we have to, with very little resources.”

In the days following Hurricane Maria’s devastating blow to Puerto Rico, air traffic on the island came to a complete standstill as airport damage prevented commercial pilots from servicing the island.  That said, with the island economy grinding to a halt, San Juan International apparently managed to find a way to accept one very important plane…a “jet loaded with an undisclosed amount of cash” from New York Fed president William Dudley.  Per Bloomberg:

Less than a week into the massive blackout that followed Hurricane Maria and essentially turned Puerto Rico into a cash-only economy, one top local banker became so concerned about the supply of bills that he called the Federal Reserve.

William Dudley, the New York Fed president, put the word out within minutes, and ultimately a jet loaded with an undisclosed amount of cash landed on the stricken island, according to Richard Carrion, the Popular Inc. executive chairman who made the call. He and Chief Executive Officer Ignacio Alvarez reflected on the chaotic early days of the crisis in an interview Friday at their office in San Juan’s Hato Rey financial district.

“We thought the cash was going to be a problem,” said Carrion, 64, whose bank is the biggest in Puerto Rico by deposits. “The magnitude of this is something we haven’t experienced.” Suzanne Elio, a New York Fed spokeswoman, declined to comment on the money shipment.

The executives described corporate clients’ urgent requests for hundreds of thousands in cash to meet payrolls, and the challenge of finding enough armored cars to satisfy endless demand at ATMs. Such were the days after Maria devastated the U.S. territory last month, killing 39 people, crushing buildings and wiping out the island’s energy grid. As early as the day after the storm, the Fed began working to get money onto the island, according to a person with knowledge of the matter, who asked not to be named discussing the Fed’s preparations.

Of course, as we’ve noted before, nearly three weeks after Hurricane Maria made landfall in Puerto Rico on September 20th, some 90% of the island is still without power and the resulting damage to the local economy will undoubtedly have long-lasting effects.

Nine of ten Puerto Ricans are still without power, half the island has no drinking water, schools are closed, there’s a government-mandated curfew — and businesses everywhere are trying to cope. At Popular, half of branches remained shuttered Friday, as did two-thirds of ATMs.

Alvarez, 58, is a Harvard Law School graduate who took over as Popular’s CEO earlier this year. Previously, the post was held by Carrion, whose family has helped run the firm for generations. Alvarez said that stores have closed and workers have been laid off as a result of the storm, which is a worry for the bank.

“More than property damage to our collateral, which is not going to be that great, is the economic disruption caused by the hurricane,” he said.

The lack of power was a nightmare for dialysis and cancer patients, as well as the elderly trapped in condominiums without air conditioning. The blackout also means that this corner of credit-card dependent America is relearning how to function almost entirely in cash. When some generator-powered ATMs finally opened, lines stretched hours long, with people camping out in beach chairs and holding umbrellas against the sun.

Popular could face a downgrade by Fitch Ratings on concerns that the storm’s after-effects may harm business. Its stock has dropped 11 percent since the storm in New York trading, and is down 19 percent for the year.

Meanwhile, the even larger threat to the Puerto Rican economy is that residents will simply decide they’ve had enough of the island life, and the constant threat of devastating hurricanes that comes along with it, and jump ship to the mainland.  As Bloomberg notes, the island already loses roughly 2% of its population a year to the continental United States but, with many people being evacuated in the days following September 20th, it’s very likely that 2017 will see a much larger exodus.

A major concern, both men agreed, was the prospect of a mass exodus to the U.S. mainland. Governor Ricardo Rossello has warned that, if the aid package being debated in Washington falls short, “millions” could leave the island. The population has already been shrinking 2 percent annually for three years running on the island of 3.4 million, due in large part to a decade-long economic lull.

“Everybody has relatives in the states,” said Alvarez, cutting him off.

“Yeah, everybody,” Carrion said. “There’s more Puerto Ricans in the continental U.S. than here. So everybody’s got a relative.”

– “It Will Be A Disaster”: Puerto Rico To Run Out Of Cash On October 31

As mayors of cities with large Puerto Rican populations continue to advocate for federal assistance to help with the resettlement of hundreds of thousands of Puerto Ricans who are expected to temporarily seek shelter with friends and families in the US, Florida Gov. Rick Scott has declared a state of emergency in Florida, allowing state agencies to take extraordinary measures to assist families that will soon be arriving in droves to cities like Orlando and Miami, both of which feature large Puerto Rican populations.

The Orlando Sentinel reports that Scott announced that disaster relief centers will be set up at Orlando International Airport and in Miami to help those seeking refuge in Florida.

– US Cities Demand Federal Help As They Brace For Influx Of 100,000s Of Puerto Ricans:

As the disaster-relief effort enters its second week, air traffic is slowly resuming, which means hundreds of thousands of Puerto Ricans will likely flee the devastated island to stay with friends and relatives in the continental US as they wait for FEMA to rebuild roads, repair power grids and and revive the island’s communications infrastructure – a process that could take months, if not longer.