As expected, Puerto Rico will default on about $2 billion in debt payments Friday, including $780 million in constitutionally-backed general obligation bonds, as governor Alejandro Garcia Padilla has issued an executive order authorizing the suspension of payments. In addition, Garcia Padilla also declared states of emergency at the island’s biggest public pension – the Commonwealth’s Employee Retirement System – which is more than 99% underfunded, as well as the University of Puerto Rico and other agencies Reuters reports. The default will mark the first time a US territory has failed to pay on its general obligation bonds.

“Under these circumstances, these executive orders protect the limited resources available to the agencies listed in these orders and prevents that these can be seized by creditors, leaving Puerto Ricans without basic services,” Garcia Padilla’s administration said in a statement.

The suspension of payments comes just as the Senate rushed a bill to President Obama that was signed on Thursday, and the bill will now allow Puerto Rico to access a bankruptcy-like debt restructuring process for its roughly $70 billion in debt. As Bloomberg explains, the next phase will now be for the US appointed control board to begin the restructuring negotiation process. The step allows Garcia Padilla to use cash that would otherwise go to investors to avert cuts to schools, policing and health care that Garcia Padilla said would extract a heavy toll on the island where nearly half of the 3.5 million residents live in poverty.

While creditors will now be left to battle it out in the courts, the default will leave large insurers of Puerto Rico’s bonds on the hook for payments. As CNBC reports, Assured Guaranty, Ambac and National, a wholly owned subsidiary of MBIA, collectively have more than $800 million in exposure to the total payments due Friday. Assured Guaranty and MBIA back $196.5 million and $173 million in GO bonds respectively. Ambac’s largest exposure are $41.7 million in rum tax bonds and $38.6 million on the Public Building Authority GO-guaranteed securities.

As Bloomberg notes, the prospect of an orderly resolution has seen the S&P Puerto Rico bond index rise for the past 23 days, the longest winning streak since 2012. GOs with an 8% coupon and maturing 2035 traded Thursday at an average 66.8 cents on the dollar according to Bloomberg. 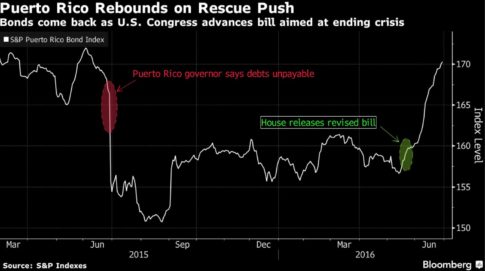 Bloomberg provides a breakdown of what is due Friday July 1:

General-obligations: About $816 million of principal and interest. Puerto Rico’s constitution stipulates that the government must repay general obligations before other expenses. Garcia Padilla said on Wednesday that the island won’t pay general obligations because there isn’t enough money to cover essential services and pay investors. The commonwealth has $13 billion of general obligations and a default on the securities would be the first payment failure from a state-level borrower on its direct debt since Arkansas in 1933.

Puerto Rico Electric Power Authority: $420 million of principal and interest. The island’s main electricity provider, called Prepa, will avoid defaulting Friday after it reached an agreement with its creditors. Bondholders and insurers will buy bonds from Prepa in a similar arrangement to how the utility averted defaulting on Jan. 1.

Puerto Rico Highways & Transportation Authority: $220 million of principal and interest. The highway agency repays its debt with gas-tax receipts and toll revenue. The authority is expected to pay investors on July 1 from reserve funds already held by the bond trustee, according to S&P Global Ratings. Future payment are uncertain because Puerto Rico has redirected a portion of the agency’s revenue to the general fund. HTA has $6.4 billion of bonds and notes outstanding.

Puerto Rico Public Buildings Authority: $207 million of principal and interest. The bonds are repaid with rents that public agencies pay for their office buildings and are guaranteed by the commonwealth. The authority has about $4 billion of bonds outstanding.

Puerto Rico Aqueduct and Sewer Authority: $135 million of principal and interest. Island lawmakers are working on legislation intended to allow the water agency to raise money by issuing debt through a newly created entity. If it can’t, the authority has said it may redirect funds used to pay debt to cover overdue bills to contractors and suppliers. It has $4 billion of bonds outstanding.

Puerto Rico Infrastructure Financing Authority: $78 million of principal and interest. Called Prifa, the agency has sold the island’s rum-tax bonds. Bond anticipation notes maturing July 1 are expected to default after Puerto Rico said it would instead use the revenue that normally repays Prifa debt to cover essential services instead. Prifa also defaulted on a Jan. 1 interest payment. It has $1.9 billion of bonds outstanding.

Puerto Rico Convention Center District Authority: $20.8 million of principal and interest. The authority has reserve funds with its bond trustee to make the July 1 payment, but those funds could dry up for the next payment due Jan. 1 because Puerto Rico is redirecting its revenue, according to S&P. The agency uses hotel-room tax receipts to repay debt. It has $397.7 million of bonds outstanding.

Puerto Rico Pension-Obligation Bonds: $13.9 million of interest. The taxable debt was sold to bolster the island’s nearly depleted pension fund. The bonds are repaid from contributions that the commonwealth and municipalities make to the retirement system. It has $2.9 billion of bonds outstanding.

Government Development Bank for Puerto Rico: $9.1 million of interest. The bank has restricted withdrawals unless they are used for essential services. The bank defaulted May 1 on nearly $400 million that was due. It has $5.1 billion of debt outstanding.

Puerto Rico Public Finance Corp.: $4 million of principal. Since August the agency has failed to pay investors and was the first Puerto Rico agency to default after the legislature failed to appropriate needed funds. It has $1.1 billion of debt outstanding.

“I want to let the people of Puerto Rico know that although there are still some tough work that we’re going to have to do to dig Puerto Rico out of the hole that it’s in, this indicates how committed my administration is to making sure that they get the help they need.” Obama told reports before signing the Puerto Rico Oversight, Management and Economic Stability Act (PROMESA). As for Puerto Rico, the only lesson that the commonwealth has learned is that if it gets too leveraged, it can just discharge the debts through a quasi-bailout and all will be well