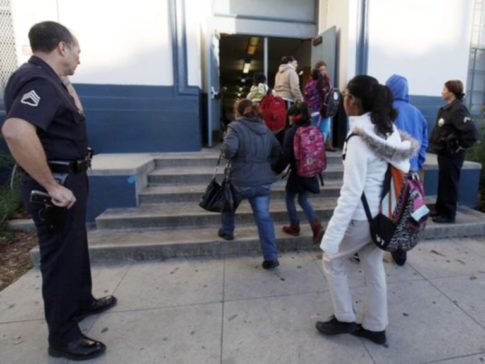 Before this week, 14-year-old Ella Fishbough had never been in trouble at school.

The cheerful, curly-haired eighth-grader’s undoing came when she learned that a male friend was having a bad day. As consolation, Ella put her arms around him in a hug.

“It was literally for a second,” the eighth-grader told Click Orlando. But that moment earned her a morning in detention — as well as a blemish on her formerly spotless disciplinary record.

It is at each principal’s discretion to determine what kind of touching is inappropriate. According to WFTV Orlando, hugging was banned altogether at Jackson Heights this year, in addition to holding hands, linking arms and kissing.

So this really happened. Via Philly.com:

On June 16, police were called to an unlikely scene: an end-of-the-year class party at the William P. Tatem Elementary School in Collingswood.

A third grader had made a comment about the brownies being served to the class. After another student exclaimed that the remark was “racist,” the school called the Collingswood Police Department, according to the mother of the boy who made the comment.

The boy’s father was contacted by Collingswood police later in the day. Police said the incident had been referred to the New Jersey Division of Child Protection and Permanency. The student stayed home for his last day of third grade.

Dos Santos said that her son was “traumatized,” and that she hopes to send him to a different Collingswood public school in the fall.

“I’m not comfortable with the administration [at Tatem]. I don’t trust them and neither does my child,” she said. “He was intimidated, obviously. There was a police officer with a gun in the holster talking to my son, saying, ‘Tell me what you said.’ He didn’t have anybody on his side.”

The incident, which has sparked outrage among some parents, was one of several in the last month when Collingswood police have been called to look into school incidents that parents think hardly merit criminal investigation.

Superintendent Scott Oswald estimated that on some occasions over the last month, officers may have been called to as many as five incidents per day in the district of 1,875 students.

This has created concern among parents in the 14,000-resident borough, who have phoned their elected officials, met with Mayor James Maley, blasted social-media message boards, and even launched a petition calling on the Camden County Prosecutor’s Office to “stop mandated criminal investigation of elementary school students.”

The increased police involvement follows a May 25 meeting among the Collingswood Police Department, school officials, and representatives from the Camden County Prosecutor’s Office, where school officials and police both said they were told to report to police any incidents that could be considered criminal, including what Police Chief Kevin Carey called anything “as minor as a simple name-calling incident that the school would typically handle internally.”

The police and schools were also advised that they should report “just about every incident” to the New Jersey Division of Child Protection and Permanency, Carey said.

Previously, the school district, following the state’s Memorandum of Agreement Between Education and Law Enforcement Officials, had only reported incidents it deemed serious, like those involving weapons, drugs, or sexual misconduct. Both Carey and School Board President David Routzahn described the protocol set forth after that May meeting as a significant change in procedure.

Several parents said they consider the recent police involvement not only ridiculous but harmful.

Megan Irwin, who has two daughters who have attended Collingswood public schools and who teaches first grade in Pennsauken, said the police had been called to deal with behavior the schools could easily have handled.

“Some of it is just typical little-kid behavior,” Irwin said. “Never in my years of teaching have I ever felt uncomfortable handling a situation or felt like I didn’t know how to handle a situation.”

As an elementary school teacher, isn’t dealing with these sort of incidents a key part of the job? Why are school administrators taking such tasks away from where they belong, with the teachers?

And Pam Gessert, a Collingswood resident who works as a school counselor in Burlington County, said that because teachers have the best relationships with students, they are most qualified to determine what happened in a particular incident.

Let’s discuss how ridiculous this is from a couple of angles. First off, we don’t even know what the kid said, and if it was in fact racially offensive. According to the article, “another student exclaimed that the remark was racist,” so what was actually said? Did the teacher actually hear the comment? It’s possible one kid merely decided to call it racist knowing the other kid would get in trouble. I’m not saying this is what happened, but it’s happened before.

For example, recall the case of Ethan Chaplin as highlighted in the 2014 post, New Jersey Threatens to Take 13-Year-Old Student From His Father Due to “Non-Conforming Behavior”:

This is the story of Ethan Chaplin, who back in April was twirling a pencil in his seventh grade classroom in Vernon, NJ. One of the class bullies saw an opportunity to be a jerk and yelled: “He’s making gun motions, send him to juvie.”

Rather than demonstrating any sort of common sense, the teacher apparently had a panic attack and reported him, which resulted in a two-day suspension.

Amazingly, the saga manages to get even worse. Just today, we find out that New Jersey is threatening to take Ethan away from his father. Incredibly, the state is claiming that the prior psychological evaluation wasn’t sufficient and more testing needs to be done. Since his father Michael is pushing back, the loss of custodianship has been threatened. Absolutely insane.

It’s interesting that both these incidents occurred in New Jersey, but I digress. The sort of thing that happened to Ethan Chaplin is bound to happen when kids recognize that adults will have a panic attack if anyone purportedly says something racist or twirls a pencil in a threatening manner. That’s what little kids do from time to time, but let’s move on.

Let’s assume this nine year old did indeed make a racially charged comment about a brownie. Why in the world should the police ever be involved in something like this. Teachers are now so scared about losing their jobs if they don’t call 911 for every little incident, they are forced to treat toddlers like prison inmates.

It’s absolutely mind-boggling that this could actually happen. Did the school administrators not think about the kind of long-term psychological damage this sort of thing might do to the children? The only lesson these kids learned is that for everyday mischief little kids have engaged in since the beginning of time, a person with a gun, badge and ability to lock you away in a cell is just a phone call away. All because a nine year old made a comment about a brownie.

Any society that puts up with this crap for long is doomed to irrelevance.

11-Year-Old Boy Taken Away by CPS for Being Left in Backyard Alone for 90 Minutes; Parents Charged with Neglect