– “Don’t Forget, I’m The King Of Debt, I Love Debt” – Trump Chimes In On Puerto Rico

In an interview with Wolf Blitzer, Donald Trump said that although he is the “king of debt”, and that he “loves debt”, he wouldn’t bail out Puerto Rico. 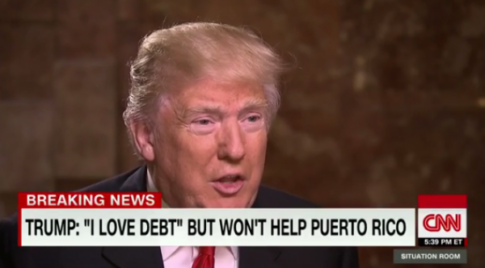 As far as how he would suggest Puerto Rico solve its debt issue, The Donald, of course, has a solution for that.

“As a very successful person, I would buy companies, throw them into a chapter, bankrupt it, negotiate, I would do great deals. I didn’t use them for myself, I used them as a business person like others do. I know more about debt than practically anybody, I love debt. I also love reducing debt, and I know how to do it better than anybody. Puerto Rico has too much debt, so you can’t just restructure it. You have to use the laws, you have to cut the debt way down, and get back to business.”