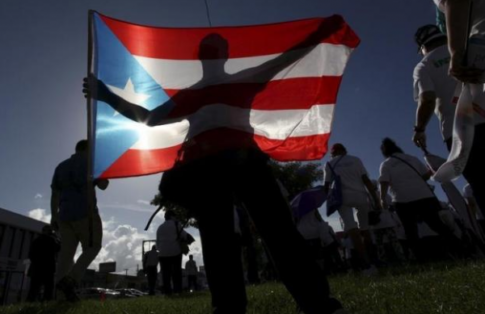 – Republicans, Democrats Agree On A Bill To Bailout Puerto Rico:

It turns out that Puerto Rico’s plan to default on its debt and beg congress for help is working out as planned.

After a slight delay, House Republicans have reached an agreement with the Obama administration to provide a path to restructure Puerto Rico’s $70 billion debt load. The bill would offer the island a legal out similar to bankruptcy and wouldn’t commit any federal money according to the WSJ.

All of the political talking heads are supportive of the bill, with House Speaker Paul Ryan saying that “the stability of the territory is in danger. Today, Republicans and Democrats came together to fulfill Congress’s constitutional and fiscal responsibility to address the crisis”, and Treasury Secretary Jacob Lew called the proposal “a fair, but tough bipartisan compromise.”

While the goal of the bill is to reduce Puerto Rico’s debt burden, which currently absorbs about a third of the island’s revenues, the bondholders are vehemently opposing it, knowing that a haircut would be all but guaranteed. In addition to Puerto Rico’s $70 billion in debt, it also has $40 billion in unfunded pension liabilities, and bondholders have been arguing that any legislation should require pensions to be reduced before any bonds get restructured.

As a reminder, Puerto Rico’s economic crisis has led to a 10% drop in population over the past decade, which has resulted in an eroding tax base, and exacerbated further with businesses having to shut down.

In order to avoid default last year, the government withheld tax refunds and payments to suppliers. “There is an extremely high level of uncertainty, which makes it impossible to attract new investment” said Jose Vazquez, an owner of multiple Subway restaurants on the island.

Jack Lew chimed in with some more value added commentary, telling bondholders that “the reality is if the economy of Puerto Rico doesn’t come back, the bondholders are not going to do well.”

As we have repeated, the entire tone of the process is reminiscent of the 2008 financial crisis when Hank Paulson threatened Armageddon if nothing was done to bail the banks out. This time, Treasury Secretary Jack Lew was sending out letters out warning that if no restructuring framework were to be set forth, a series of “cascading defaults” would be touched off. So, once again a path forward has been created that will simply wipe the slate clean for the US territory, and just as in 2008, a message has been sent that it’s ok to take on unsustainable debt loads, as they can now simply be discharged either through bankruptcy or a congressional tweak to existing laws.