– Puerto Rico Says Will Default Tomorrow, Begs Congress For Help “Or Else Crisis Will Get Worse”:

And of course, demands a bailout…

As we detailed earlier, It’s D-Day in Puerto Rico.As Bloomberg reports, investors are finding little comfort in the Puerto Rico Government Development Bank’s efforts to strike a last-ditch agreement with creditors to soften the blow of a default this weekend. The bonds that mature today (May 1st) have crashed to just 20c (disastrously below the 36-cent recovery rate the commonwealth proposed in March). 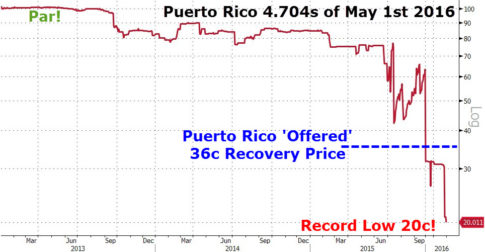 A default on the $422 million due today is “virtually certain,” S&P Global Ratings said April 11.

No matter which route Puerto Rico takes, credit-rating companies see a default as inevitable. Moody’s Investors Service analysts said last week that any non-payment, even if it’s agreed to by creditors, constitutes a default in their eyes. S&P Global Ratings said a distressed-debt exchange or temporarily withholding interest is synonymous to default.

But as Bloomberg reports, Puerto Rico said its Government Development Bank, which is operating in a state of emergency to preserve its dwindling cash, reached an agreement with some credit unions to delay $33 million of bond payments as the commonwealth rushes toward a potential historic default.

The pact only affects a portion of the $422 million that the bank owes on May 1. The GDB will exchange the $33 million in bonds for new debt that will mature May 1, 2017, Governor Alejandro Garcia Padilla’s administration said in a statement Friday. The terms of the agreement are available to other credit unions, called cooperativas, and investors, according to the statement.

“Apart from this private exchange, GDB continues to negotiate a potential transaction related to an exchange of all of GDB’s bond indebtedness, which would require the participation of all creditors of GDB (including the cooperativas),” the administration said in the statement. “The private exchange does not affect, or take the place of, those ongoing negotiations.”

The bank is still negotiating a possible debt exchange on all of its bonds, which would require the participation of all its creditors, according a the statement. The GDB, which structured the island’s debt sales, has $5.1 billion of debt. The governor’s office said Garcia Padilla will speak to the commonwealth in a televised address Sunday at 5 p.m. New York time.

1 thought on “Puerto Rico Says Will Default Tomorrow, Begs Congress For Help “Or Else Crisis Will Get Worse””