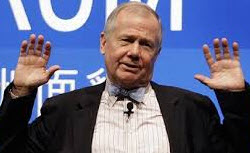 – Legendary Investor Jim Rogers Warns That The Worst Stock Market Crash In Your Lifetime Is Coming ‘This Year Or Next’:

If Jim Rogers is right, the worst stock market crash that any of us has ever seen is right around the corner.  For the past 15 years, Rogers has been a frequent guest analyst on CNBC, Fox News and elsewhere, and he is immensely respected for the depth of knowledge and experience that he brings to the table.  So the fact that he is warning that we are about to see the worst stock market crash in any of our lifetimes is making a lot of waves in the financial community.  And of course Rogers is far from alone.  Previously, I have written about several other prominent experts that are warning that a new financial crisis is imminent, and I have also discussed how a number of big investors are quietly positioning themselves to make an enormous amount of money when the markets crash.  Could it be possible that all of these incredibly sharp minds could be wrong?  Yes, but I wouldn’t bet on it.

– Jim Rogers Warns Next Crisis Will Be “Biggest In My Lifetime”

“We know this, but they’ll never kill barter, and then enterpreneurs will act as cash converters. Same old same old.”

– Jim Rogers: “We’re About To Have The Worst Economic Problems Of A Lifetime, A Lot Of People Will Disappear”:

“Get prepared,” warns billionaire commodity guru Jim Rogers, “because we’re going to have the worst economic problems in your lifetime and a lot of people are going to disappear.” In this wide-ranging interview with MacroVoices’ Erik Townsend, the investing legend discusses everything from whether Russia is being scapegoated (“yes, ask Victoria Nuland”), the war against cash (“governments love it… they want to control everything”), to his views on gold and the demise of freedom.

Are Russians the bad guys?

Well I do know that during the last administration, Mr. Obama’s administration as you probably remember we started, we tried to pull of an illegal coup in Ukraine, we got caught at it, what’s her name, Victoria Nuland, whatever the woman’ name the State Department they have there several pieces of evidence where we know she tried to instigate an illegal coup then of course the Russians outsmarted us and so the State Department started blaming it on the Russians and the hype against the Russians has gotten bigger and bigger ever since after we started– or tried to start, tried to instigate the illegal coup Crimea and Ukraine.

Read moreJim Rogers: “We’re About To Have The Worst Economic Problems Of A Lifetime, A Lot Of People Will Disappear”

The main reason the US government wants $14 billion in penalties from the German bank is that it is deep in debt. They’ve got a gigantic deficit – they are desperate for money. They’ll try to get it anywhere they can, Jim Rogers, financial commentator and investor, told RT.

Germany’s Deutsche Bank reportedly failed to reach an agreement with the US on settling a massive fine. The bank is facing a $14 billion fine penalty from the US Justice Department for mis-selling mortgage securities in the run-up to the 2008 financial crisis.

RT: Firstly just to make it clear why has the US imposed such an enormous penalty?

Jim Rogers: The main reason is that the US government is deep in debt. They’ve got a gigantic deficit – they are desperate for money. They’ll try to get it anywhere they can. I can’t imagine that Deutsche Bank should be liable for $14 billion, but I’m not involved.

When it comes to being direct and offering up some truth, one can rest assured that Jim Rogers is a prime candidate to do both.

In an interview with Yahoo! Finance, the legendary investor had some candid and quite unnerving things to say about the global market in the aftermath of Brexit.

“This is going to be worse than any bear market that you’ve seen in your lifetime. 2008 was pretty bad because of debt, well the debt all over the world is much, much higher now. Stocks in the US for instance have been going sideways for 18 months, 24 months. That’s called distribution by many people, so when you have distribution for a year and a half, it usually leads to bad things.”

If that was too upbeat, Rogers unveils his bear scenario:

– Jim Rogers Warns “Governments Plan Is To Destroy The People Who Save”:

“Everybody should be worried.. and be prepared,” warns legendary investor Jim Rogers, as he sees the market “facing a bigger collapse than in 2008,” and the central banks will be unable to kick the can much longer. “This is the first time in recorded history where you have Central Banks & governments setting out to destroy the people who save & invest,” Rogers exclaims and “the markets are telling us that something is wrong – we’re getting close.”

“The central bankers haven’t given up yet… they think they are smarter than you and me and the market… they’re not!”

Full interview with FutureMoneyTrends below…

“[Central Banks] think they are smarter than the market,” exclaims billionaire investor Jim Rogers, “they are not!”

Warning CNN in this brief but disturbing reality check that “we are all going to get hurt by a global recession,” Rogers takes aim at the incompetence of the “academic and bureaucrats who don’t know what they are doing,” raging that “this is going to be a disaster in the end.”