As long as corporations continue borrowing money to buy back their own stocks and the yen keeps dropping, the SPX will continue lofting higher.

The Japanese Yen’s real effective exchange rate (REER) has collapsed to the weakest since 1982, according to Mitsubishi UFJ Morgan Stanley Securities. Simply put, REER is a trade-weighted measure of Yen strength (or weakness) against, in this case, 59 trading partners; and as the nation posts an unprecedented 27th straight month of trade deficits [43rd straight month of Seasonally-adjusted trade deficits], Bloomberg reports MUFJ indicates “a structural shift” has taken place. 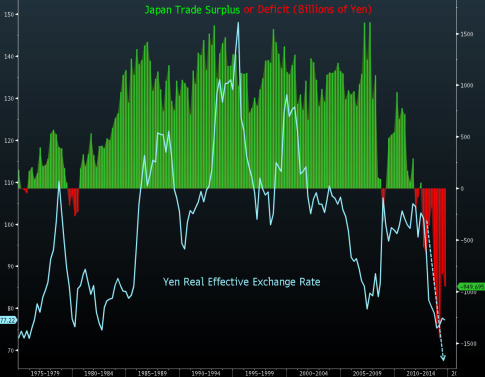 As a reminder, the Real Effective Exchange Rate (REER) is:

UPDATE: USDJPY has re-tumbled back below 101.00, recoupling with S&P 500 futures from the tried-and-failed attempt to ramp stocks overnight. It seems the short-JPY-driven carry traders have backed away from risk for now, no matter how much the BoJ primes the pump. 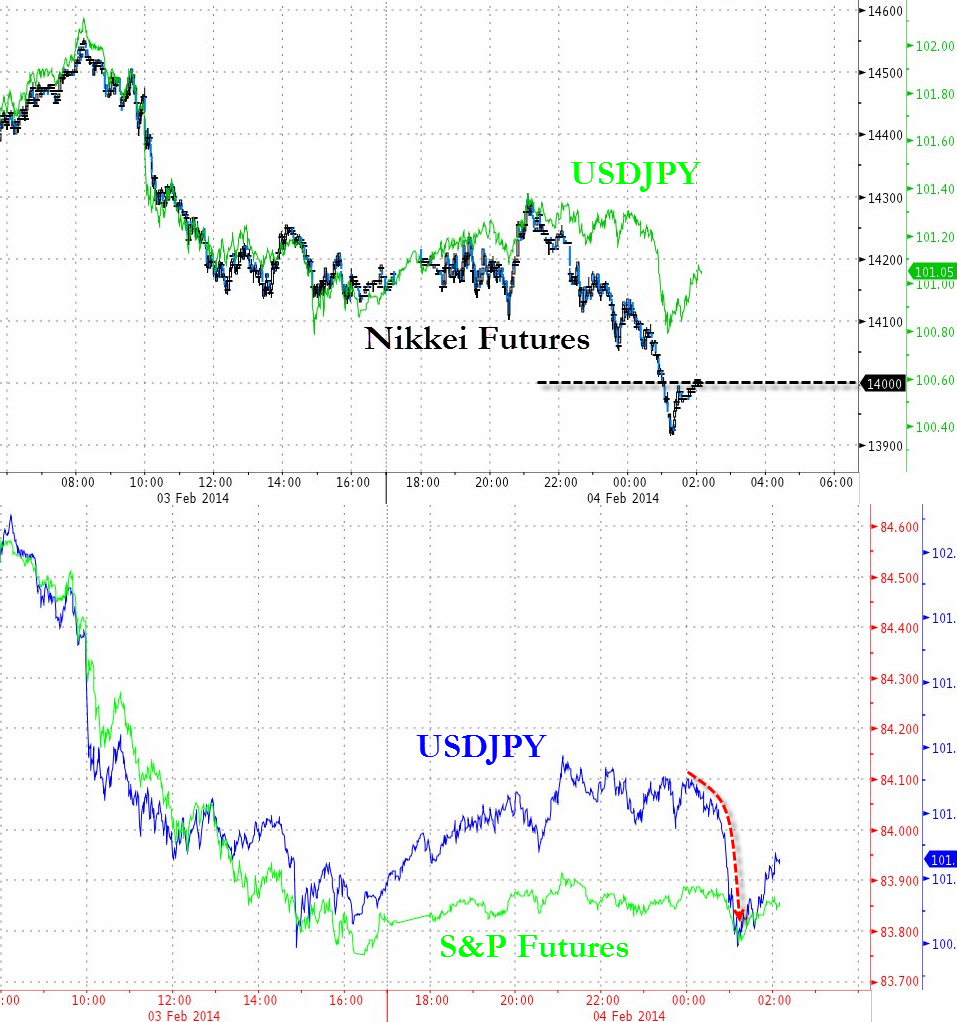 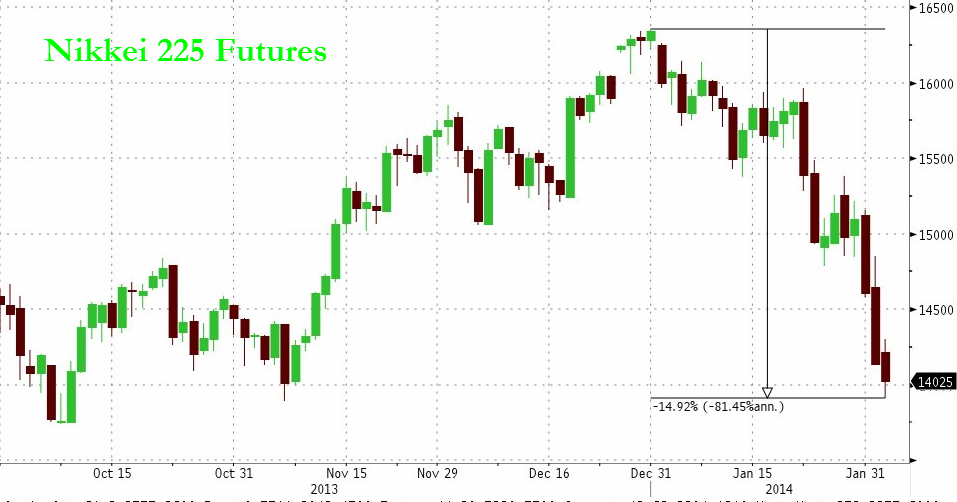 Despite the hope-driven exuberance exhibited immediately post the Abe/Kuroda show, the USDJPY-pumping stock-momentum fest has ended – abruptly. Japan’s Nikkei 225 has lost all its gains and is now trading below US day-session lows (3-month lows) but it is the broader TOPIX index (more akin to the S&P 500) that is collapsing. Down almost 5% on the day (its biggest drop since the May collapse), the TOPIX is at 4-month lows. The TOPIX Real Estate index just hit a bear-market – down 20% from Dec 31st highs. Japanese sell-side shops are in full panic desparation mode as “suggestions” that a sub-14,000 Nikkei will prompt an acceleration of Japan’s QQE money-printing idiocy. This is getting ugly fast.

– Kyle Bass Warns When “Everyone Is ‘Beggaring Thy Neighbor’… There Will Be Consequences” (ZeroHedge, Dec 5, 2013)

As the fast-money flabber-mouths stare admiringly at the rise in nominal prices of Japanese (and the rest of the world ex-China) stock prices amid soaring sales of wheelbarrows following Kuroda’s ‘shock-and-awe’ last night, it is Kyle Bass who brings these surrealists back to earth with some cold-hard-facting. Out of the gate Bass explains the massive significance of what the Japanese are embarking on, “they are essentially doubling the monetary base by the end of 2104.”

It is a “Giant Experiment,” he warns, but when you are backed into a corner and your debts are north of 20 times your government tax revenue, “you’re already insolvent.” Simply put, Bass says they have to do something and they have to something big because they are “about to implode under the weight of their debt.” For a sense of the scale of the BoJ’s ‘experimentation’, Bass sums it up perfectly (and concerningly), “the BoJ is monetizing at a rate around 75% of the Fed on an economy that is one-third the size of the US!”

What they are trying to do is devalue the currency to attempt to become more competitive while holding their rates market flat – the economic zealots running the world’s central banks believe they can live in that Nirvana – and Bass believes that is not the case, as they will lose control of rates, since leaving the zone of insolvency is impossible now. His advice, “if you’re Japanese, spend! or take it out of your country. If you’re not, borrow in JPY and invest in productive assets.” Do not be long JPY or Japanese assets as he concludes with the reality of Japan’s “hollowed out” manufacturing industry and why USDJPY is less important that KRWJPY.

For the first time in recorded history, we have nearly every central bank printing money and trying to debase their currency. This has never happened before. How it’s going to work out, I don’t know. It just depends on which one goes down the most and first, and they take turns. When one says a currency is going down, the question is against what? because they are all trying to debase themselves. It’s a peculiar time in world history.

Much has been made of newly appointed uber-easer Abe’s plans to weaken the JPY by any means possible. Since the global financial crisis began in early 2008, USDJPY has tracked remarkably closely with the ratio of Federal Reserve assets to Bank of Japan assets – as the currency wars escalated. Assuming the Fed proceeds with its planned QE3/4 $1tn expansion, then BoJ assets would need to expand by around JPY100tn to meet this target. The current BoJ holdings of JGBs just crossed JPY100tn – so this new printing is double the current holdings and considerably more than double the planned JPY44tn purchases for the year. Good luck with that given the expected JGB issuance this year is only around JPY44tn and good luck persuading anyone that the BoJ is not directly funding the government in the ultimate reacharound. As the Fed monetizes 1 year of Treasury issuance so the BoJ has to monetize over 2 years of JGB issuance – sustainable?