Japan’s ruling party has called for drastic monetary easing to devalue the yen by 30pc and halt the slide into deflation, putting it on a collision course with the Bank of Japan. 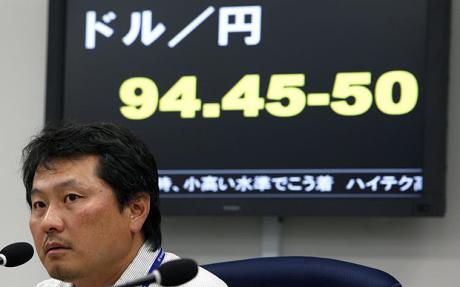 Lawmakers from the Democratic Party of Japan called for the exchange rate to be steered to ¥120 against the dollar, from around ¥90 currently. (Bloomberg)

A draft by 130 lawmakers from premier Yukio Hatoyama’s Democratic Party of Japan said the country needs a radical shift towards growth policies, calling for an inflation target above 2pc. The exchange rate should be steered to ¥120 against the dollar, from the current ¥90.

The Bank of Japan’s governor, Masaaki Shirakawa, told lawmakers that it would illegal to fund state spending by printing money. “History has proven that central banks directly buying government securities caused severe inflation and dealt a blow to the economy. The BoJ is now providing adequate funds,” he said.

Tokyo is still able to issue 10-year bonds at ultra-low rates of 1.4pc, relying on a captive savings market, even though gross public debt will reach 225pc of GDP this year, the highest in the world.

However, there are growing fears of a “malign scenario” where rising rates set off a debt compound spiral. The IMF has warned that borrowing costs may rise sharply as Japan’s aging crisis bites in earnest.

Junko Nishioka, an economist for RBS, said the BoJ is haunted by hyperinflation after World War Two. It is afraid debt monetisation could back-fire, triggering the very crisis that everybody fears. “We don’t think a fiscal accident is likely yet. Pension funds will keep buying debt for another five or six years. After that pressure increases,” she said.