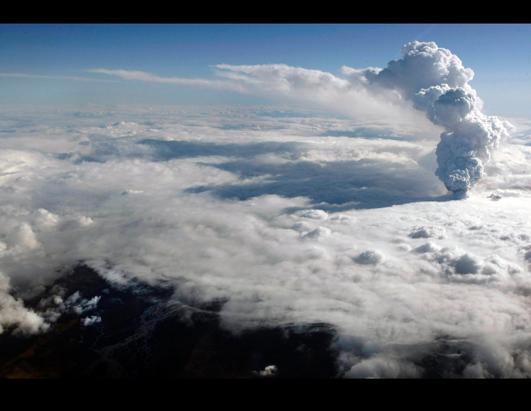 Smoke and steam is seen rising from the volcano under the Eyjafjallajokull glacier in Iceland, which erupted for the second time in less than a month. The eruption melted ice, shot smoke and steam into the air and forced hundreds of people to flee rising floodwaters. (AP)

Airports across Europe were thrown into chaos today after ash drifting from Iceland’s erupting volcano caused several countries to close their airspace.

The potentially dangerous cloud of ash and rock spewed up by the volcano more than 1,000 miles away caused the U.K., Norway, Ireland and Sweden to enforce a nationwide no fly policy, stranding thousands of travelers .

France has also announced some airport closures, and Holland, Belgium, Denmark and Germany are expected to follow suit.

“So we’re talking about almost one quarter of the entire European area is closed to aircraft at the moment.” Brian Flyn of EuroControl, a European aviation authority, told reporters.

It is not yet clear when the flying restrictions will be lifted, but the Eyjafjallajokull volcano is still erupting and could continue spewing ash into the atmosphere for weeks.

“It is likely that the production of ash will continue at a comparable level for some days or weeks,” said Einar Kjartansson, a geophysicist at the Icelandic Meteorological Office. “But where it disrupts travel, that depends on the weather.”

As the day wore on some travelers’ nerves were fraying.

“It’s almost like a joke: Volcano ash? It’s almost like, what’s the punch line?” said Erin Wilson, an advertising executive stranded at London’s Heathrow Airport who was hoping to return to Chicago to celebrate her birthday.

The United Kingdom and Scandinavia were the first hit by the vast cloud of ash this morning, and it is now heading for western Europe and could reach Russia early Friday morning. While the cloud itself is not harmful, residents of the northern Scottish island of Shetland complained of a strong smell of sulphur in the air.

U.K. controlled airspace is closed until 7 a.m. Friday, according to a statement on the NATS (National Air Traffic Services) Web site. The situation remains fluid, and the airspace could be closed for longer, Deborah Seymour, a NATS spokeswoman told ABC News.

The problem is twofold, according to Seymour. First, the volcano under the Eyjafjallajokull glacier is still erupting and therefore continues to pump out this potentially lethal ash, building up a bigger and bigger cloud. Secondly, the trajectory of the wind is pushing this ash cloud over the Atlantic straight toward the U.K. and northern Europe.

Not only would this volcanic cloud affect visibility, but it could also cause airplane engine failure.

“The large particles of rock, which have been blown into the upper atmosphere, are then ingested into the engines. These engines are delicate machines, the rocks clog the engines which means the engines die,” Aviation expert Chris Yates told ABC News.

The U.K. Met Office says the cloud was directly over Heathrow at around 11 a.m. local time.