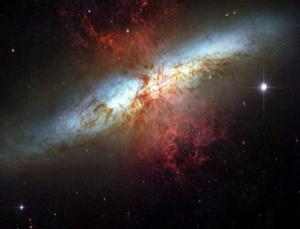 Something in there is producing an unusually regular radio signal (Image: NASA/ESA/STScI/AURA)

There is something strange in the cosmic neighbourhood. An unknown object in the nearby galaxy M82 has started sending out radio waves, and the emission does not look like anything seen anywhere in the universe before.

“We don’t know what it is,” says co-discoverer Tom Muxlow of Jodrell Bank Centre for Astrophysics near Macclesfield, UK.

The thing appeared in May last year, while Muxlow and his colleagues were monitoring an unrelated stellar explosion in M82 using the MERLIN network of radio telescopes in the UK. A bright spot of radio emission emerged over only a few days, quite rapidly in astronomical terms. Since then it has done very little except baffle astrophysicists.

It certainly does not fit the pattern of radio emissions from supernovae: they usually get brighter over a few weeks and then fade away over months, with the spectrum of the radiation changing all the while. The new source has hardly changed in brightness over the course of a year, and its spectrum is steady.

Yet it does seem to be moving – and fast: its apparent sideways velocity is four times the speed of light. Such apparent “superluminal” motion has been seen before in high-speed jets of material squirted out by some black holes. The stuff in these jets is moving towards us at a slight angle and travelling at a fair fraction of the speed of light, and the effects of relativity produce a kind of optical illusion that makes the motion appear superluminal.

Could the object be a black hole? It is not quite in the middle of M82, where astronomers would expect to find the kind of supermassive central black hole that most other galaxies have. Which leaves the possibility that it could be a smaller-scale “microquasar“.

A microquasar is formed after a very massive star explodes, leaving behind a black hole around 10 to 20 times the mass of the sun, which then starts feeding on gas from a surviving companion star. Microquasars do emit radio waves – but none seen in our galaxy is as bright as the new source in M82. Microquasars also produce plenty of X-rays, whereas no X-rays have been seen from the mystery object. “So that’s not right either”, Muxlow told New Scientist.

His best guess is still that the radio source is some kind of dense object accreting surrounding material, perhaps a large black hole or a black hole in an unusual environment. Perhaps the phenomenon also happens occasionally in our galaxy, but is more common in M82 because it is a “starburst” galaxy – a cosmic cauldron where massive stars are forming and exploding at a much higher rate than in the Milky Way, creating a lot of new black holes.