Much has been made of newly appointed uber-easer Abe’s plans to weaken the JPY by any means possible. Since the global financial crisis began in early 2008, USDJPY has tracked remarkably closely with the ratio of Federal Reserve assets to Bank of Japan assets – as the currency wars escalated. Assuming the Fed proceeds with its planned QE3/4 $1tn expansion, then BoJ assets would need to expand by around JPY100tn to meet this target. The current BoJ holdings of JGBs just crossed JPY100tn – so this new printing is double the current holdings and considerably more than double the planned JPY44tn purchases for the year. Good luck with that given the expected JGB issuance this year is only around JPY44tn and good luck persuading anyone that the BoJ is not directly funding the government in the ultimate reacharound. As the Fed monetizes 1 year of Treasury issuance so the BoJ has to monetize over 2 years of JGB issuance – sustainable?

The current collapse in USDJPY to 86 has actually recoupled with the
ratio at around 0.0184x (Fed 2.92tn / BoJ 157.833tn). This implies the market is priced for around JPY56tn of JPY printing already (25% more than planned); but, given the USDJPY
target of 90 that has been implicitly discussed, this would mean the ratio of
Fed/BoJ would need to drop to 0.0165x. 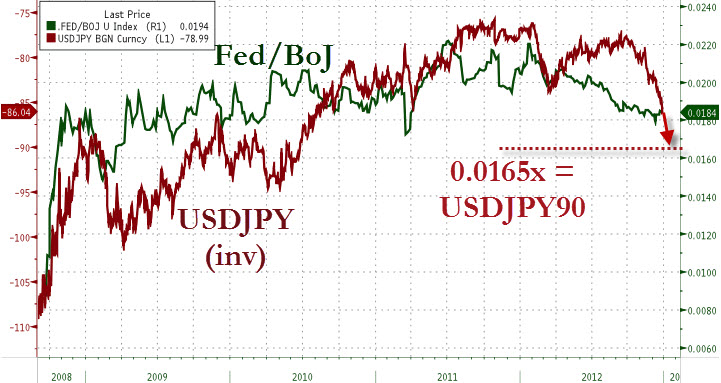 but given the Fed’s grand QE3/4 plan, the BoJ will have to be very aggressive to weaken the JPY – obviously – though monetizing double the planned JGB issuance this year seems like a stretch for even Abe (if he hopes to maintain any semblance of market confidence).