Earlier today, we highlighted a dramatic plunge in the Russian ruble which has crashed to record lows against the dollar after staging its steepest two-day decline in nine months.

The sharp (and seemingly inexorable) decline in crude prices combined with Western economic sanctions and geopolitical turmoil have weighed on the currency of late and in the midst of a new leg down in oil, investors appear to be panic selling.

“Some investors are selling at any price,” Bernd Berg, an emerging-markets strategist in London at Societe Generale told Bloomberg by e-mail.

And even as Russian central bank Deputy Chairman Vasily Pozdyshev swears “there’s no systemic risk,” the Bank of Russia has now called an emergency meeting with state-run and private lenders to discuss the FX bloodbath.

– Russian Ruble Crashes To Record Lows In “Panic”: “Some Investors Are Selling At Any Price”:

Late last month, we took a look at Russia’s economy and concluded that although the country has proven to be remarkably resilient in the face of collapsing crude prices, the outlook is darkening.

The ruble has fallen for three consecutive years and is now under immense pressure both from Western economic sanctions and from crude’s inexorable decline. “The wish to hedge potential risks from geopolitics and commodities may well push the ruble to 75,” Evgeny Koshelev, an analyst at Rosbank PJSC in Moscow, told Bloomberg by e-mail in December. “It will be interesting to see if there’s a reaction from the central bank, government and households to this weakening.”

Read moreRussian Ruble Crashes To Record Lows In “Panic”: “Some Investors Are Selling At Any Price”

Isolated Russia continues to see its currency dramatically outperform the US Dollar. Breaking below 50 today, this is the strongest the Ruble has been since Nov 2014… The Ruble is now up almost 22% against the US Dollar year-to-date. 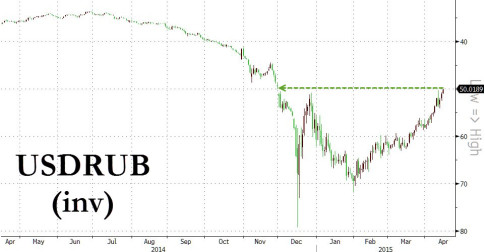 and best performing currency of the year… 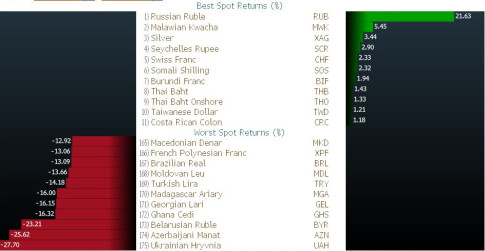 While the west huffs and puffs, and threatens to unleash even more “costs” on Russia in the form of additional sanctions which will assure that Europe’s latest deflationary recession is even more acute, an “isolated” Russia is looking to outside, and to the east, and as part of its most recent de-dollarization initiative, the Moscow Exchange announced it has started trading Chinese Renminbi-Russian Ruble currency futures.

Following the dramatic December surge in Russian interest rates when the Bank of Russia scrambled to preserve confidence in the then-plummeting currency and sent the interest rate to a whopping 17%, now that the oil price crash has stabilized it has been walking down this dramatic move, and after reducing rates by 2% on January 30 to 15%, moments ago the Bank of Russia once again cut rates this time by the expected 100 bps to 14%. The bank also said that more rate cuts are in the pipeline.

“It won’t be long before this chart is replicated in a whole lot of other places. But by then it will be too late to prepare. The gold will be gone …” 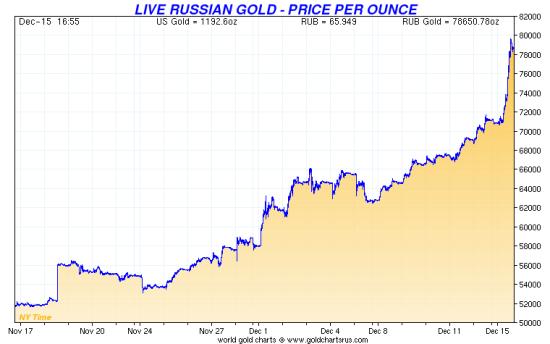 To say that gold is in a bear market is to misunderstand both gold and markets. Gold isn’t an investment that goes up and down. It is money in the most basic store-of-value sense. Most of the time it just sits there, and when its price changes in local currency terms that says more about the local currency than about gold.

But when currencies collapse, gold shines.

Consider the above from the point of view of a typical Russian. The ruble is tanking (no need to understand why — all fiat currencies go this way eventually and the proximate cause is almost irrelevant). Russians who trusted their government and kept their savings in, say, a bank account, are losing their shirts. But those who own boring, doesn’t-pay-interest, in-a-bear-market gold have seen their capital appreciate in local currency terms by about 60 percent in just the past month. They’re not “making money,” but they are preserving wealth.

Read moreThis Is What Gold (Always) Does In a Currency Crisis

The Russian economy is to start growing again in 2 years in the worst case scenario, President Vladimir Putin said at his annual press conference. Russia, which is facing recession, is ready to fight the impending crisis, as it did in 2008, he said.

“The economy will grow. And our economy will get out of the current situation,”Putin said, adding that he expected the economy to grow by 0.6 percent in 2014. He said the government will handle the crisis similarly to 2008.

In 2008, Russia along with the much of the rest of the world fell into recession, losing 7.8 percent of GDP in 2009. The Russian economy fared the crisis rather well, and the economy was back on track with 4.5 percent growth in 2010.

Russia’s 2014 budget will have a 1.9 percent surplus relative to GDP, despite the turbulent economic situation, the Russian president said. 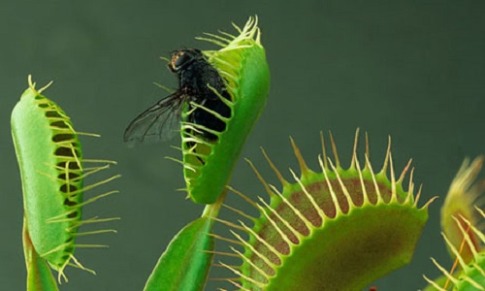 As I write this, the news is saturated with stories of a hostage situation possibly involving Islamic militants in Sydney, Australia. Like many, I am concerned about the shockwave such an event will create through our sociopolitical structures. However, while most of the world will be distracted by the outcome of this crisis (for good or bad) for at least the week, I find I must concern myself with a far more important and dangerous situation.

Up to 40 people may be held by a supposed extremist in Sydney,but the entire world is currently being held hostage economically by international banks. This is the crisis no one in the mainstream is talking about, so alternative analysts must.

As I predicted last month in “We Have Just Witnessed The Last Gasp Of The Global Economy,” severe volatility is now returning to global markets after the pre-game 10 percent drop in equities in October hinted at what was to come.

Read moreIMF Now Ready To Slam The Door On The U.S. And The Dollar 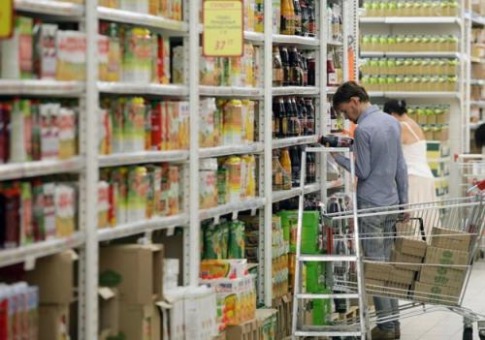 Until now, when it comes to the fallout in the Russian economy from the crude price plunge leading to a collapse in the Russian currency, most of the interest has been on how the Russian financial system recovers and/or survives and just as importantly, what Putin’s response would be. Just yesterday, we wrote that as a result of capital controls fears, many western banks led by Goldman Sachs had halted liquidity to Russian clients and other local entities.

However while the adverse impact on the Russian banking system has been mostly confined to the upper class – since there is virtually no middle class in the country to speak of – the second cold war of words, which rapidly morphed into a very hot financial war, is about to hit the very ordinary Russian on the street, because as Russia’s Vedomosti reports, citing vegetable producer Belaya Dacha, juice maker Sady Pridoniya and others, Russian suppliers are suspending food shipments to stores because of unpredictable FX movements. And it is about to get worse: very soon Russians may have to live without imported alcohol because at least on supplier of offshore booze, Simple, halted shipments in “a two-day pause” to see what happens with the ruble, Vedomosti reports.

The full story from Vedomosti:

After falling for 15 of the last 16 days, the RTS (Russian Stocks) are surging 17% today, extending gains post CBR 7 Measures, the most since October 2008.The Ruble is soaring also – back below 62/USD. 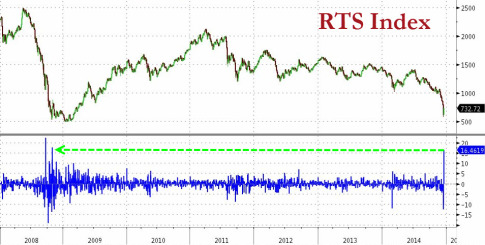 Juiced by the CBR Measures… 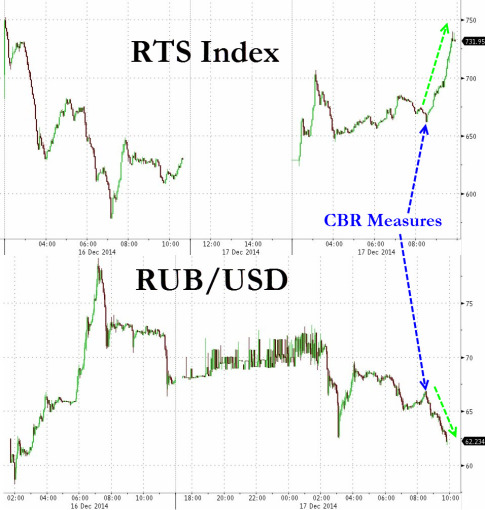