– Russian Ruble Crashes To Record Lows In “Panic”: “Some Investors Are Selling At Any Price”:

Late last month, we took a look at Russia’s economy and concluded that although the country has proven to be remarkably resilient in the face of collapsing crude prices, the outlook is darkening.

The ruble has fallen for three consecutive years and is now under immense pressure both from Western economic sanctions and from crude’s inexorable decline. “The wish to hedge potential risks from geopolitics and commodities may well push the ruble to 75,” Evgeny Koshelev, an analyst at Rosbank PJSC in Moscow, told Bloomberg by e-mail in December. “It will be interesting to see if there’s a reaction from the central bank, government and households to this weakening.”

Koshelev’s warning proved prescient. Oil prices continued to slide in the new year as uncertainty out of China, a dour outlook for global growth and trade (see the IMF’s latest cut to global growth forecasts), and the prospect of increased Iranian supply weighed on a market that was already “drowning” in oversupply, to quote the IEA.

Meanwhile, the geopolitical situation took a nasty turn for the worst earlier this month when Saudi Arabia irked the Shiite world with the execution of Sheikh Nimr al-Nimr, whose death adds fuel to the sectarian fires already burning in Syria, Iraq, and Yemen. Thanks to Moscow’s intervention on behalf of Bashar al-Assad, Russia is now inextricably bound up in the melee.

Against this backdrop, the ruble has collapsed to fresh record lows and on Thursday marked its steepest two-day decline in nine months, falling beyond 85 per USD.

“After the ruble crossed the psychological level of 80, traders sharply accelerated their selling,” Alexei Egorov, an analyst at Promsvyazbank in Moscow told Bloomberg. “The ruble is catching up with oil as investors review their view on Russian assets.”

The decline has analysts pondering The Kremlin’s next move. “Any form of interventions might be the least preferred option from the CBR perspective, given their preference of having as much FX reserves as possible,” ING’s chief Russia economist Dmitry Polevoy says, in a note. “And a rate hike might be politically difficult, even though we think the CBR will have room to choose without big pressure from the government officials, if needed to do so,” he adds, noting that procyclical measures and outright FX market intervention are both on the table at this point. This week’s decline “raises [the] stakes for the CBR, if today’s signs of FX market panic passes through to retail flows from households,” he goes on to warn.

“It’s falling faster than any other currency as we see panic selling in the ruble after it breached the 80 per USD level,” Bernd Berg, an emerging-markets strategist in London at Societe Generale told Bloomberg by e-mail. “Some investors are selling at any price,” he cautions, before predicting that the RUB could fall below 100 per USD if crude continues to slide.

Maybe not, but if the RUB stays in the mid-80s, inflation will likely be running at 8% or more by year end and you’re reminded that Russia’s 3% budget deficit target assumes $50 per barrel crude. If prices remain below $30, the Russian economy could contract by 5% or more this year and the deficit could balloon by at least 1.4%. 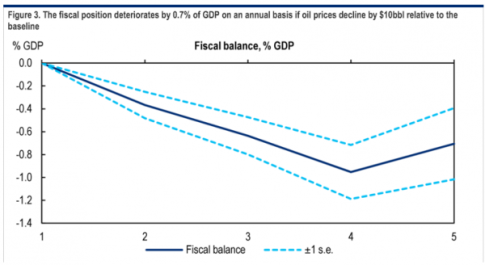 For now, Russia seems to be betting that the economy (not to mention the populace) can weather the storm, given that the country continues to contribute to the global deflationary supply glut by pumping at record levels.

Time will tell how long the Russian people are willing to stomach what’s shaping up to be a nasty bout of stagflation.