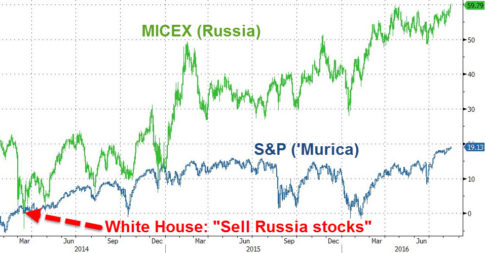 Russia’s MICEX stock index rallied to all-time record highs today. This is likely very disconcerting for The White House as since the March 2014 lows when they issued the following statement: “If I were you, I wouldn’t invest in Russian equities right now,” Russian stocks are up 60% – tripling the 19% gains in the S&P off those lows…

No end seems to be in sight for the plight of the Russian ruble, which slumped to new record lows against hard currencies Tuesday. The EUR traded at 93.5 against the ruble, and the USD at 75.

The emergency interest rate hike to 17 percent has failed to halt the ruble’s landslide tumble against hard currencies. The rate increase only calmed the ruble temporarily. 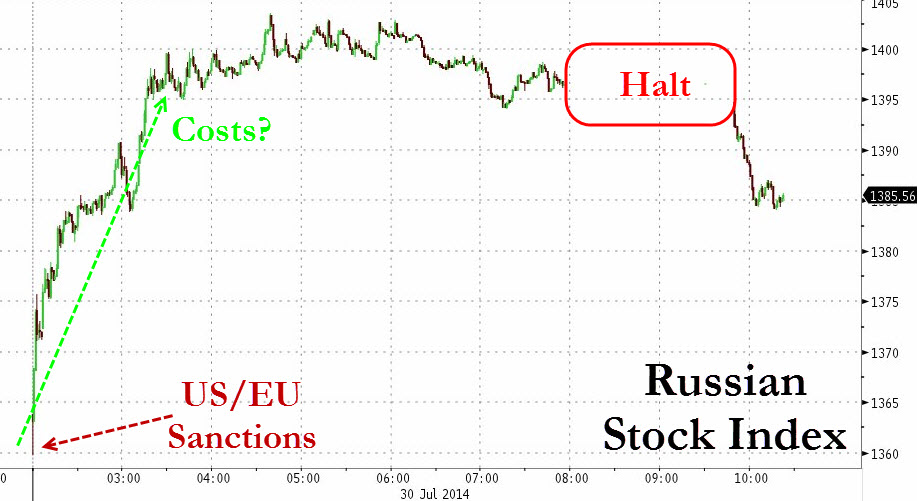 Following a 150bps rate hike by the central bank – the largest since the 1998 default –desperate to halt capital outflows and a collapsing currency, Russian stocks have crashed 11% led by some of the country’s largest banks. USDRUB rose to just shy of 37 – the weakest RUB rate on record – but rallied back a little on the rate hike but the MICEX stock index tumbled 11% to almost 2-year lows with Sberbank (Russia’s largest bank) down 17% and VTB (2nd largest bank) down 20%. Between the threat of economic sanctions from the West and simple risk-aversion-based capital flight, as one analyst noted, “uncertainty risks a further escalation in domestic capital outflow.”

MICEX is down 11% today alone… 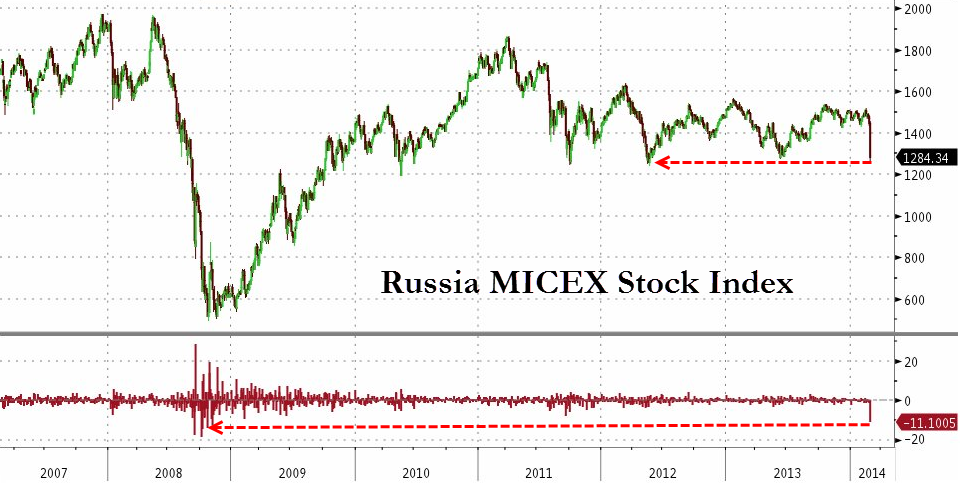 Ruble at record lows against the USD…

– Russia Will Not Reopen: “The Situation Has Been Recognized As An Emergency” (ZeroHedge, April 23, 2012):

One temporary halt and three delay attempts later, and we get…. this.

Yes, this is the Russian stock market.

All trading on Russia’s MICEX stock exchange has been halted until 17:15 GMT. Next up: our very own Rule 48.