No end seems to be in sight for the plight of the Russian ruble, which slumped to new record lows against hard currencies Tuesday. The EUR traded at 93.5 against the ruble, and the USD at 75.

The emergency interest rate hike to 17 percent has failed to halt the ruble’s landslide tumble against hard currencies. The rate increase only calmed the ruble temporarily.

It has accelerated its descent in November and December along with falling oil prices. Investors have been pulling capital out of Russia over geopolitics since earlier this year, and sanctions levied by the US and EU have essentially cut Russia off from Western lending.

Most analysts agree that Russia will enter recession in the first quarter of 2015, including the Economy Minister Aleksey Ulyukaev, and the Central Bank. 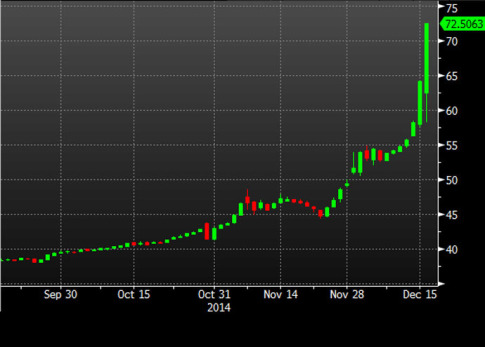 Ruble on the run, losing more than 20% against the USD Tuesday, hitting 73.82. Source: Forexlive.com

On Tuesday, the CBR chief Elvira Nabiullina said a higher rate should put an end to investor speculation that has been hitting the ruble.

“We must learn to live in a new reality, to focus more on our own resources to finance projects and give import substitution a chance,” the bank chief said in a televised address Tuesday. 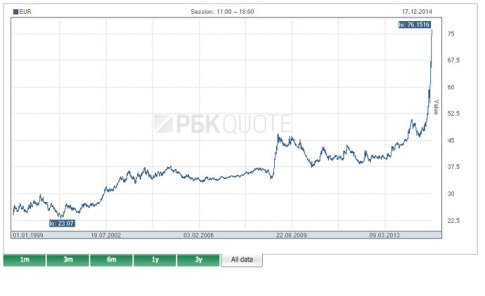 However, neither the rate increase nor the comments have had a big impact on ruble trading as it continued to slide. Russia’s currency has lost more than 55 percent against the dollar this year, mostly to external factors such as slumping oil and sanctions against Russia.