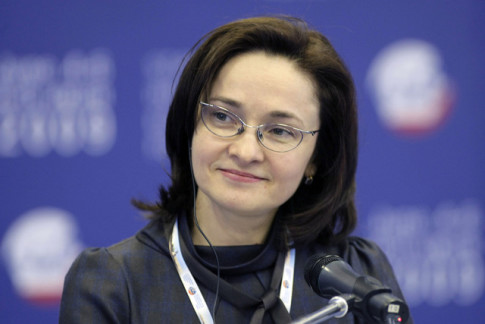 – Russia’s Central Bank Governor Is Way Smarter Than Ours (The Automatic Earth, April 8, 2015):

It wouldn’t be a first, but it would certainly be a – bigger – shock. That is to say, the Bank of England hijacked the head of Canada’s central bank some time ago, but, while unexpected enough, that would pale in comparison to the US hiring the present Governor of the Russian central bank, Elvira Sakhipzadovna Nabiullina. It would still seem to be a mighty fine idea, though.

Not that I think it will happen, not to worry if you think Yellen is just what it takes at the Fed. But Nabiullina is both razor sharp and fiercely independent. Yellen is obviously neither; she’s a cog in a machine that huffs and puffs and pumps and dumps to make sure her overlords in the blissful world of US finance make ever more profit no matter how bad things get in American society.

Read moreRussia’s Central Bank Governor Is Way Smarter Than Ours

Following the dramatic December surge in Russian interest rates when the Bank of Russia scrambled to preserve confidence in the then-plummeting currency and sent the interest rate to a whopping 17%, now that the oil price crash has stabilized it has been walking down this dramatic move, and after reducing rates by 2% on January 30 to 15%, moments ago the Bank of Russia once again cut rates this time by the expected 100 bps to 14%. The bank also said that more rate cuts are in the pipeline.