Recently, not a day passes without the Russian Ruble hitting new record lows against the US Dollar due to a combination of both capital outflows from Russia, tumbling prices of crude – Moscow’s most important export – which deteriorates Russia trade and current account position, coupled with the most acute USD strengthening in history in the past few months over fears of a tightening Fed.

Yet for whatever the reason, after stoically ignoring the impact of its tumbling currency on the domestic economy (and as a reminder, Japan would kill for a currency collapse of this magnitude: just think of the “economic renaissance” that would result if only Abenomics was right about killing your currency leading to growth… which it isn’t), the Kremlin is finally starting to feel the pinch leading to the biggest central bank intervention in FX markets since the start of the Ukraine campaign, buying Rubles for a third consecutive day at an amount of over $2 billion, with $1.75 billion purchased in the first two days of the current intervention attempt, and another $420 million in foreign currencies sold overnight according to Bank of Russia data. 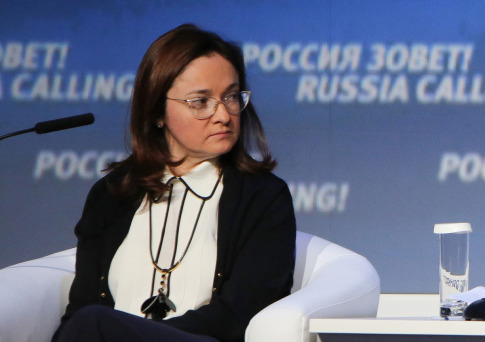 Bloomberg adds that the bank also said it shifted the upper boundary of the currency’s trading band by 5 kopeks yesterday, a move that may have taken its spending to $2 billion in the past three trading days. The exchange rate was little changed at 44.7546 versus the dollar- euro basket as of 12:01 p.m. in Moscow today.

The currency sales underscore the price President Vladimir Putin is paying for his country’s annexation of Crimea and alleged support for rebels in eastern Ukraine. The U.S. and Europe have imposed sanctions on Russian individuals and companies that have curbed access to overseas financing and fueled an exodus of foreign capital just as a drop in the price of crude oil saps export revenue.

“The declining oil price and local demand for foreign currency force the central bank to intervene and move the band,” Dmitry Polevoy, the chief economist for Russia at ING Groep NV in Moscow, said in an e-mailed note. “Only the tax period can alleviate this tension.”

The Bank of Russia will probably need to spend as much as $30 billion by year-end to slow the decline in the ruble, which lost 14 percent against the dollar last quarter, according to UralSib Capital. Crude oil, which brings Russia half of its state budget revenue along with natural gas, fell 1.5 percent to $90.76 per barrel in London, the lowest in more than two years.

The net impact of all this intervention has been a 10% decline in Russia’s FX reserves, which have fallen by the equivalent of $55 billion in 2014 to a four-year low of $456.8 billion last week, poised for the biggest annual decrease since 2008, when the cash pile slid $160 billion from an August peak through year-end amid central bank efforts to stem the ruble’s drop.

It is likely that USD demand will increase in the coming months, putting more pressure on the Bank of Russia: as Russian companies contend with $54.7 billion of debt repayments in the next three months, according to central bank data. Local tax payments in the second half of the month can support the ruble as exporters convert their foreign-currency revenue.

Meanwhile, as much as Russia wants to telegraph that western sanctions are not hurting it nearly as much as they are Europe (where the recent escalation in political hostilities between West and East has undoubtedly accelerated Europe’s tumble into a triple-dip recession), the reality is that they are. A quick example from BBG:

There are many ways to measure the deepening financial crisis spreading across Russia. The ruble is sinking more than any other currency in the world, foreign reserves have plunged to a four-year low and the economy is teetering toward recession.

Galina Mityaeva measures it in centimeters.

The half stick of braunschweiger sausage that the 69-year-old retiree used to buy for her husband each week is now just too expensive. Cut it a little shorter, she instructs the deli counter clerks at the supermarket she shops at outside of Moscow — a quarter stick will have to suffice.

“Every time I go to the store, food is more expensive,” Mityaeva said as she strolled through the grocery aisles on a recent afternoon. “People are angry right now. In the store lines, you can hear people complaining: ‘What can I afford to buy with 1,000 rubles?’”

Seven months after President Vladimir Putin initiated his foray into Ukraine, triggering international sanctions against Russia and the capital flight that has fueled the ruble’s plunge, consumers across Moscow are feeling the squeeze. Annual inflation soared to a three-year high of 8 percent last month, led by a 17 percent surge in prices on meat and poultry, 28 percent on tobacco and 13 percent on international airfare and travel-related services.

Natalya Lomteva scoffs at the idea of taking a trip abroad, which she calls “impossible to afford.” A 20-year-old college student, she’s more focused on scrimping together the money to fund her pack-a-day smoking habit and finding restaurants that she can still afford. With temperatures dropping as winter approaches, an inexpensive place to gather with friends indoors takes on added value, she said.

“During the summer, we could at least hang out at parks,” Lomteva said while nursing a cup of tea at a coffee house that she called a “cheap option” in the northwest Moscow district of Shchukino. She said that one of her favorite haunts, Beverly Hills Diner, has become too expensive after rising food costs pushed up prices on a menu dominated by hamburgers and other American-style fare.

And yet, the irony is that despite the people’s hardships, Putin’s popularity is still the highest it has ever been: “His approval rating rose to 86 percent in September from 65 percent in January, according to pollster Levada Center, which surveyed 1,600 people across Russia over four days.”

One wonders if this is due to Russia’s innate (and historically proven) ability to handle misfortune far better than the west, or simply people are happy to suffer out of spite if it means that their adversaries will suffer even more. For now, this angle is working, because a recession in Europe should more than offset a recession in Russian, if only through the prism of nationalist pride. Additionally, Russia’s key opponent, Ukraine, is not doing any better as shown by these two headlines that just hit the tape:

And yet one wonders how much longer Russia can sustain this: the best confirmation that things may be spiraling out of control for the Kremlin comes from Russia’s finance minister who said on Tuesday the country could no longer afford a multi-billion-dollar revamp of the armed forces approved by President Vladimir Putin, stepping up a campaign to trim spending as sanctions over the Ukraine crisis bite.

Anton Siluanov said a new defense program should be drawn up to take into account the changed economic situation, even though the deputy prime minister in charge of the sector has been ruling out any cuts in military spending. “A new defense program will be prepared now, and in its framework we want to reconsider the amount of resources that will be spent from the budget in order to make it more realistic,” said Siluanov, appointed three years ago after his veteran predecessor, Alexei Kudrin, quit in protest over the proposed military spending.

Siluanov’s comments highlight a battle among different factions of the government over defense spending which has heated up in recent months, and which will ultimately be resolved by Putin himself.

They could indicate the president is preparing the way to postpone or trim some defense spending, foreseen at 23 trillion roubles ($576 billion) in the decade to 2020 under his original plan to upgrade 70 percent of military equipment by then.

“Since all such final decisions are made in the Kremlin, the decision about fine-tuning of the program will be made in the Kremlin and opponents of the finance ministry’s proposals to adjust it will have to obey,” said Ivan Konovalov, head of the Moscow-based Center for Strategic Trends Studies.

In other words, the sanctions foreplay of the past year is finally coming to a head, and very soon one party or the other, either Europe or the Kremlin will have to cry uncle. That event, and what follows immediately after, should be the most interesting development of the next 3-6 months.

And even then, a worst case outcome for Putin, one that involves a currency crisis, may be a blessing in disguise, because at the end of the day Russia still has what everyone needs: energy. The only question is how it is denominated. And if anything, this ongoing capital account crisis, will merely force the Kremlin to accelerate its shift away from the Petrodollar to the Gas-o-Yuan (as dubbed here first), as Russia has been hinting for a year it would do regardless. Perhaps a little incentive to pull the bandaid is just what Moscow needs…