Allegations of JP Morgan’s use of clever tactics to bribe Chinese officials recently received mainstream attention when Salon journalist Alex Pareene mentioned it in a comical and classic interview on CNBC (you need to watch the video before reading this) with presstitute Maria Bartiromo. When Mr.Pareene mentioned these claims against the TBTF bank, CNBC mocked him for the fact that his information had come from the New York Times. Well it appears the paper has now given CNBC a taste of its own medicine; with some actual real reporting, something the clownish financial-tv channel drowning in a zero ratings death spiral doesn’t seem all that interested in doing.

This article from the New York Times details how JP Morgan paid $75,000 a month to an obscure consulting firm called Fullmark Consultants, which had only two employees. The firm was run by a woman named Lily Chang, which in reality was the alias used by Wen Jiabao’s only daughter Wen Ruchun. Wen Jiabao was the Prime Minister of China at the time.

Unsurprisingly, many lucrative deals followed for the JP Morgan in China. How about we #AskJPM about that.

More from the NY Times:

To promote its standing in China, JPMorgan Chase turned to a seemingly obscure consulting firm run by a 32-year-old executive named Lily Chang.

Ms. Chang’s firm, which received a $75,000-a-month contract from JPMorgan, appeared to have only two employees. And on the surface, Ms. Chang lacked the influence and public name recognition needed to unlock business for the bank.

But what was known to JPMorgan executives in Hong Kong, and some executives at other major companies, was that “Lily Chang” was not her real name. It was an alias for Wen Ruchun, the only daughter of Wen Jiabao, who at the time was China’s prime minister, with oversight of the economy and its financial institutions.

I have ‘some’ great difficulty to buy that they have really eaten vegetables and fruits from Fukushima and here is why:

– I ate Hu Jintao’s dinner; China’s president, and the rest of the politburo eat only organic food:

And it really doesn’t matter whether they have eaten Fukushima produce or not, but if you eat it you will suffer greatly from it. 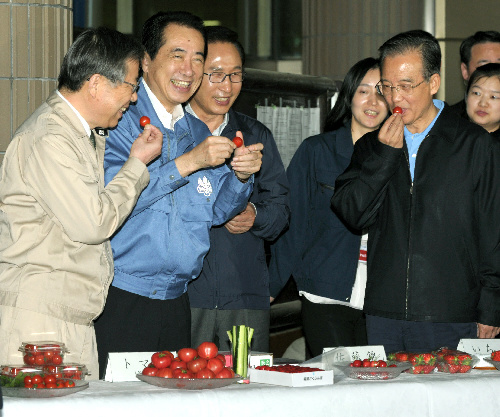 It was not enough for Prime Minister Kan to make the Emperor and Empress of Japan visit Fukushima, have them eat Fukushima food and bring some back home as souvenirs for the imperial household that has small children (including the future emperor of Japan).

Chinese Premier Wen Jiabao and Korean President Lee Myung-bak had to go along with Kan, visit Fukushima, and do the obligatory “It’s so delicious it is safe” performance by eating cherries and cucumbers grown in Fukushima to counter “baseless rumors” that the food may be contaminated with radioactive materials. (Radiation is a rumor, and safety is a religion in Japan among TPTB, in case you haven’t noticed.)

They are in Japan for the trilateral summit (which by itself irks a growing number of Japanese, but that will be another post).

On the afternoon of May 11, the three premiers visited one of the evacuation shelters (a large gym run by the prefectural government) in Fukushima City. Prime Minister Kan approached Premier Wen and President Lee and invited them over to the table where the vegetables and fruits produced in Fukushima were displayed. There were asparagus, tomatoes, strawberries. The three sampled cherries and ate cucumbers.

President Lee dedicated flowers and prayed for the earthquake and tsunami victims in Natori City, and said “All citizens of Korea have told me to convey their deep sympathy to the Japanese. The courage and the stoicism of the Japanese people (after the quake/tsunami) has so impressed the world.”

Well, I wish they hadn’t been so orderly and stoic. For their stoicity and perseverance, many of them are still living in shelters, sleeping on a floor of a gym and other cavernous public halls, partitioned by cardboard.

I have nothing more to say about this silly performance by old men eating Fukushima vegetables, other than: “When these people say it’s safe, don’t buy, don’t eat.” 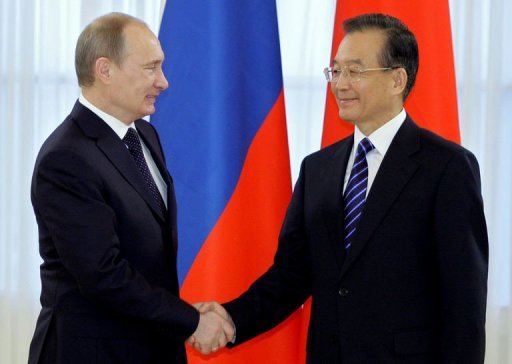 SAINT PETERSBURG (AFP) — Prime Minister Vladimir Putin said on Tuesday the Chinese yuan would soon start trading in Russia as the countries seek to challenge the dollar and promote the use of national currencies.

“We agreed to expand the possibilities for application of national currencies during trade and economic contacts,” Putin said after talks with Chinese Premier Wen Jiabao in the former Imperial capital Saint Petersburg.

“Now the ruble started trading on the exchange in China and the yuan trade will begin in Moscow in early December,” Putin said, hailing the move as a “serious step” on the path to strengthening economic ties.

On Monday, China conducted the first yuan trade with the Russian ruble in order “to promote the bilateral trade between China and Russia” and to reduce the conversion cost among other tasks, said a statement posted on the website of the China Foreign Exchange Trade System. 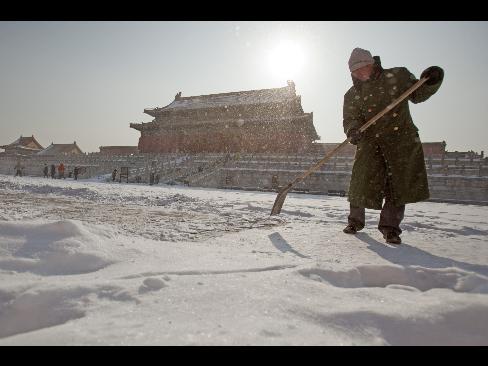 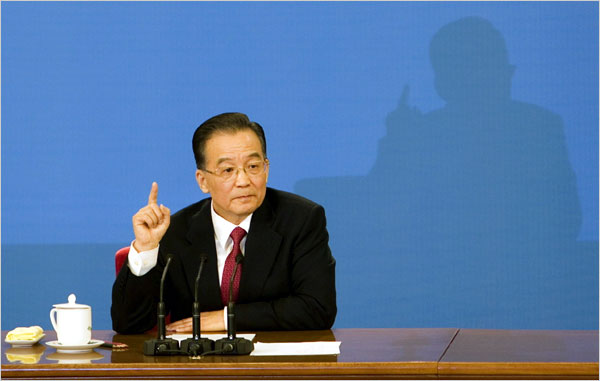 The Chinese premier Wen Jiabao spoke at a news conference on Thursday at the end of the Chinese parliament’s annual session.

BEIJING — The Chinese premier Wen Jiabao expressed concern on Friday about the safety of China’s $1 trillion investment in American government debt, the world’s largest such holding, and urged the Obama administration to provide assurances that its investment would keep its value in the face of a global financial crisis.

The Chinese premier Wen Jiabao spoke at a news conference on Thursday at the end of the Chinese parliament’s annual session.

Speaking at a news conference at the end of the Chinese parliament’s annual session, Mr. Wen said he was “worried” about China’s holdings of Treasury bonds and other debt, and that China was watching United States economic developments closely.

“President Obama and his new government have adopted a series of measures to deal with the financial crisis. We have expectations as to the effects of these measures,” Mr. Wen said. “We have lent a huge amount of money to the U.S. Of course we are concerned about the safety of our assets. To be honest, I am definitely a little worried.”

Read moreChina’s Leader Says He Is Worried Over U.S. Treasuries 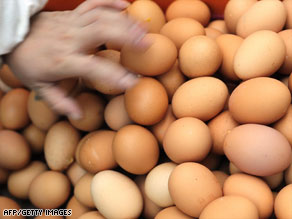 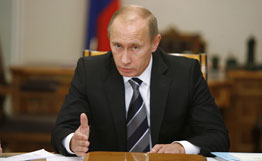 “We should consider improving the payment system for bilateral trade, including by gradually adopting a broader use of national currencies,” Putin told a bilateral economic forum.

He admitted the task would be tough, but said it was necessary amid the current problems with the dollar-based global economy.

Aug. 22 (Bloomberg) — A failure of U.S. mortgage finance companies Fannie Mae and Freddie Mac could be a catastrophe for the global financial system, said Yu Yongding, a former adviser to China’s central bank.

“If the U.S. government allows Fannie and Freddie to fail and international investors are not compensated adequately, the consequences will be catastrophic,” Yu said in e-mailed answers to questions yesterday. “If it is not the end of the world, it is the end of the current international financial system.”

Freddie and Fannie shares touched 20-year lows yesterday on speculation that a government bailout will leave the stocks worthless. Treasury Secretary Henry Paulson won approval from the U.S. Congress last month to pump unlimited amounts of capital into the companies in an emergency.