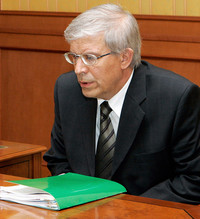 Feb 07 (Bloomberg) — Russia, the only one of the so-called BRIC countries without capital controls, is following China and Turkey in relying on reserve requirements to drain cash from the economy and avoid luring more speculative investment.

“We stand ready to continue increasing mandatory requirements, if needed,” Bank Rossii Chairman Sergey Ignatiev said in Frankfurt on Feb. 4. Policy makers will “act decisively to meet the forecast” for 2011 annual inflation of between 6 percent and 7 percent, he said.

The central bank on Jan. 31 increased the mandatory reserve ratio while unexpectedly leaving its deposit rates unchanged after inflation in January accelerated to the fastest in 15 months. Policy makers cited the threat of rising capital inflows driven by higher oil prices.

Emerging economies are weighing the need to curb inflation against the risk of attracting speculative capital from near- zero interest rates in the U.S. and Europe. The threat of a stronger ruble and stifled exports may be a “big headache” for Russia, central banker Alexei Ulyukayev said last month.

The ruble is the third-best performer against the dollar this among more than 20 emerging-market currencies tracked by Bloomberg, having gained 3.9 percent.

The Russian currency was little changed today, trading at 29.3875 per dollar at 1:35 p.m. in Moscow, near the strongest level in nine months. It reached 34.11 against the target dollar-euro basket used by the central bank to limit swings that disadvantage exporters, the strongest since August. The basket rate is calculated by multiplying the dollar-ruble rate by 0.55, the euro-ruble rate by 0.45, then adding them together.

Consumer prices in January surged 9.6 percent from a year earlier, triggered by the worst drought in at least 50 years, while monthly inflation was 2.4 percent, the quickest in two years. Grain costs climbed an annual 70 percent last month and fruit and vegetables increased 51 percent.

Central bankers have kept the benchmark refinancing rate at a record-low 7.75 percent since June, opting to increase the deposit rate in December. They last week raised the mandatory reserve level for liabilities to 3.5 percent for non-resident companies and 3 percent for individuals and others, both from 2.5 percent.

The policy response in countries including Turkey and Russia is “highly unorthodox” and may lead to more aggressive rate increases as inflationary expectations mount, said Maria Gordon, a London-based emerging-market equity portfolio manager at Pacific Investment Management Co., which oversees about $1.2 trillion.

“I would be looking for a combination of maximum fears, when the local markets will start pricing in a large degree of tightening and I would start taking positions on interest-rate sensitive stocks,” she said in an interview in Moscow on Feb. 3, without specifying companies.

Traders are pricing in 0.87 percentage point of rate increases over the next three months, forward rate agreements show. Expectations on Jan. 26 were the highest in more than a year, with the forwards signaling bets for 1.15 percentage points, data compiled by Bloomberg show.

Emerging markets risk a “hard landing” as they start raising interest rates to fight inflation, Nouriel Roubini, the New York University professor who predicted the credit crisis, said at a conference in Moscow on Feb. 3.

China set record-high reserve requirements, raising the level four times in about two months. Latin American nations from Brazil to Peru are lifting the ratios and returning to capital controls to stem a rally in their currencies.

Bank Rossii raised the reserve level for liabilities to the highest since 2008 after lowering the ratio at the height of the financial crisis that year to help lenders weather the credit squeeze. It last lifted the requirement level in August 2009.

Banks including OAO Sberbank and VTB Group, the country’s two largest, may need to set aside about 100 billion rubles to meet the new requirements, according to calculations by BNP Paribas and ZAO Raiffeisenbank.

Policy makers in Moscow are also reluctant to increase interest rates to avoid throttling economic growth, which they said is “uncertain.” Gross domestic product grew 4 percent in 2010 after shrinking 7.8 percent a year earlier.

The government predicts GDP will rise 4.2 percent this year, or less than half the 10 percent target set by President Dmitry Medvedev to pull the country in line with China, Brazil and India.

“Raising reserve requirements is the only available instrument for monetary tightening in these conditions,” Pavel Pikulev, a Moscow-based fixed-income strategist in Moscow at OAO Gazprombank, the lending arm of Russia’s gas export monopoly, said by phone on Feb. 4. “There’s a risk that the central bank will later hike rates more aggressively than it would like now.”

The wide differential between domestic and external borrowing costs and the risk of spurring speculative inflows are among the factors “we always take into account” when discussing a rate increase, Ignatiev told reporters on Dec. 8.

Capital inflows in 2011 may exceed the official estimate for $15 billion after three years of capital flight, Ulyukayev said on Jan. 21. Turkey the previous day reduced its benchmark rate for a second month and said it will continue to raise reserve requirements after lifting in December the ratio for deposits and savings of up to one month to 8 percent from 6 percent.

“In many countries around the world there are more active policies aimed at preventing capital inflows,” Stiglitz said. There’s “more sensitivity on monetary policy, keeping the interest rate down and using other instruments like reserve requirements to restrain domestic aggregate demand. You see a lot of interesting experiments going on.”