On September 21, 2010 I published an article entitled “More Forensic Evidence of Gold & Silver Price Manipulation”. In that article I showed how silver from 2003 to 2010 had never traded freely at all; I showed that silver was algorithmically traded with gold and there was a very clear relationship between the price of gold and the price of silver. For those who haven’t read the previous article the following figure 1 (figure 4 in the previous article) demonstrates the inter-relationship. 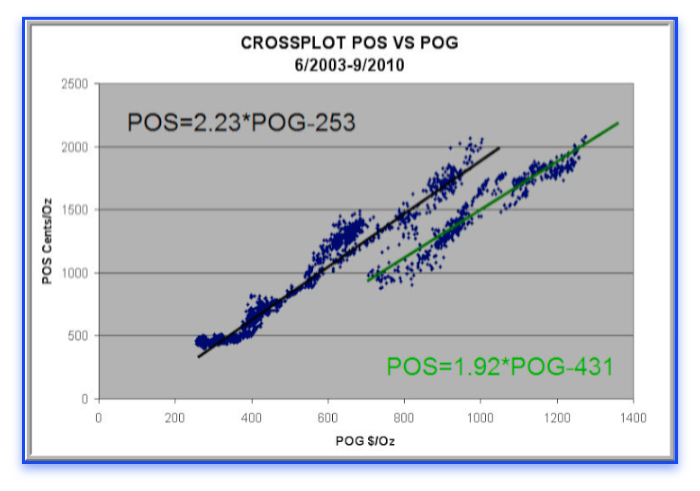 Figure 1 is a cross-plot of the price of gold against the price of silver for every trading day from June 2003 to September 2010. There are two linear relationships, one is pre-2008 (black line) and the second is post 2008 (green line). The best fit equations for the two data sets are also given on the chart.

The stunning revelation from the data analysis was that if on any day I knew what the price of gold was I would be able to calculate the silver price from the equation of the relationship! How is that possible in a free market? It simply is not possible and so the conclusion is that silver is not in a free market but is manipulated to move algorithmically with the price of gold. I have written many articles that show that gold is itself manipulated and suppressed (for example, see Gold Market is not “Fixed”, it’s Rigged)

I have updated the chart of Figure 1 which is shown in Figure 2. 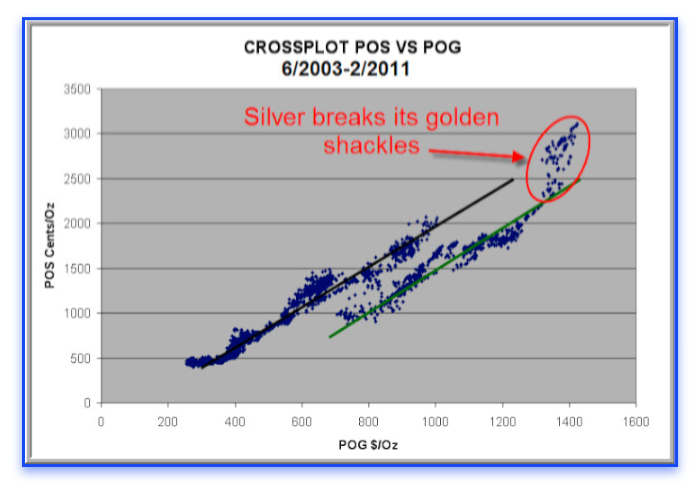 Since September 2010 silver has broken its golden shackles. The algorithmic trading that kept the price of silver subdued for seven years has been completely annihilated.

On Friday silver closed in complete backwardation on the Comex. Spot silver closed at $29.075/oz while FEB 2011 closed at $29.064/oz and DEC 2015 closed at $29.026/oz. I believe this is the first time in history that this has happened. Silver traded in backwardation between the spot price and futures contract up to one year out during the blatantly manipulative precious metals bashing of January, but now the entire futures structure is in backwardation. This is a sure sign there are shortages of silver because it means that buyers will pay a premium for silver delivered sooner rather than later.

Signs of shortages have also been apparent from a shrinking silver inventory on the Comex in the face of rising prices. The registered inventory stands at a paltry 43 Mozs. In addition there is lots of anecdotal evidence that there are tight supplies everywhere. There are reports of refineries refusing to take new orders due to insufficient silver feedstock.

News out of China recently showed that China’s net imports of silver quadrupled in 2010 to 3,500 tonnes (112 Million ozs). China has traditionally been a silver exporter. For example, in 2005 China made net exports of 3,000 tonnes of silver.

The US mint reported last week a record month in silver eagle sales in January of 6.4 million ozs.

This update of my previous work adds more fuel to the fire that the dynamics of the silver market have dramatically changed. Because silver has been suppressed for so long we do not know what its free market price should be, but we are going to find out soon and I strongly suspect it will be many multiples of the current price.

Market Force Analysis is a unique analysis method which provides reliable indications of market turning points and when is a good time to enter, take some profits or exit a market. Subscribers receive bi-weekly bulletins on the markets to which they subscribe. We also run a Hotlist of Junior Mining Stocks which we consider will yield outstanding returns.