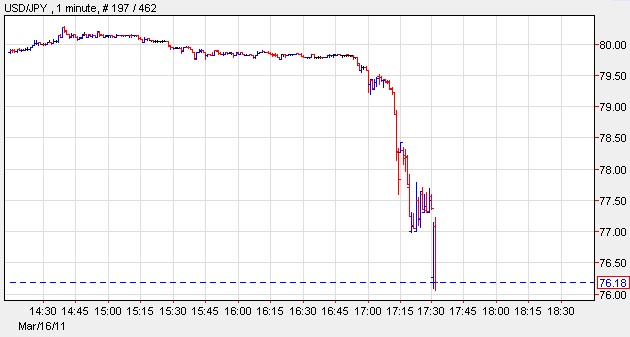 Support broken as the dollar yen plunges to an all time record low. Everyone now watching the Nikkei to see if it opens. That the BOJ has not intervened yet is beyond ominous, and nothing short of a death sentence for the Yen carry traders.

One can only watch this devastation with horror. USDJPY drops to 76. Unbelievable. Many Wall Street FX desks are blowing up right at this moment.

– John Noyce Is First With Technical USDJPY Observations: “If The Down Move Continues, 71.70 Is Next” (ZeroHedge):

Goldman’s John Noyce is the first FX technician with a proposed take on tonight’s stunning developments. Keep in mind, he, like everyone else is in uncharted (pardon the pun) territory.

The market has been below this region intraday, but, the NY 5pm close was at 77.90 according to the EBS data we use. If we were able to stabilise around 77.75-77.56 you could argue that the last part of the drop was set in an extreme situation with poor liquidity etc. definitely something to watch closely. Not to say the call was for a move this sharp in the first place, but with the help of hindsight on two counts you could argue “target met”.

..If.. the down move does continue the next really clean level is the actual parallel channel support off the August ’98 high which comes in at 71.70 on the linear scale chart.