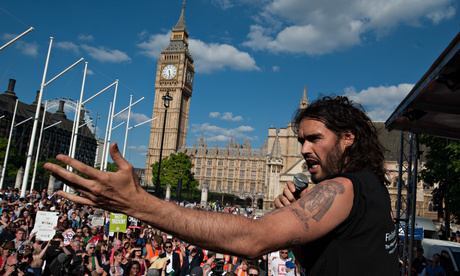 The greatest problem we have is misinformation. People simply do not comprehend why and how the economic policies of the post-war era are imploding. This whole agenda of socialism has sold a Utopian idea that the State is there for the people yet it is run by lawyers following their own self-interest. The pensions created for those in government drive the cost of government up exponentially with time. The political forces blame the rich and this merely creates a class warfare with no resolution for the future. Even confiscating all the wealth of the so-called rich will not sustain the system. Consequently, we just have to crash and burn and start all over again.

The Guardian reported that some 50,000 people marched in London to protest against austerity. They cried: “Who is really responsible for the mess this country is in? Is it the Polish fruit pickers or the Nigerian nurses? Or is it the bankers who plunged it into economic disaster – or the tax avoiders? It is selective anger.”

– What A Confidential 1974 Memo To Paul Volcker Reveals About America’s True Views On Gold, Reserve Currency And “PetroGold” (ZeroHedge, Nov 11, 2013):

Just over four years ago, we highlighted a recently declassified top secret 1968 telegram to the Secretary of State from the American Embassy in Paris, in which the big picture thinking behind the creation of the IMF’s Special Drawing Right (rolled out shortly thereafter in 1969), or SDRs, was laid out. In that memo it was revealed that despite what some may think, the fundamental driver behind the promotion of a supranational reserve paper currency had one goal in mind: allowing the US to “remain masters of gold.”

Specifically, this is among the top secret paragraphs said on a cold night in March 1968:

If we want to have a chance to remain the masters of gold an international agreement on the rules of the game as outlined above seems to be a matter of urgency. We would fool ourselves in thinking that we have time enough to wait and see how the S.D.R.’s will develop. In fact, the challenge really seems to be to achieve by international agreement within a very short period of time what otherwise could only have been the outcome of a gradual development of many years.

“The real hopeless victims of mental illness are to be found among those who appear to be most normal. Many of them are normal because they are so well adjusted to our mode of existence, because their human voice has been silenced so early in their lives that they do not even struggle or suffer or develop symptoms as the neurotic does. They are normal not in what may be called the absolute sense of the word; they are normal only in relation to a profoundly abnormal society. Their perfect adjustment to that abnormal society is a measure of their mental sickness. These millions of abnormally normal people, living without fuss in a society to which, if they were fully human beings, they ought not to be adjusted.”
– Aldous Huxley – Brave New World Revisited

“There will be, in the next generation or so, a pharmacological method of making people love their servitude, and producing dictatorship without tears, so to speak, producing a kind of painless concentration camp for entire societies, so that people will in fact have their liberties taken away from them, but will rather enjoy it, because they will be distracted from any desire to rebel by propaganda or brainwashing, or brainwashing enhanced by pharmacological methods. And this seems to be the final revolution.”
–Aldous Huxley, 1961