“The real hopeless victims of mental illness are to be found among those who appear to be most normal. Many of them are normal because they are so well adjusted to our mode of existence, because their human voice has been silenced so early in their lives that they do not even struggle or suffer or develop symptoms as the neurotic does. They are normal not in what may be called the absolute sense of the word; they are normal only in relation to a profoundly abnormal society. Their perfect adjustment to that abnormal society is a measure of their mental sickness. These millions of abnormally normal people, living without fuss in a society to which, if they were fully human beings, they ought not to be adjusted.”
– Aldous Huxley – Brave New World Revisited

“There will be, in the next generation or so, a pharmacological method of making people love their servitude, and producing dictatorship without tears, so to speak, producing a kind of painless concentration camp for entire societies, so that people will in fact have their liberties taken away from them, but will rather enjoy it, because they will be distracted from any desire to rebel by propaganda or brainwashing, or brainwashing enhanced by pharmacological methods. And this seems to be the final revolution.”
–Aldous Huxley, 1961

Please read the comment from Marilyn Gjerdrum at the end of the following article.

The number of people on SSDI now exceeds the entire population of Greece. The aging of the population has nothing to do with the increase. In 1968 there were 51 workers for every person on disability. Today there are 13 workers for every person on disablity. Even the most pollyanna would agree that medical advancements since 1968 have been significant. These medical advancements would argue for less people being on disability and unable to work. Workplace safety measures have been increased exponentially since 1968, so that also argues for less disabled workers. The good old ADA law forced all workplaces to become disabled friendly. That argues for less people on disability. The country has transitioned from a manufacturing society to a service society. Workers don’t work on dangerous assembly lines anymore. Robots do the dangerous stuff. This should have dramatically reduced worker injuries and disabilities.

Everything I’ve pointed out is true. The tremendous increase in people on SSDI is nothing but a gigantic fraud, perpetuated by the Federal government and slimy lawyers. The government broadened the scope of disabilities to include stress, depression, and non-diagnosable things like aches and pains. I have stress, depression and pains too, but I get up at 5:15 every morning and go to work. The SSDI program is a joke. More than half the people on SSDI are lazy good for nothing leeches. They are sucking you and I dry while sitting around eating cheetos, watching Judge Judy on their government subsidized cable TV, and texting with other lazy fucks on their iPhones.

And don’t forget, you get the added benefit of Medicare coverage after only two years of SSDI stress. 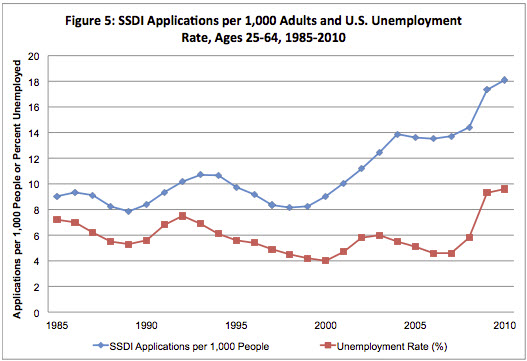 The total number of people in the United States now receiving federal disability benefits hit a record 10,962,532 million in April, which exceeds the 10,815,197 people who live in the nation of Greece.