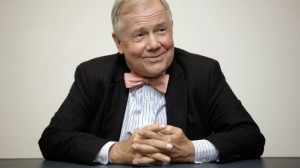 With Bernanke’s term due to expire in January, Jim Rogers warns Mineweb that the Fed-head will be remembered as “the guy who set the stage for the demise of the Central Bank in America. We’ve had three central banks in America. The first two disappeared. This one’s going to disappear too in the next decade.” With precious metals, bonds, and stock markets obsessing over Fed actions, Rogers says, in the next 10 years or so, “People will realise that these guys have led us down a terrible path,” and collapse is “not a possibility,” he adds, “it’s a probability.”

“100 years ago you could not have named the head of most central banks in the world,” Rogers told Mineweb. “Now they’re all rockstars.” Gold and equity markets have increasingly been locked in Fed-watch mode in 2013, obsessing over when or whether chairman Ben Bernanke would taper the bank’s vast bond buying scheme.

Rogers however, an ardent free-marketeer, says the market’s narrow focus on the Fed reflects the bank’s rising and now extreme interference in global markets, propelling the likes of Bernanke in the US and Mario Draghi in Europe to near household name status.

“Everybody knows them,” he says, “but that’s only a phenomenon of the last 20 years, when central banks have been pumping money into the markets and everybody’s singing hallelujah.”

With Bernanke’s term due to expire in January, Rogers says he will be remembered as “the guy who set the stage for the demise of the Central Bank in America. We’ve had three central banks in America. The first two disappeared. This one’s going to disappear too in the next decade.”

“It’s not a possibility,” he adds, “it’s a probability. People will realise that these guys have led us down a terrible path. The Fed balance sheet has increased by 500 per cent in the last 5 years and a lot of it’s garbage.”

Unlike the wider market, Rogers does not set great store by the Fed’s decision shortly before Christmas to taper its bond buying measures from $85bn per month to $75bn. The announcement put pressure on gold and drove US equities to a new all-time high, in what Rogers views as a relief rally.

“The US went up because people said, ‘Now it’s done, we don’t have to worry anymore.’ But somewhere along the line, markets are going to start suffering. They’ll taper until the markets start hurting and then they’ll panic and loosen up again. They’ve got themselves in a terrible box.”

“It’ll turn into a bubble or a very inflated situation, but eventually the markets will say, we’re not going to take your garbage anymore, whether it’s treasury bonds or currency.” Inflation, Rogers says, has only been kept in check in the US by the country’s shale gas discovery, putting a “dampener” on energy prices.

Whist Rogers views mass money printing as untenable, in the short term, he expects equities to turn parabolic, rather than collapse.

Rogers prefers gold over gold mining shares and divisible coins over bullion, but says “there’s nothing in precious metals that I’m tempted to buy at the moment.” Indian import tariffs he views as the single biggest drag on the gold market currently.

“They’ve got a huge balance of trade deficit and the three largest parts are oil, gold and cooking oil. They cannot do anything about oil or cooking oil, so they’re attacking gold, blaming their problems on gold. Gold has not caused their problems, gold is a symptom of their problems, but politicians are pretty simple-minded people and they look for the easy answer.”

For early 2014, Rogers is therefore long inflatable equities and neutral on gold, but longer term, he expects to short junk and government bonds and is ultra bullish on gold. “Gold will become one of the only refuges around,” he says.