China has mobilized troops to help with flood relief and raised its disaster alert to the highest level after days of downpours forced the evacuation of more than half a million people in central and southern provinces.

The official China Daily said more than 555,000 people had been evacuated in seven provinces and a municipality after rains in recently drought-stricken areas caused floods and mudslides in the Yangtze River basin. 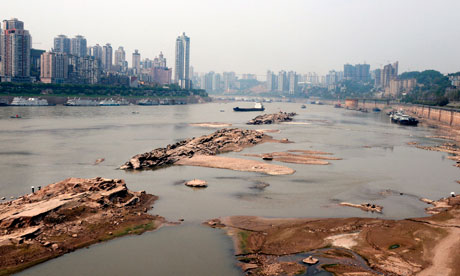 The dried up Yangtze river in southwest China’s Chongqing municipality. The severe drought has forced a massive release of water from China’s Three Gorges reservoir for irrigation and drinking water. Photograph: STR/AFP/Getty

The Yangtze – Asia’s biggest river – is experiencing its worst drought in 50 years, forcing an unprecedented release of water from the Three Gorges reservoir. The drought is damaging crops, threatening wildlife and raising doubts about the viability of China’s massive water diversion ambitions.

Between now and 10 June the dam will release 5bn cubic metres of water – equivalent to the volume of Lake Windermere in Britain every day – as engineers sacrifice hydroelectric generation for irrigation, drinking supplies and ecosystem support.

The drastic measure comes amid warnings of power shortages and highlights the severity of the dry spell in the Yangtze delta, which supports 400 million people and 40% of China’s economic activity.

From January to April, the worst hit province of Hubei has had 40% less rainfall than the average over the same period since 1961. Shanghai, Jiangsu and Hunan are also severely affected.

Regional authorities have declared more than 1,300 lakes “dead”, which means they are out of use for irrigation and drinking supply. Shortages affect 4.4 million people and 3.2 million farm animals, according to the Office of State Flood Control and Drought Relief Headquarters. 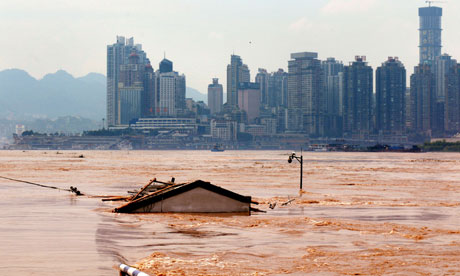 Flooding in China this year has killed 701 people, left 347 missing and caused billions of pounds in damage, a senior Chinese official has said.

Three-quarters of China’s provinces have been hit by flooding and 25 rivers have seen record high water levels, causing the worst death toll in a decade, Liu Ning, general secretary of the government’s flood prevention agency, told a news conference.

With the flood season far from over, this year is shaping up to be one of the most devastating since 1998, which was the worst in 50 years.