Ten people were arrested on federal criminal charges, one person was arrested on state charges and 86 immigrants were detained for being in the country illegally.

– American Citizen Held By Immigration Enforcement For Over 3 Years Without Lawyer:

“I am an American citizen,” Davino Watson pleaded with ICE (Immigration and Customs Enforcement) agents, judges, and jailers. But to no avail; he was held in detention for over 3 years as a deportable illegal immigrant.

What did his court appointed lawyer have to say ? Nothing, because he was never assigned one. After all, illegal immigrants are not afforded the same rights of the accused and due process guaranteed to American citizens. The only problem: Davino Watson was in fact an American citizen.

Eventually, Watson was released and managed to get a meager court settlement of $82,500. But he would never see the money. Two weeks ago, an appeals court ruled that Watson is not entitled to the compensation. Turns out the statute of limitations expired–while he was still in ICE custody!

“Enforcement policies that include stalking courthouses and arresting undocumented immigrants, the vast majority of whom pose no risk to public safety, are neither safe nor fair.  They not only compromise our core value of fairness but they undermine the judiciary’s ability to provide equal access to justice.”

– Trump On A Roll, Fires Director Of Immigration And Customs Enforcement:

Having said the infamous words “you’re fired” once already this evening, when President Trump relieved acting AG Sally Yates of her duties just after 9pm Eastern, and perhaps realizing just how much he missed the sound, moments ago Trump also relieved acting Immigration and Customs Enforcement (ICE) Director Daniel Ragsdale, who was replaced with Thomas Homan, who previously led ICE’s “efforts to identify, arrest, detain, and remove illegal aliens, including those who present a danger to national security or are a risk to public safety, as well as those who enter the United States illegally or otherwise undermine the integrity of our immigration laws and our border control efforts.”

There was no immediate reason given for Ragsdale’s dismissal.

The full statement from DHS Secretary Kelly announcing Homan taking over as ICE Director is below.

Read moreTrump On A Roll, Fires Director Of Immigration And Customs Enforcement

Newly discovered emails from the Department of Homeland Security (DHS), reveal efforts of the federal government to track American citizens who visit gun shows across the country.  The discovery came via a Freedom of Information Act (FOIA) request from the Wall Street Journal that revealed internal emails from an Immigration and Customs Enforcement (ICE) agent requesting the support of local California police officers to “deploy license plate readers” at a 2010 gun show in Del Mar, California.

In an email titled “Request for Assistance,” an ICE investigator wrote, “We would like to see if you can support an outbound guns/ammo operation on (redacted) at the Crossroads (Del Mar) Gun Show. We would like to deploy license plate readers.” The email, whose sender and recipient are redacted, includes a large section of operational details that are also redacted.

4 Dec 2014 – Conditions worsened in the on-going ice storm in Lower Austria and Burgenland on Thursday.

Large areas of the eastern part of Austria have been brought to a standstill, with fire services calling in the military after finding ice-covered roads impassable in emergency vehicles.

Roads, trees and houses are covered in at least a centimeter of solid ice, leaving thousands of homes cut off and without power.

Homeland Security Secretary Jeh Johnson on Wednesday ordered the cancellation of a plan by the Immigration and Customs Enforcement agency to develop a national license-plate tracking system after privacy advocates raised concern about the initiative.

The order came just days after ICE solicited proposals from companies to compile a database of license-plate information from commercial and law enforcement tag readers. Officials said the database was intended to help apprehend fugitive illegal immigrants, but the plan raised concerns that the movements of ordinary citizens under no criminal suspicion could be scrutinized.

In yet another huge blow to the rhetoric and narrative of the Obama administration and its desire to disarm the American public, a DHS bid has been uncovered (see documents below) showing that the Department of Homeland Security recently put out an offer to purchase 7,000 full-auto “assault weapons” to be used domestically, inside the USA.

Keep in mind that President Obama is on the record saying, “AK-47s belong in the hands of soldiers, not in the hands of criminals; that they belong on the battlefield of war, not on the streets of our cities.”

But it seems he really means they don’t belong on the streets of our cities unless they are in the hands of homeland security enforcers, in which case they can be FULL-AUTO assault weapons.

The DHS bid for 7,000 full-auto assault weapons is found by clicking here. The original credit for discovering this goes, to my best knowledge, to Awr Hawkins at Breitbart.com.

In the hands of the government, they’re called “Personal Defense Weapons”

The juiciest part of this bid is the use of the phrase “Personal Defense Weapons” to describe the full-auto AR-15s being purchased by DHS.

Apparently, when YOU hold an AR-15, it’s an “assault rifle.” But magically, if you hand that same rifle to an armed government homeland security enforcer, it instantly transforms itself into a “personal defense weapon.”

The request for bid actually says: 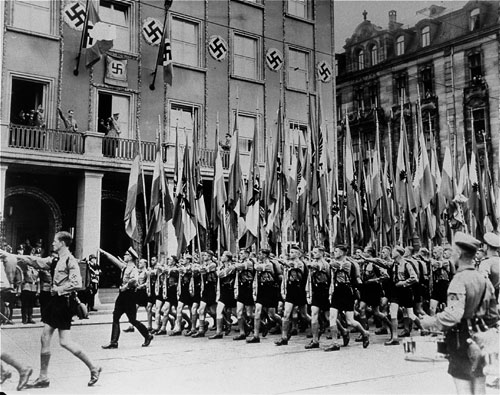 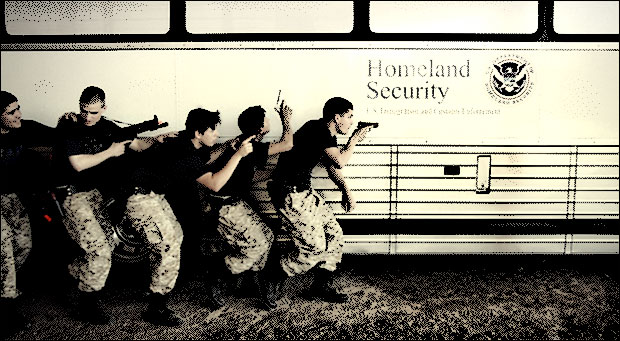 The federal government calls them FEMA Corps. But they conjure up memories of the Hitler Youth of 1930’s Germany. Regardless of their name, the Dept of Homeland Security has just graduated its first class of 231 Homeland Youth. Kids, aged 18-24 and recruited from the President’s AmeriCorp volunteers, they represent the first wave of DHS’s youth corps, designed specifically to create a full time, paid, standing army of FEMA Youth across the country.

On September 13, 2012, the Department of Homeland Security graduated its first class of FEMA Corps first-responders. While the idea of having a volunteer force of tens of thousands of volunteers scattered across the country to aid in times of natural disasters sounds great, the details and timing of this new government army is somewhat curious, if not disturbing.

The first problem one finds with this ‘new army’ is the fact that they are mere children. Yes, 18 is generally the legal age a person can sign a contract, join the military or be tried as an adult. But ask any parent – an 18, 20 or even a 24 year-old is still a naïve, readily-influenced kid.

The second problem with this announcement and program is its timing. Over the past two years, President Obama has signed a number of Executive Orders suspending all civil and Constitutional rights and turning over management of an America under Martial Law to FEMA. Also in that time, domestic federal agencies under DHS, including FEMA, have ordered billions of rounds of ammunition as well as the corresponding firearms. Admittedly, these new weapons and ammunition aren’t to be used in some far-off war or to fight forest fires in California, but right here on the streets of America.