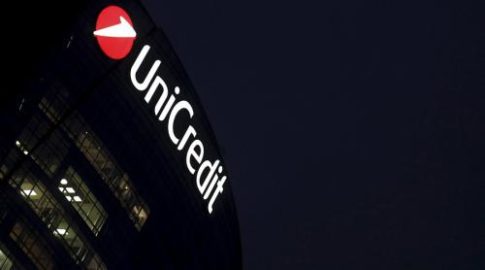 While the head of the ECB and his assorted kitchen sinks scramble to explain how Diesel-BOOM was horribly misunderstood when saying that depositor impairment may and will be the template for future European bank “resolution” (as should have been the case from Day 1), the CEO of Italy’s largest bank appears to have missed the memo. As Bloomberg reports, according to the chief executive Federico Ghizzoni, “uninsured deposits could be used in future bank failures provided global rulemakers agree on a common approach.” Or failing that, because if Cyprus taught us anything is that Europe will never have a common approach on anything, just use deposits as impairable liabilities, period, once the day of reckoning for Non-Performing Loans comes and these are forced to be remarked to reality, just as happened in Cyprus. One can only hope that uninsured deposits do not represent a substantial portion of the bank’s balance sheet because the CEO basically just told them they are next if when risk comes back to the Eurozone with a vengeance. Especially since as Mario Draghi was so helpful in pointing out, “there is no Plan B.”

Cutting large deposits in failing banks, along with other liabilities such as bonds, to offset losses is acceptable as long as small savers’ funds remain protected, Ghizzoni told reporters in Vienna late yesterday. The European Union has to introduce identical rules in all of its member states and ideally those rules would be coordinated globally, he said.

In fact, to the Italian, deposit impairment is perfectly ok as long as “everyone does it” – in other words, if it does become the template the Dutch finance minister already said it is, then all is well.

Including deposits “is acceptable if it becomes a European solution,” said Ghizzoni, 57. “What we cannot accept is differentiation country by country inside the same area. I would strongly suggest to make this decision not only within Europe but within the Basel Committee, where all countries are represented. Otherwise we would open the market for arbitrage.” 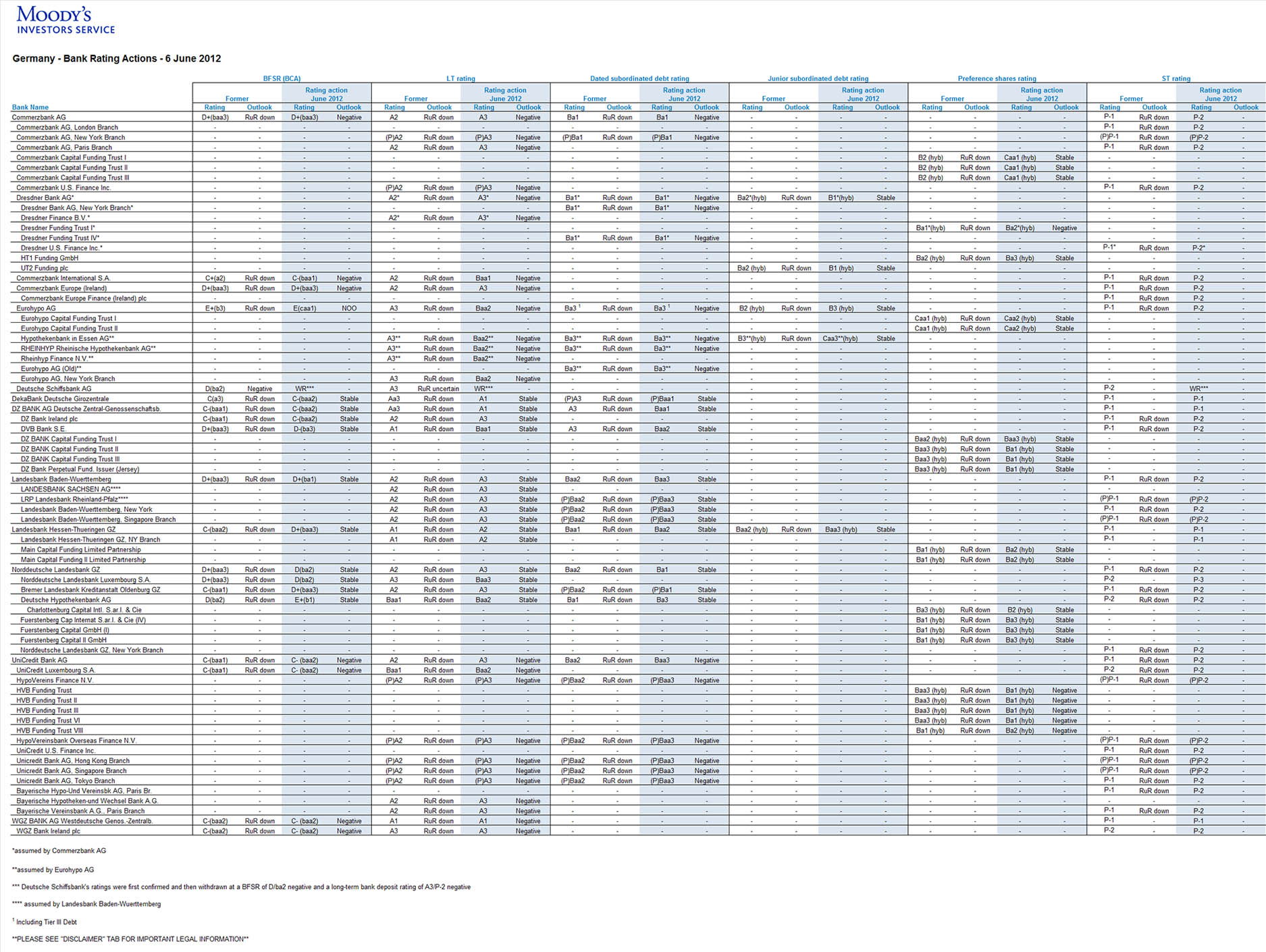 Assets worth more than €1bn belonging to the late Muammar Gaddafi, his son, and his intelligence chief were seized in Italy in raids by its revenue guard made at the request of the international criminal court in The Hague.

They included holdings in some of Italy’s biggest corporations, a 1.5% stake in the Serie A side Juventus and a Harley-Davidson motorbike.

Also seized from the Libyan leader was a 150-hectare estate on the Mediterranean island of Pantelleria, a destination for illegal migrants and refugees attempting to enter Europe by boat from Libya. The seizures were ordered by the Rome appeals court at the request of the international criminal court in The Hague. The ICC launched a hunt for property belonging to Gaddafi and his associates last June when it issued warrants for their arrest on charges of crimes against humanity.

Financial assets owned by the late Libyan leader had earlier been frozen in the European Union and elsewhere following two UN resolutions in February and March, 2011. Gaddafi was killed by insurgents last October after failing to put down a popular uprising backed by most western powers.

The most valuable single item seized was a 1.26% interest in Italy’s biggest bank, Unicredit, worth more than €600m (£502m). Other significant shareholdings included stakes in the oil and gas giant, ENI, the defence firm Finmeccanica and two companies in the Fiat motor group.

When we presented the news about yesterday’s UniCredit rights offering we said that “a UniCredit €7.5 billion new stock issue pricing at a whopping 43% discount to market price shows that fair value of actual demand for European banks is about half of where the artificially propped up price is.” Sure enough the market appears to have taken testing this assumption to task, and in the past two days 30% of the entire market cap of UniCredit has been destroyed. And what makes this otherwise sad development for many people, who had previously been fooled by various governments in believing that asset values are fair and could thus rise when in reality everything has been distorted and manipulated beyond comprehension, simply hilarious is that not even a month ago UniCredit did a one for ten reverse stock split. At this rate another reverse stock split is imminent before next week is over. Which is to be expected: after all prices are determined on the margin and are a function of systemic liquidity, which in Europe no longer exists in free form. US readers be advised: discoveries such as this one are coming to the US very soon. 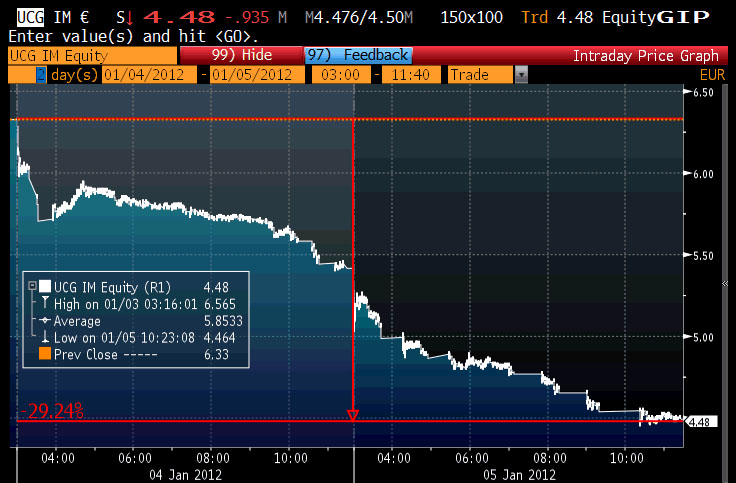 So, according to this, Mediobanca is the largest shareholder of UniCredit.  I guess it could be custodial, but does explain why they are part of the underwriting group that backstopped the deal. 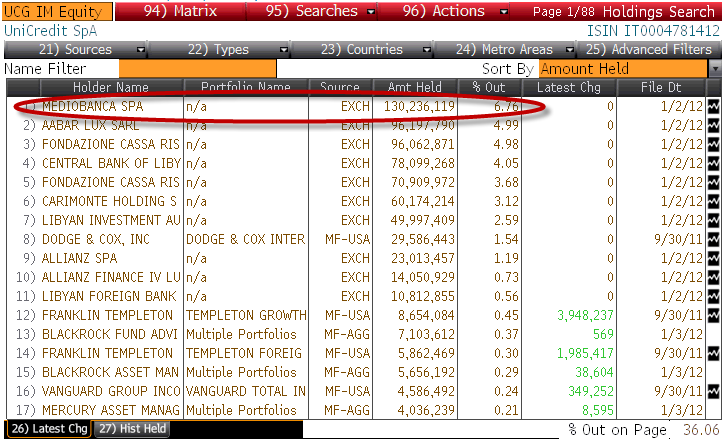 If you combine the Central Bank of Libya, Libyan Investment Authority, and Libyan Foreign Bank holdings, then they are actually bigger than Mediobanca. 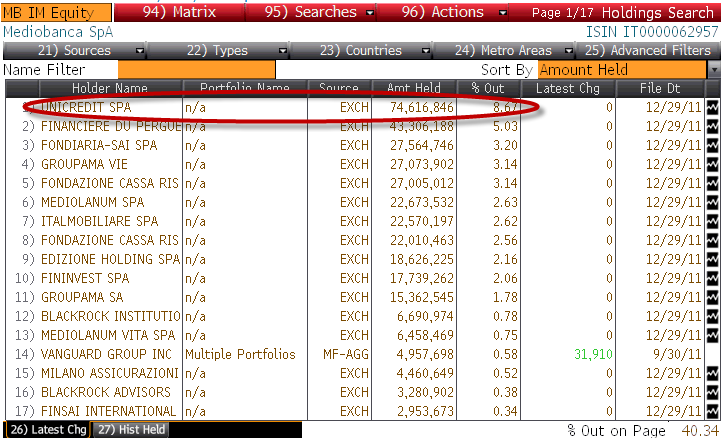 At the risk of making a mountain out of a mole hill, Unicredit is the largest holder of Mediobanca (8.7% according to Bloomberg)

Remember when CDO’s all bought each other’s BBB and BB tranches, because no one else would?

Much to the chagrin of the US Department of Mass Disinformation, the market has completely ignored the ridiculous ADP data, and has focused squarely on what is happening in Milan where the serial halting of bank trading has resumed. Following the 4th unhalt of UniCredit, its stock is now down 15% on the day as it scrambles to catch up to the fair value represented yesterday courtesy of the rights offering to be about 43% below the market price. As a result while the robotic decoupling in the US continues, as somehow America is supposed to be able to import and export from and to itself and completely ignore that it has about $3 trillion in European bank exposure, the EURUSD has just dipped to below 1.28 for the first time in over a year. Lastly, not helping things is the already noted implosion of refiner Petroplus which just announced that access to all of its credit lines has been suspended, sending the stock down 20%. Looks like it will be a long, cold winter for Europe even as the US decouples to a Dow 36,000 mushroom cloud. 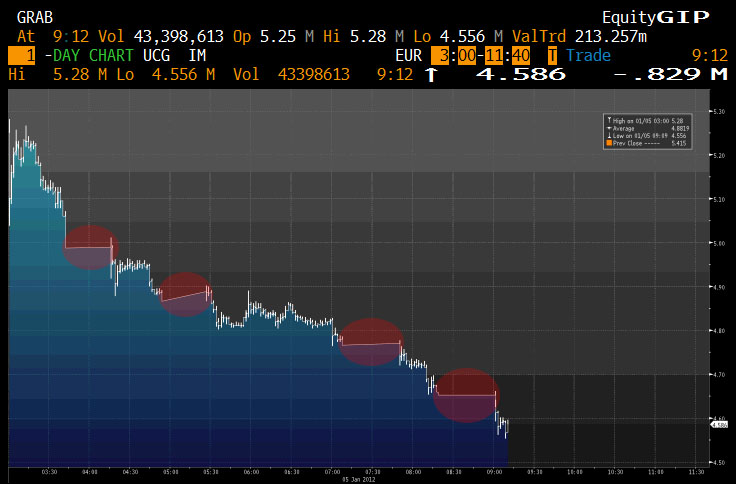 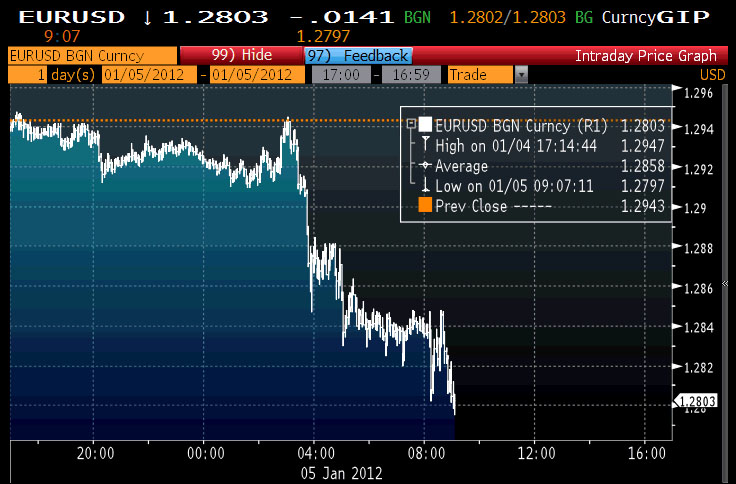