Update: the FT writes that the Italian govt set to take a stake between 50% and 70% in Monte dei Paschi, up from the current 4% stake, as part of the government’s third bailout in as many years. As the FT adds, “the government rescue, which had long been resisted in Rome, is designed to draw a line under the slow-burn crisis in Italian banking that has alarmed investors and become the main source of concern for European financial regulators.”

It remains to be seen if Germany, long a critic of state bailouts, will be as agreeable.

Meanwhile, Pier Carlo Padoan, the Italin finmin, insisted that apart from a few “critical” situations, Italy’s banking system was “solid and healthy”. He vowed to “minimise, if not erase” any impact of the public intervention on the savings of ordinary citizens.

In early European trading, shares of Italy’s Monte Paschi halted after crashing 17%, dropping to fresh all time lows, after the bank warned its liquidity could run out far sooner than expected. But then, moments ago, its shares soared, recovering all losses when Italy’s upper house of parliament approved a government request to borrow up to €20 billion to underwrite the country’s troubled banks.

Bankers are running out of private-sector solutions for Monte dei Paschi di Siena and have told the Italian lender to prepare for a state bailout this weekend after prime minister Matteo Renzi was felled by a referendum defeat.

– An Inside Look At Two “Unrelated” Banker Suicides Reveals A Fascinating Rabbit Hole:

It has been nearly four years since one of the most infamous, and still largely unexplained, banker “suicides” took place, the first in a series of many: we are talking about the death of the director of communications at Monte dei Paschi di Siena, David Rossi, who allegedly jumped to his death on March 6, 2013.

Since this event has largely faded away from the public consciousness here is a quick recap: David Rossi, who was the head of communications for Monte dei Paschi di Siena bank, which was founded in 1472 and which is currently seeking to finalize its third bailout since the financial crisis, died after falling – or being pushed – from a third floor window of the bank’s headquarters in a 14th century palazzo in the Tuscan city of Siena. 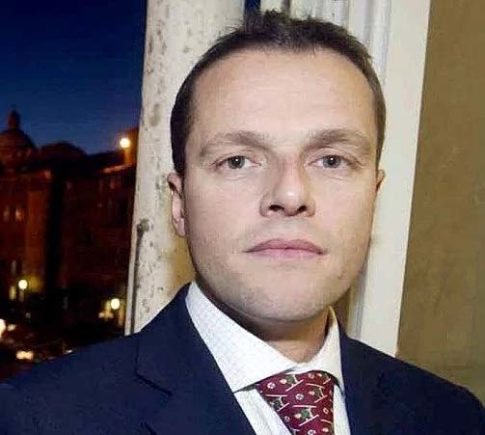 His death in March 2013 came at a time when the bank was pushed close to the brink of collapse over a scandal involving the loss of hundreds of millions of euros through risky investments.

While a quickly cobbled together post-mortem found that Rossi, 51, had killed himself, his family strongly suspected that he was murdered because he knew too much about the bank’s shady financial deals. As a result, earlier this year, prosecutors in Siena, where the bank is based, ordered his body to be exhumed and for the trajectory of his fall to be simulated, in an attempt to discover exactly how he died.

Nearly four years after it was first revealed that Deutsche Bank had engaged in various shady deals at the height of the financial crisis designed to mask Monte Paschi’s financial woes, on October 1 Italy finally charged the German lender and 6 of its current and former managers, including the infamous Michele Faissola (much more on him soon), Michele Foresti and Ivor Dunbar, for colluding to falsify the accounts of Italy’s third-biggest bank, Monte Paschi, and manipulate the market. Two former executives at Nomura Holdings Inc. and five at Banca Monte dei Paschi di Siena were also charged.

As Bloomberg reported, prosecutors have been reconstructing how Monte Paschi’s former managers misrepresented the lender’s finances in the years through the two deals signed with Deutsche Bank in 2008 and Nomura in 2009.  The investigation revealed Monte Paschi arranged the transactions to hide billions in losses that led to false accounting between 2008 and 2012, according to a prosecutors’ statement released Jan. 14, when they completed the investigation.

Moments ago, the European Banking Authority published the 2016 bank stress test results, whose purpose – as every other year –  is to inspire confidence in Europe’s struggling banks; it differs from a market-based assessment of bank stress – that particular “test” can be seen by observing the stock prices of such giant banks as Deutsche Bank and Credit Suisse, both of which recently hit all time lows. As previewed yesterday, Italy’s 3rd largest, and most insolvent bank, Banca Monte di Siena was the worst performer in European regulators’ stress tests, and the only lender to have its capital wiped out in the exam.
…

Italy is scrambling to secure a privately-backed bailout of Monte dei Paschi di Siena, the most exposed of the country’s troubled lenders, including a plan to raise €5bn of fresh capital so as to avert nationalisation, the FT reports. The bank needs to obtain some €5 bilion in capital ahead of Friday’s stress test, or else a dire “contagion” scenario could unfold that could impair not only all Italian banks, but promptly spread first to France and then to Germany…

The headline-maker in Italy is Monte Paschi which has seen CDS soar post the regulatory ban on short-selling stock. At over 1700bps, this implies a 67% chance of default… crushing the hopes and dreams of 100s of thousands of mommas and poppas and Renzi’s dream of reelection… 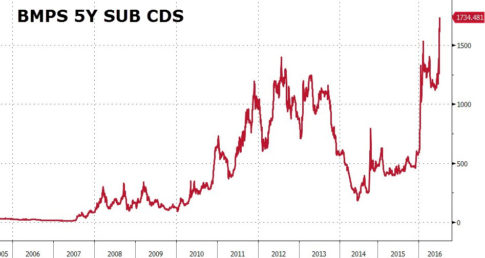 As Bloomberg adds, Banca Monte dei Paschi di Siena’s subordinated bonds fell to a five-month low amid reports that Italy and the European Commission are in deadlock over how to boost the country’s broken banking system.

The ongoing debacle of Italy’s Banca Monte dei Paschi (BMPS) took a turn for the worst today. The bank’s largest shareholders (MPS Foundation) approved (read – forced through) a delay in a EUR 3 billion capital raise, which the bank needs to avoid nationalization, until May. The delay (which will cost the bank EUR 120 million in interest) allows MPS more time to liquidate their 33.5% holding before their stake is massively diluted. Management is ‘considering’ resignation and is “very annoyed,” but the city Mayor is going Nationalist with his delay-supporting comments that “we cannot let the third biggest bank in this country fall prey to foreign interests.” So Europe is recovering but they can’t even raise a day’s worth of POMO to save the oldest bank in the world?

Read moreBailout Of World’s Oldest Bank In Jeopardy, Rests On Hope That ‘Ship Does Not Sink’