– “Pandora’s Box Is Open”: Why Japan May Have Started A ‘Silent Bank Run’:

As extensively discussed yesterday in the aftermath of the BOJ’s stunning decision to cut rates to negative for the first time in history (a decision which it appears was taken due to Davos peer pressure, a desire to prop up stock markets and to punish Yen longs, and an inability to further boost QE), there will be consequences – some good, mostly bad.

As Goldman’s Naohiko Baba previously explained, NIRP in Japan will not actually boost the economy: “we do have concerns about the policy transmission channel. Policy Board Member Koji Ishida, who voted against the new measures, said that “a further decline in JGB yields would not have significantly positive effects on economy activity.” We concur with this sentiment, particularly for capex. The key determinants of capex in Japan are the expected growth rate and uncertainty about the future as seen by corporate management according to our analysis, while the impact of real long-term rates has weakened markedly in recent years.”

What the BOJ’s NIRP will do, is result in a one-time spike in risk assets, something global stock and bond markets have already experienced, and a brief decline in the Yen, one which traders can’t wait to fade as Citi FX’s Brent Donnelly explained yesterday.

NIRP will also have at most two other “positive” consequences, which according to Deutsche Bank include 1) reinforcing financial institutions’ decisions to grant new loans and invest in securities (if only in theory bnecause as explained further below in practice this may very well backfire); and 2) widening interest rate differentials to weaken JPY exchange rates, which in turn support companies’ JPY-based sales and profit, for whom a half of consolidated sales are from overseas.

That covers the positive. The NIRP negatives are far more troubling. The first one we already noted yesterday, when Goldman speculated that launching NIRP could mean that further QE is all tapped out:

… we believe the BOJ thinks that JGB purchases will have reached their technical limit in quantitative terms eventually, and it is highly likely it was a last-ditch measure to somehow maintain the current pace of purchases for some time. If not, we would have expected the BOJ not to introduce a negative interest rate this time either and to have opted instead to further increase JGB purchases.

Today, Deutsche Bank’s Japan analyst Mikihiro Matsuoka jumps on the bandwagon and adds that “we are worried about a possible opening of a Pandora’s Box by explicitly removing the lower bound of nominal interest rates.”

Here, according to Deutsche, are the most severe consequences of Japan opening the NIRP Pandora’s box :

It is that last bullet point which is most important because it leads us to the most disturbing topic of all for Japan – the risk that NIRP backfires and leads to another “China”, where the local citizens rush to park their assets offshore, resulting in a slow at first then rapidly accelerating capital outflow. This is how DB explains it:

if the negative interest rate continues for longer or goes deeper, commercial banks may have to set negative interest rates on deposits, which would expand not only the tax on commercial banks, but also on depositors (households and companies). This could lead to a ‘silent bank run’ via a shift of deposits to cash (banknotes), which in turn damages the sound banking system by enlarging the leakage of funds from the credit creation mechanism in the banking system.

That, and the capital outflow noted above. The good news is that Japan has a lot of physical banknotes to allow the NIRP bank run to continue for quite a while before collapsing the financial system. 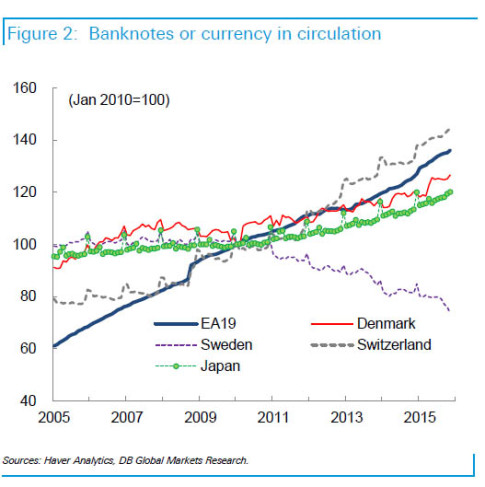 In short, to grasp the worst possible consequence of Japan’s panicked response to a rising Yen and plunging Nikkei look no further than China’s unprecedented capital control attempts to stem the monetary outflow. Could it be that in its eagerness to devalue the Yen, the BOJ – like the PBOC – will be fighting tooth and nail in a few months to prop it up?

And if that wasn’t cheerful enough, here is DB’s conclusion which confirms that just a month after the Fed made a policy mistake, it is Japan’s turn to follow in Yellen’s shoes:

We wonder whether removing the last breakwater of the lower bound at a zero interest rate could end up being an expensive choice in the long run. The factor which pushed the BoJ down this path is probably its view that causality runs from economic activity to wages and then to prices, which we do not agree with. Our view is that causality runs from economic activity to prices and then to wages, and we do not share the argument that inflation does not rise because wages have not risen.

We believe the additional room that the BoJ has to lower rates on bank reserves is smaller than in other countries that have already introduced a negative interest rate, because of the lower net interest margin of commercial banks in Japan. However, if the BoJ pursues this path, we could reach the point of the trade-off of possibly damaging the soundness of the banking system.

By then, however, a Davos peer-pressured Kuroda will be long gone, and the doomed attempt to keep the system together will be someone else’s problem. For now, all that matters is that stocks bounced… if only for a ahort time.