While everyone was focused on the impending European collapse, the latest soon to be refuted rumors of a quick fix from the Welt am Sonntag notwithstanding, the Bank of International Settlements reported a number that quietly slipped through the cracks of the broader media. Which is paradoxical because it is the biggest ever reported in the financial world: the number in question is $707,568,901,000,000 and represents the latest total amount of all notional Over The Counter (read unregulated) outstanding derivatives reported by the world’s financial institutions to the BIS for its semi-annual OTC derivatives report titled “OTC derivatives market activity in the first half of 2011.” Indicatively, global GDP is about $63 trillion if one can trust any numbers released by modern governments. Said otherwise, for the six month period ended June 30, 2011, the total number of outstanding derivatives surged past the previous all time high of $673 trillion from June 2008, and is now firmly in 7-handle territory: the synthetic credit bubble has now been blown to a new all time high. Another way of looking at the data is that one of the key contributors to global growth and prosperity in the past 10 years was an increase in total derivatives from just under $100 trillion to $708 trillion in exactly one decade. And soon we have to pay the mean reversion price.

What is probably just as disturbing is that in the first 6 months of 2011, the total outstanding notional of all derivatives rose from $601 trillion at December 31, 2010 to $708 trillion at June 30, 2011. A $107 trillion increase in notional in half a year. Needless to say this is the biggest increase in history. So why did the notional increase by such an incomprehensible amount? Simple: based on some widely accepted (and very much wrong) definitions of gross market value (not to be confused with gross notional), the value of outstanding derivatives actually declined in the first half of the year from $21.3 trillion to $19.5 trillion (a number still 33% greater than US GDP). Which means that in order to satisfy what likely threatened to become a self-feeding margin call as the (previously) $600 trillion derivatives market collapsed on itself, banks had to sell more, more, more derivatives in order to collect recurring and/or upfront premia and to pad their books with GAAP-endorsed delusions of future derivative based cash flows. Because derivatives in addition to a core source of trading desk P&L courtesy of wide bid/ask spreads (there is a reason banks want to keep them OTC and thus off standardization and margin-destroying exchanges) are also terrific annuities for the status quo. Just ask Buffett why he sold a multi-billion index put on the US stock market. The answer is simple – if he ever has to make good on it, it is too late.

Which brings us to the the chart showing total outstanding notional derivatives by 6 month period below. The shaded area is what that the BIS, the bank regulators, and the OCC urgently hope that the general public promptly forgets about and brushes under the carpet.

Try not to laugh. Or cry. Or gloss over, because when it comes to visualizing $708 trillion most really are incapable of doing so. 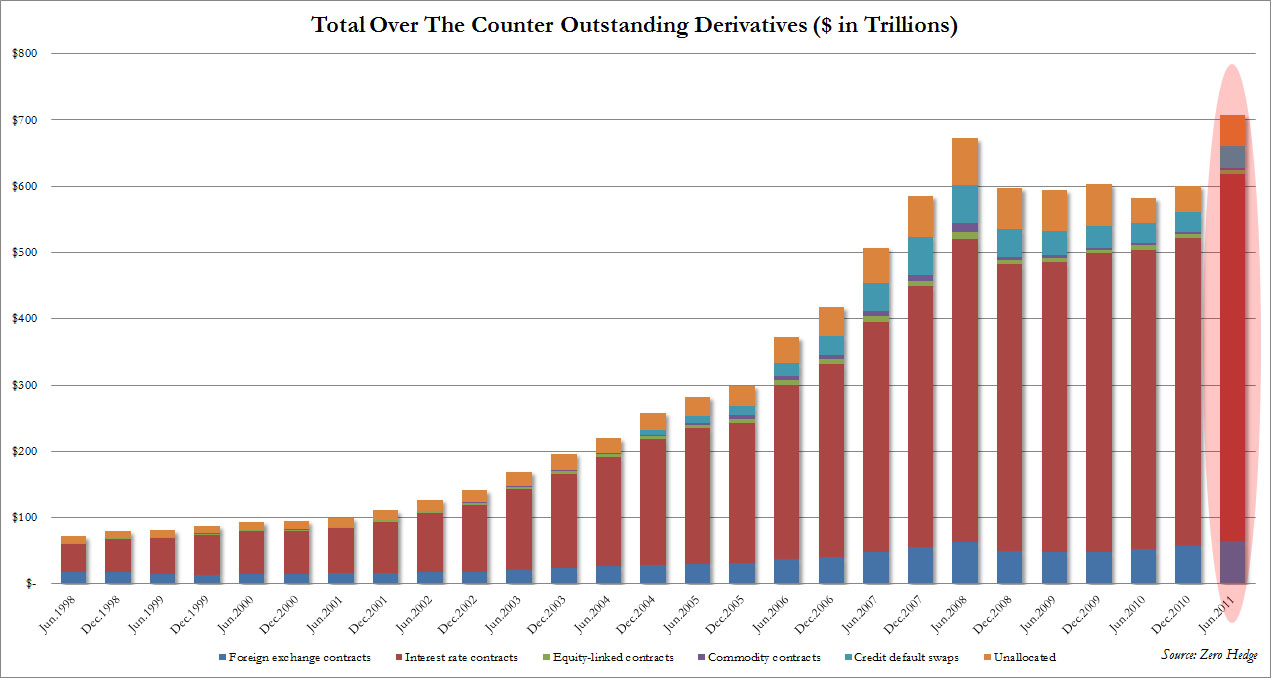 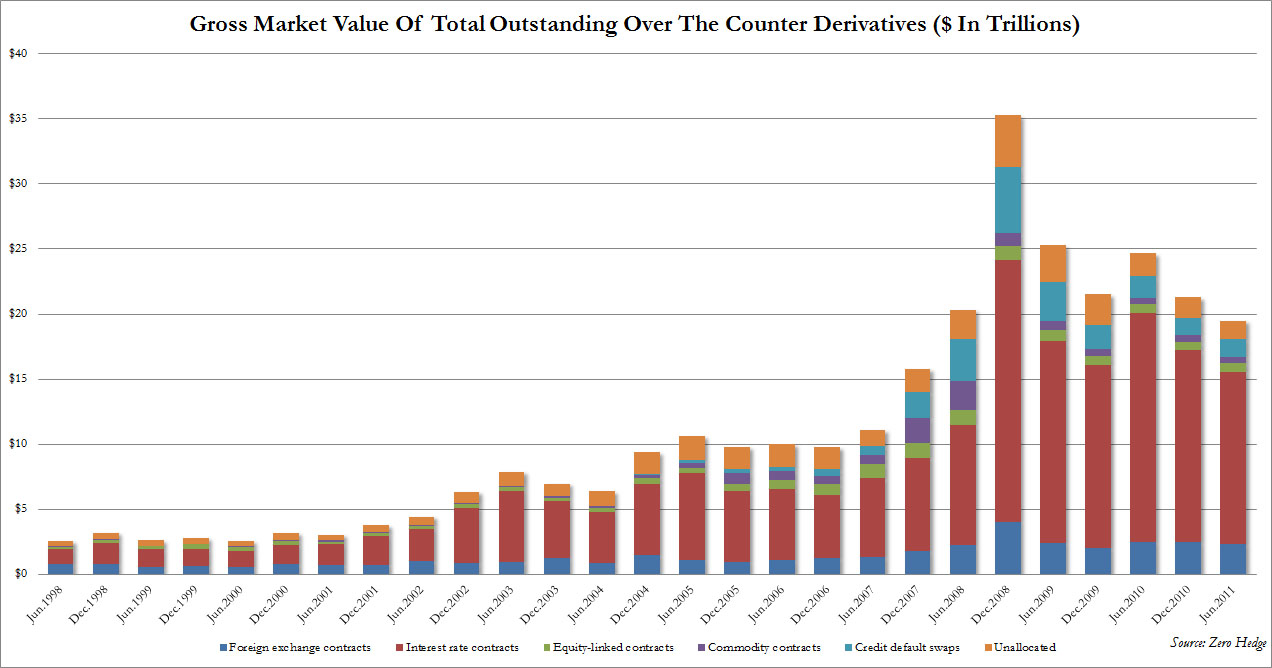 There is much more than can be said on this topic, and has to be said, because an increase of that magnitude is simply impossible to perceive without alarm bells going off everywhere, especially when one considers the pervasive deleveraging occurring at every sector but the government. All else equal, this move may well explain the massive surge in bank profitability in the first half of the year. It also means that with banks suffering massive losses, and rumors of bank runs and collateral calls, not to mention the aftermath of the MF Global insolvency, the world financial syndicate will have no choice but to increase gross notional even more, even as the market value continues to get ever lower, thus sparking the risk of the mother of all margin calls: a veritable credit fission reaction.

But no matter what: the important thing to remember is that “they are all hedged” – or so they say, a claim we made a completely mockery of a few weeks back. So ex-sarcasm, the now parabolic increase in derivatives means that when the bilateral netting chain is once again broken, and it will be (because AIG was not a one off event), there will simply be trillions more in derivatives that no longer generate a booked cash flow stream for the remaining counterparty, until at the very end, the whole inverted credit0money pyramid collapses in on itself.

And for those wondering what the distinction is between notional and

Nominal or notional amounts outstanding provide a measure of market size and a reference from which contractual payments are determined in derivatives markets. However, such amounts are generally not those truly at risk. The amounts at risk in derivatives contracts are a function of the price level and/or volatility of the financial reference index used in the determination of contract payments, the duration and liquidity of contracts, and the creditworthiness of counterparties. They are also a function of whether an exchange of notional principal takes place between counterparties. Gross market values provide a more accurate measure of the scale of financial risk transfer taking place in derivatives markets.

Well, no. It is logical that the BIS will advise everyone to ignore the bigger number and focus on the small one: just like everyone was told to ignore gross exposure and focus on net… until Jefferies had to dump all of its gross PIIGS exposure or stare bankruptcy in the face; so no – the correct thing to say is “gross market values provide a more accurate measure of the scale of financial risk transfer” if one assumes there is no counterparty risk. Because once the whole bilateral netting chain is broken, net becomes gross. And gross market value becomes total notional outstanding. And, to quote Hudson, it’s game over.

As for the largely irrelevant gross market value, which is only relevant in as much as it will be the catalyst which will precipitate margin calls on the underlying notionals, all $700+ trillion of them:

As stated above, gross market values supply information about the potential scale of market risk in derivatives transactions. Furthermore, gross market value at current market prices provides a measure of economic significance that is readily comparable across markets and products.

And here again, what they ignore to add is that the measure of economic significance is only relevant in as much as the world’s banks don’t begin a Lehman-MF Global tango of mutual margin call annihilation. In that case, no. They are not measures of anything except for what some banks plug into some models to spit out a favorable EPS treatment at the end of the quarter.

Expect to see gross market value declines persisting even as the now parabolic increase in total notional persists. At this rate we would not be surprised to see one quadrillion in OTC derivatives by the middle of next year.

And, once again for those confused, the fact that notional had to increase so epically as market value tumbled most likely means that the global derivative pyramid scheme (no pun intended) is almost over.