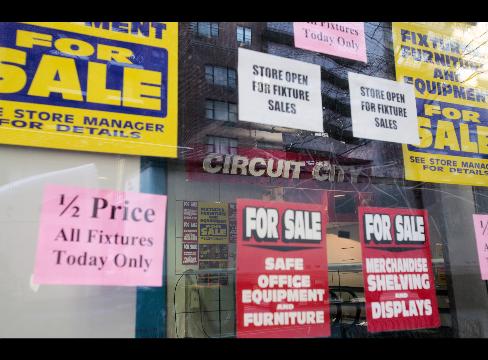 For sale signs sit on the window of a former Circuit City store in New York, on Dec. 29, 2008. Photographer: Jeremy Bales/Bloomberg News

Dec. 29 (Bloomberg) — U.S. retailers face a wave of store closings, bankruptcies and takeovers starting next month as holiday sales are shaping up to be the worst in 40 years.

Retailers may close 73,000 stores in the first half of 2009, according to the International Council of Shopping Centers. Talbots Inc. and Sears Holdings Corp. are among chains shuttering underperforming locations.

Sales at stores open at least a year probably dropped as much as 2 percent in November and December, the ICSC said last week, more than the previously projected 1 percent decline. That would be the largest drop since at least 1969, when the New York-based trade group started tracking data. Gap Inc. and Macy’s Inc. are among retailers that will report December results on Jan. 8.

Consumers spent at least 20 percent less on women’s clothing, electronics and jewelry during November and December, according to data from SpendingPulse.

Probably 50,000 stores could close without any effect on consumer choice, Gregory Segall, a managing partner at buyout firm Versa Capital Management Inc., said this month during a panel discussion held at Bloomberg LP’s New York offices. Only retailers with healthy balance sheets will survive the recession, according to Matthew Katz, a managing director at consulting firm AlixPartners LLP.

The ICSC predicts, using U.S. Bureau of Labor Statistics data, that 148,000 stores will shut down in 2008. That would be the largest number since 151,000 closings in 2001, during the last recession, according to ICSC Chief Economist Michael Niemira. The total number of retail establishments will decline by about 3 percent this year, also taking into account locations that were opened, he said. The U.S. had 1.11 million retail locations in 2002.

The U.S. economy shrank in the third quarter at a 0.5 percent annual pace, the worst since 2001, according to the Commerce Department. Economists surveyed by Bloomberg in the first week of December forecast the world’s largest economy will contract through the first half of 2009.

The Standard & Poor’s 500 Retailing Index has shed 34 percent this year, with only two of its 27 companies rising.

The index doesn’t include Wal-Mart, the world’s largest retailer, which fell 24 cents to $55.11 at 4:02 p.m. in New York Stock Exchange composite trading. Wal-Mart shares have gained 18 percent this year.

“If you’re going to be in retail right now, the discount space is where you want to be,” Patrick McKeever, a senior equity analyst at MKM Partners LLC, said today in a Bloomberg Television interview.

Discounts of 70 percent or more by Macy’s, AnnTaylor Stores Inc. and other retailers failed to prevent a spending drop of as much as 4 percent during the final two months of the year, according to data from SpendingPulse. Retailers’ pricing models are being challenged by consumers, according to Richard Hastings, consumer strategist at Global Hunter Securities LLC of Newport Beach, California.

“The whole pricing system is becoming an old-fashioned bazaar,” Hastings said today in a telephone interview. “They’re going into the stores and they’re looking at the stuff and they’re saying ‘You know what? I know that that price is way too high,’ and they have figured out that the signage doesn’t mean that much.”

Retail bankruptcies may help the industry in the long run, according to Flickinger.

“We’ll be going from a Dickens-esque worst of times this December to the best of times in future Decembers because we’ll rationalize out all the redundant retailers and retail space in shopping centers,” Flickinger said.

To contact the reporter on this story: Heather Burke in New York at hburke2@bloomberg.net.

1 thought on “Retailers may close 73,000 stores; Wave of store closings, bankruptcies and takeovers”