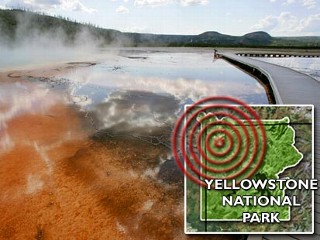 The strongest of dozens of tremors Monday was a magnitude 3.3 quake shortly after noon. All the quakes were centered beneath the northwest end of Yellowstone Lake.

A park ranger based at the north end of the lake reported feeling nine quakes over a 24-hour period over the weekend, according to park spokeswoman Stacy Vallie. No damage was reported.

“There doesn’t seem to be anything to be alarmed about,” Vallie said.

Smith said it’s difficult to say what might be causing the tremors. He pointed out that Yellowstone is the caldera of a volcano that last erupted 70,000 years ago.

He said Yellowstone remains very geologically active – and its famous geysers and hot springs are a reminder that a pool of magma still exists five to 10 miles underground.

“That’s just the surface manifestation of the enormous amount of heat that’s being released through the system,” he said.

Yellowstone has had significant earthquakes as well as minor ones in recent decades. In 1959, a magnitude 7.5 quake near Hebgen Lake just west of the park triggered a landslide that killed 28 people.