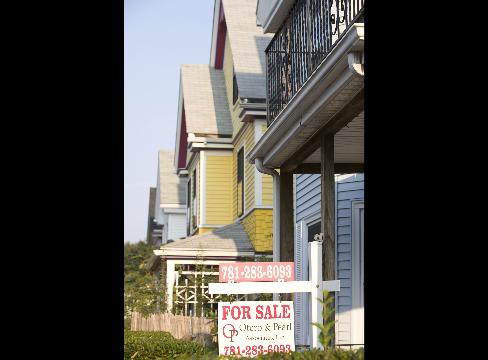 A for sale sign stands outside a home in Boston, on Sept. 5, 2008. Photographer: Michael Fein/Bloomberg News

The S&P/Case-Shiller index declined 18 percent in the 12 months to October, more than forecast, after dropping 17.4 percent in the year through September. The gauge has fallen every month since January 2007. Year-over-year records began in 2001.

The financial market meltdown that’s reverberated around the globe has prompted banks to curb lending, signaling the housing slump will persist for a fourth year in 2009. Falling property values have eroded household wealth, causing consumers to pare spending and deepening what is projected to be the longest recession in the postwar period.

Economists forecast the 20-city index would fall 17.9 percent from a year earlier, according to the median of 21 estimates in a Bloomberg News survey. Projections ranged from declines of 17 percent to 18.4 percent.

Compared with a year earlier, all areas in the 20-city survey showed a decrease in prices in October, led by a 33 percent drop in Phoenix, a 32 percent decline in Las Vegas and a 31 percent drop in San Francisco.

Dallas posted the smallest 12-month decline, at 3 percent, followed by a 4.4 percent drop for Charlotte and a 5.2 percent fall in Denver. New York City posted a 7.5 percent drop.

“The bear market continues,” David Blitzer, chairman of the index committee at S&P, said in a statement. The declines in Atlanta, Seattle and Portland surpassed 10 percent for the first time, he said.

The 20-city index is down 23 percent from its 2006 peak. Fourteen of the 20 metropolitan areas showed record declines in the year ended in October.

Home prices decreased 2.2 percent in October from the prior month after declining 1.8 percent in September, the report showed. The figures aren’t adjusted for seasonal effects so economists prefer to focus on year-over-year changes instead of month-to-month. Six cities, including Atlanta, Charlotte, Detroit, Minneapolis, Tampa and Washington, had the largest one- month drop on record.

Other housing reports this month have shown property values are deteriorating even faster as foreclosures climb. Home resales, which account for about 90 percent of the market, dropped in November and median-home prices fell 13 percent from a year earlier, the most since records began in 1968, the National Association of Realtors said last week. Foreclosures and so- called short sales, or purchases at less than the value of the outstanding mortgage, accounted for 45 percent of last month’s home purchases, the agents’ group also said.

Case, the co-founder of the pricing index, said today the high concentration of foreclosure sales in Florida, California, Nevada and Arizona led the drop in the overall price index.

“Auction sales are a big deal and they are concentrated, 54 percent, in four states,” said Case in an interview with Bloomberg Television from Wellesley College, in Wellesley, Massachusetts. “They are down a lot. They are driving the aggregate index down.”

The share of mortgages delinquent by 30 days or more and those already in foreclosure rose to all-time highs in the third quarter, the Mortgage Bankers Association said Dec. 5.

Declines in home construction have subtracted from economic growth since the first quarter of 2006. Weak housing construction is likely to remain a drag on the economy until sales and prices improve.

“Frankly, we’re in the midst of a downward spiral and the momentum is building,” Chief Executive Officer Stuart Miller said on a conference call with analysts.

To contact the reporter on this story: Bob Willis in Washington at bwillis@bloomberg.net