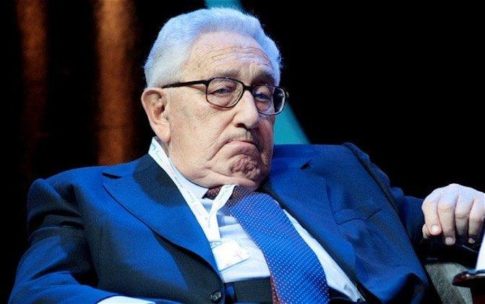 Former Secretary of State Henry Kissinger has said that he agrees with the aggressive statements President Trump has made towards North Korea.

The former Secretary of State said that the Trump Administration “will hit that fork in the road, and the temptation to deal with it with a pre-emptive attack” against North Korea “is strong, and the argument is rational.”

The Trump administration has signaled that North Korea would be crossing a red line if it developed nuclear capability for its intercontinental ballistic missile program. Yet some policy officials and military experts claim that North Korea has already crossed that line, or is at least very close to attaching nuclear warheads to its missiles. 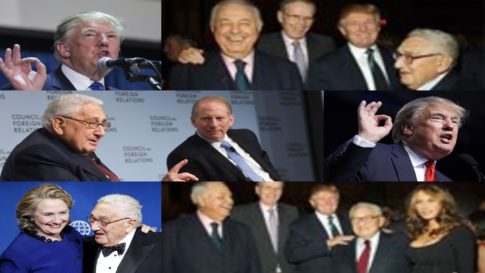 – Kissinger Just Met With Trump for the Third Time This Year — Here’s Why It Matters:

President Trump met with alleged war criminal Henry Kissinger on Tuesday, the third meeting Trump has had with Kissinger this year. While the media has focused on Trump’s push to use the former secretary of state’s visit as a ploy to bash Obamacare, their recent meeting likely also signifies something more sinister than the plan to destroy an already woeful healthcare system.

According to the Daily Beast, a White House official told the outlet that Kissinger was meeting with Trump mainly to discuss North Korea and China. The White House transcript shows Kissinger’s first statement on the matter was specifically about Trump’s upcoming trip to Asia, which should tell you something about the real reasons Kissinger was eager to meet with Trump.

For the record, Henry Kissinger was responsible for the U.S. government’s secret bombings of Indochina, as well as disastrous coups in Latin America. His travel is very much restricted for fear of arrest.

Kissinger also wrote a strong opinion earlier this year where he actively warned against defeating ISIS simply because the terror group’s downfall would empower Iran.

Trump had fully embraced the dark side long before he became President of the United States.

– Kissinger is the Dark Side of Trump in Syria

Read moreKissinger is the Dark Side of Trump in Syria

– What is Henry Kissinger Up To? — Paul Craig Roberts:

The English language Russian news agency, Sputnik, reports that former US Secretary of State Henry Kissinger is advising US president-elect Donald Trump how to “bring the United States and Russia closer together to offset China’s military buildup.” https://sputniknews.com/politics/201612271049024500-kissinger-trump-russia/ If we take this report at face value, it tells us that Kissinger, an old cold warrior, is working to use Trump’s commitment to better relations with Russia in order to separate Russia from its strategic alliance with China.

Read moreDr. Paul Craig Roberts: What is Henry Kissinger Up To?

– Trump’s personality ‘unprecedented’, vision of new world order yet to be seen – Kissinger:

The personality of Donald Trump has “no precedent” in modern US history, but he should be given a chance to put forward his policies, Henry Kissinger said, highlighting the president-elect’s potential to shape global politics and keep to the US tradition of “building world peace.”

Speaking at the Nobel Peace Prize Forum in Oslo, Norway, on the issue of “World Peace after the US Presidential Election,” the 93-year-old former diplomat and Nobel Prize winner dispelled fears of the looming cataclysm of Trump’s presidency.

“Before postulating an inevitable crisis, an opportunity should be given to the new administration to put forward its vision of international order,” Kissinger said.

Take a look at this photo (better quality):

Elder statesman, Rockefeller confidant, and master war criminal Henry Kissinger told the globalist Fareed Zakaria voters are not going to get what was advertised with Donald Trump.

“One should not insist on nailing [Trump] into positions that he had taken in the campaign,” Kissinger told Zakaria.

Keeping campaign promises made to voters is counterproductive, according to Kissinger.

– Trump Just Met with Henry Kissinger: ‘I Have Tremendous Respect’ for Him:

Though he vowed to repeal Obamacare on the campaign trail, he has since softened his rhetoric. Though he claimed he would prosecute Hillary Clinton, he now says he doesn’t want to “hurt’ her and has avoided confirming any such plans. Though he initially claimed he would institute a Muslim registry of sorts — and his advisors are reportedly concocting plans to do so — he is yet to confirm whether or not he will implement one (spoiler alert: one was established for people from Muslim-majority countries during the Bush era).

What is clear is that in spite of Trump’s anti-establishment rhetoric, he has thus far decided to surround himself with some of the establishment’s key figures.

Read moreServing TPTB Great Again: Trump Meets with Henry Kissinger: ‘I Have Tremendous Respect’ for Him