Air strikes by the Saudi-led coalition killed 68 civilians in just one day, the United Nations’ humanitarian coordinator in Yemen has said, condemning such “indiscriminate” attacks in an “absurd and futile war”.

Strikes on two sites on 26 December took the total civilian death toll from air strikes in the last ten days to 109, in addition to 75 people who have been injured.

The UN accused the coalition of showing “complete disregard for human life” in an unusually direct criticism of the war in which the Saudi-led coalition, backed by the United States, Britain and others, is fighting Iran-allied Houthi rebels.

The Guardian explains that it was the brutal conduct of the Iraqi Armed Forces that enabled Iraq to successfully liberate Mosul from ISIS’ dominance, stating:

“One of the factors that had aided Isis’s takeover of Mosul was the conduct of the Iraqi army and security forces stationed in the city, who behaved like sectarian occupation forces, mistreating and detaining the population at will. In the early stages of the battle for Mosul, the Iraqi army and police, keen to change their prevailing image, had taken care to preserve the lives of civilians. Soldiers and officers used their vehicles to help people evacuate their homes, and offered water and medical help. But the Old City was seen as the last refuge of Isis, and almost every inhabitant was treated as a suspect. Fighting-age men from other parts of the city, and those with injuries, were detained on the spot. The rest were sent to detention centres, where their identity would be checked.”

According to the non-partisan monitoring group Airwars, the civilian death toll in Mosul may have exceeded 10,000. Those who were fortunate enough to survive coalition bombings were apparently treated as suspected ISIS members, and the result was a host of crimes that should make The Hague cringe.

– White House Closing Down War Crimes Office After Being Accused Of War Crimes:

Secretary of State Rex Tillerson is reportedly closing a decades-old office in the State Department that has helped pursue justice for victims of war crimes.

The “Office of Global Criminal Justice” advises the secretary of state on issues surrounding war crimes and genocide. It was established by Bill Clinton’s secretary of state, Madeleine Albright, a woman who barely batted an eyelid while overseeing the deaths of 500,000 Iraqi children.

ALEPPO, Syria — Russian military forces have discovered mass graves in eastern parts of the Syrian city of Aleppo, with many of the bodies reportedly showing signs of torture.

Maj. Gen. Igor Konashenkov, a spokesperson for the Russian defense ministry, announced the horrifying discovery on Monday. “Many of the corpses were found with missing body parts, and most had gunshot wounds to the head,” he said, according to RT, a Russian state-owned news network.

Huge stockpiles of weaponry and ammunition, many with NATO markings, were discovered in East Aleppo when the Al-Nusra militants, a local branch of Al Qaida, were pushed out of the city by Syrian forces.

The previous reports that NATO personnel were captured are now retracted, as they were allowed to leave with the militants on the buses provided according to the agreement, to spare NATO the embarrassment. FWM interviews the Syrian MP Fares Shehabi, an Aleppo resident himself. He calls the discoveries “SyriaGate”.

Reports coming out of the Russian Defense Ministry indicate that dozens of bodies dumped in mass graves in newly liberated eastern Aleppo have been discovered. Many of the victims were mutilated, missing body parts and summarily executed by gun shot to the head at close range.

Is this the type of “moderate” behavior that hawks such as John McCain and Lindsey Graham have been backing with arms and cash since the conflict in Syria began? Not only was there the grim discovery of the victims of the western backed “moderate” terrorists but there were large amounts of weapons and supplies found in their former strongholds including enough weapons to arm several squadrons of soldiers, rocket systems, tanks and missile launchers.

Mass graves with dozens of bodies of civilians subjected to brutal torture have been discovered in Aleppo neighborhoods left by militants, the Russian Defense Ministry said Monday.

“Thanks to the US support of Saudi Arabia’s war in Yemen, which has included not only the bomb recently used on a MSF hospital, but also supplies of white phosphorus, over 3,700 civilians have been killed and some 2.8 million displaced. Since coming to office seven years ago, the Obama administration has made over $115 billion worth of arms sales to the Saudis – more than any other US presidential administration.” 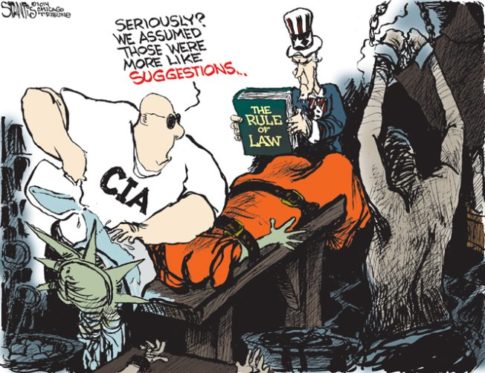 – How the US government perverted the course of justice to avoid war crimes prosecutions:

Above is Part One of a video interview with Baltasar Garzón, the renowned jurist, which includes observations about the attempted prosecutions of Bush officials regarding torture allegations and war crimes – and how the US secretly pressurised the Spanish Government to ensure no such prosecutions took place. (Part Two of the video is given below.)

Part 4: ‘The Other Chilcot’

The US strategy from the beginning of the second Iraq War has been to deflect criticism and prosecution by blaming others. The war began with a lie: that Saddam Hussein had WMD (the true reason for invasion was, of course, oil and an attempt at geo-strategic takeover). During the course of the war the US government ensured it was not charged for war crimes or torture.

This article – the last in the series – concludes with a summary of the main charges of war crimes and torture that could be raised against the Bush administration if ever there was an official investigation (which is highly unlikely).