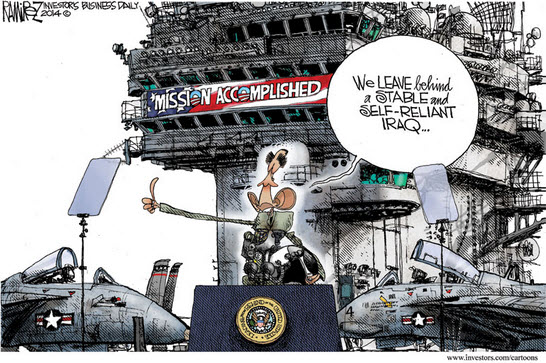 U.S.-trained and armed Iraqi military units, the key to the American strategy against ISIS, are under investigation for committing some of the same atrocities as the terror group, American and Iraqi officials told ABC News. Some Iraqi units have already been cut off from U.S. assistance over “credible” human rights violations, according to a senior military official on the Pentagon’s Joint Staff.

The U.S. is shipping almost $1 billion in weapons, as well as providing U.S. military trainers to instruct new Iraqi recruits. A special operations official in Baghdad, however, said it’s the government of Iraq that decides — not the Pentagon — which Iraqi units get U.S.-donated weapons, such as 43,000 M4 rifles and thousands of other light infantry weapons Congress approved for shipment in December.

“Ministry of Interior officials tortured detainees to death, according to reports from multiple government officials and human rights organizations,” read the annual report. The Bureau explicitly fingered the Iraqi Counter-Terrorism Forces and Interior Ministry’s special police units — which the U.S. established, trained and armed from 2003-2011, and whose troops are seen in many of the atrocities images.

This is another one of those “you can’t make this stuff up” articles, which perfectly highlights the complete idiocy and incompetence of American foreign policy. It’s no wonder nothing gets better, considering the corrupt status quo continues to merely rotate the same empty suits between various positions of power (see:Jeb Bush Exposed Part 1 – His Top Advisors Will Be the Architects of His Brother’s Iraq War). It’s literally like giving people with the mental capacity and wisdom of an infant, nuclear weapons and telling them to go crazy.

The latest revelation from ABC News explains how many of the so-called “good guys” in Iraq, which the U.S. has been training, arming and supporting for years, are essentially indistinguishable from the dreaded ISIS, a group that naturally arose out of another one of America’s foreign policy disasters, the Iraq war.

Read it and weep. From ABC:

U.S.-trained and armed Iraqi military units, the key to the American strategy against ISIS, are under investigation for committing some of the same atrocities as the terror group, American and Iraqi officials told ABC News. Some Iraqi units have already been cut off from U.S. assistance over “credible” human rights violations, according to a senior military official on the Pentagon’s Joint Staff.

The investigation, being conducted by the Iraqi government, was launched after officials were confronted with numerous allegations of “war crimes,” based in part on dozens of ghastly videos and still photos that appear to show uniformed soldiers from some of Iraq’s most elite units and militia members massacring civilians, torturing and executing prisoners, and displaying severed heads.

The videos and photos are part of a trove of disturbing images that ABC News discovered has been circulating within the dark corners of Iraqi social media since last summer. In some U.S. military and Iraqi circles, the Iraqi units and militias under scrutiny are referred to as the “dirty brigades.”

According to the Pentagon, the U.S. already has. In a statement to ABC News, the Joint Staff official revealed that in the months since the U.S. began airstrikes and military assistance to Iraq last August, “We have withheld assistance from certain Iraqi units on the basis of credible information in the past. Due to the sensitive nature of our security assistance, we are unable to discuss specific units.”

In Washington today, Chairman of the Joint Chiefs Gen. Martin Dempsey told lawmakers the U.S. military is keeping a close eye on the militias as well.

The Iraqi military is key to the U.S. strategy to fight ISIS and stop its atrocities, which have outraged the world. The U.S. is shipping almost $1 billion in weapons, as well as providing U.S. military trainers to instruct new Iraqi recruits. A special operations official in Baghdad, however, said it’s the government of Iraq that decides — not the Pentagon — which Iraqi units get U.S.-donated weapons, such as 43,000 M4 rifles and thousands of other light infantry weapons Congress approved for shipment in December. American troops are not known to be operating on the ground in combat in Iraq or Syria. No Americans are shown in the images or footage ABC News has found, nor have any Americans been implicated in any of the alleged atrocities.

“You don’t behead someone and place their head on the front of your Humvee. That’s unacceptable — because it’s a war crime. And it’s an atrocity,” retired U.S. Army Special Forces Lt. Col. James Gavrilis told ABC News.

“I think it’s horrible. I think this really shows a failure of our policy for Iraq,” Gavrilis said, confirming that the imagery looked authentic and too plentiful online to be faked.

“Both sides are committing war crimes,” he said. “This is widespread, it’s endemic.”

Good thing we saved those poor Iraqis from Saddam. I’m sure they are eternally grateful for all the freedom the American government brought to them.

“I’ve seen all sorts of horrible things over the years… but I have never seen anything this bad in my life,” said Ali Khedery, an American former diplomat in Baghdad who advised five U.S. ambassadors in the Iraqi capital and three generals overseeing Middle East operations at U.S. Central Command.

Khedery recently wrote in Foreign Policy about another video, where a man was beaten and machine gunned to death by a gang who appeared to be both militias and Iraqi Special Forces with U.S.-donated M4A1 rifles. He said the video slaughter of the Iraqis accused by their killers of smuggling weapons for ISIS was far worse, because Iraqi government troops were present.

“It was the shooting of unarmed men. This is a U.S.-backed government. They carried U.S. weapons,” he said.

Some militias take pride in their atrocities and appear to often be calling the shots on the battlefield, not the government forces, BloombergView columnist Eli Lake found when he recently visited the front lines north of Baghdad.

“Ministry of Interior officials tortured detainees to death, according to reports from multiple government officials and human rights organizations,” read the annual report. The Bureau explicitly fingered the Iraqi Counter-Terrorism Forces and Interior Ministry’s special police units — which the U.S. established, trained and armed from 2003-2011, and whose troops are seen in many of the atrocities images.

Despite the clear failures in Iraq, and the obvious reality that American leadership has no idea WTF it are doing, it’s not going to stop them from doing more of it. For example, the Wall Street Journal reports that:

President Barack Obama sent Congress suggested legislation in February, calling for a three-year “authorization for the use of military force,” or AUMF, and proposed repealing the 2002 war authorization that granted former President George W. Bush the authority to invade Iraq.

Read that again. The so-called “opposition” political party in the U.S. is upset Obama isn’t being given enough power to cause additional worldwide chaos.

Secretary of State John Kerry, Secretary of Defense Ash Carter and Chairman of the Joint Chiefs of Staff Gen. Martin Dempsey, appearing at a Senate Foreign Relations Committee hearing to testify on the authorization, said they strongly support the measure. They said approving it would show allies and partners as well as Islamic State leaders that there is a strong consensus behind defeating the extremist group, known also as ISIS, ISIL or Daesh.

Mr. Corker and Sen. Bob Menendez (D., N.J.), the committee’s ranking Democrat, said the Obama administration’s request as it stands didn’t have much support from lawmakers of either party. Democrats are concerned the measure gives Mr. Obama and future presidents too much unchecked authority to wage war.

“What it didn’t do, and what I think Democrats are not willing to do is to give this or any other president an open-ended authority for war, a blank check,” Mr. Menendez said.

What’s even more incredible is that the imbeciles in the GOP think that Obama is not being granted enough power to recklessly bomb the world into oblivion. I guess this is what it feels like to have a front row seat to the collapse of empire.

Obama’s ISIS War is Not Only Illegal, it Makes George W. Bush Look Like a Constitutional Scholar

The American Public: A Tough Soldier or a Chicken Hawk Cowering in a Cubicle? Some Thoughts on ISIS Intervention