…as planned by TPTB. 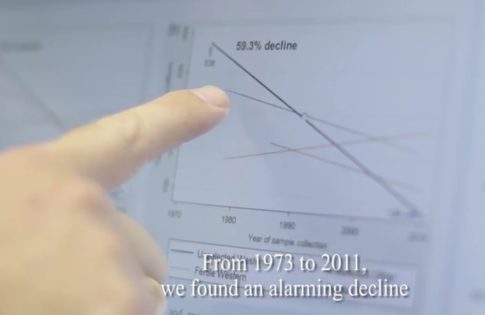 A rigorous new study conducted at the The Hebrew University of Jerusalem and published in the science journal Human Reproduction Update finds that human sperm production has declined 59.3% from 1973 to 2011, trending toward a collapse of human population.

…The researchers found …a 59.3 percent decline in total sperm count, among men from North America, Europe, Australia and New Zealand who were not selected based on their fertility status. These findings strongly suggest a significant decline in male reproductive health that has serious implications beyond fertility and reproduction, given recent evidence linking poor semen quality with higher risk of hospitalization and death.

The causes of the decline have been widely linked to chemical exposure, especially from agricultural chemicals like atrazine that are “chemical castrators” of men. These chemicals cause “feminization” of males, leading to hormonal disruption and sperm population decline. That decline, researchers found, is accelerating in western nations like the United States and could lead to a collapse in human population.

– US Fertility Rate At Lowest Point Since Records Began In 1909

– Research Indicates That GMO Could Be a Cause of Infertility

On a side note:

Total fertility rates, which can be defined as the average number of children born to a woman who survives her reproductive years (aged 15-49), have decreased globally by about half since 1960. This has drastically shaped today’s global economy, but a continued decline could have much more severe long-term consequences.

Exposure to endocrine-disrupting chemicals, including bisphenol A (BPA) and phthalates, has been linked to a wide array of health problems, including infertility, diabetes, obesity and neurological problems, according to a scientific statement by the Endocrine Society.

Endocrine disruptors are chemicals that mimic or disrupt the action of hormones in the body. Because hormones control so many delicate bodily functions, the health implications of such disruption are enormous.

Now a study conducted by researchers from the University of Michigan, and published in the Journal of Clinical Endocrinology & Metabolism, has demonstrated another potential effect of endocrine disruption: lower vitamin D levels.

Infertility is a systemic health issue that many couples do not understand and have a hard time talking about. When a woman is ready to conceive, her heart is passionately involved because she has committed all her love to courageously bringing new life into the world. When she struggles to conceive, she feels inadequate.

A woman’s ability to conceive relies on a well-functioning endocrine system that naturally regulates a delicate balance of hormones within the body. With so many industrial toxins and endocrine disrupting chemicals warring against her natural chemistry inside, hormone levels can be disrupted, suppressed, or artificially increased, sending conflicting messages and changing how the glands function altogether.

Economists figured the recovery would bring about increased confidence and a rise in the birth rate.

Instead, the rate dropped into a tie with the lowest birth rate on record.

This is yet another surprise for economists to ponder.

… as intended by the power elite.

A new study in rats found that Roundup altered testicular function after only 8 days of exposure at a concentration of only 0.5%, similar to levels found in water after agricultural spraying, writes Claire Robinson, Managing Editor of GMO Seralini.

The study found no difference in sperm concentration, viability and mobility, but there was an increase in abnormal sperm formation measured 2, 3, and 4 months after this short exposure.