In the weeks following the atomic attacks on Japan sixty-six years ago this week, and then for decades afterward, the United States engaged in airtight suppression of all film shot in Hiroshima and Nagasaki after the bombings. This included vivid color footage shot by U.S. military crews and black-and-white Japanese newsreel film.

The public did not see any of the newsreel footage for twenty-five years, and the shocking US military film remained hidden for nearly four decades. While the suppression of nuclear truths stretched over decades, Hiroshima sank into “a kind of hole in human history,” as the writer Mary McCarthy observed. The United States engaged in a costly and dangerous nuclear arms race. Thousands of nuclear warheads remain in the world, often under loose control; the United States retains its “first-strike” nuclear policy; and much of the world is partly or largely dependent on nuclear power plants, which pose their own hazards. 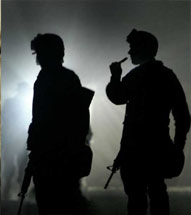 Editor’s note: On Oct. 14, 2008, Salon published an article about the deaths of Army Pfc. Albert Nelson and Pfc. Roger Suarez. The Army attributed their deaths in Iraq in 2006 to enemy action; Salon’s investigation, which included graphic battle video and eyewitness testimony, indicated that their deaths were likely due to friendly fire.

Nov. 20, 2008 | FORT CARSON, Colo. — Last month, Salon published a story reporting that U.S. Army Pfc. Albert Nelson and Pfc. Roger Suarez were killed by U.S. tank fire in Ramadi, Iraq, in late 2006, in an incident partially captured on video, but that an Army investigation instead blamed their deaths on enemy action.

Now Salon has learned that documents relating to the two men were shredded hours after the story was published. Three soldiers at Fort Carson, Colo. – including two who were present in Ramadi during the friendly fire incident, one of them just feet from where Nelson and Suarez died – were ordered to shred two boxes full of documents about Nelson and Suarez. One of the soldiers preserved some of the documents as proof that the shredding occurred and provided them to Salon. All three soldiers, with the assistance of a U.S. senator’s office, have since been relocated for their safety.
– – – – – – – – – – – –
Oct. 14 was a long and eventful day at Fort Carson. The post had been in an uproar. The night before, Salon had published my article airing claims that two of the base’s soldiers, Pfc. Albert Nelson and Pfc. Roger Suarez-Gonzalez, had been killed by friendly fire in Iraq on Dec. 4, 2006, but that the Army covered up the cause of death, attributing it to enemy action.

Based on the testimony of eyewitnesses, and on video and audio recorded by a helmet-mounted camera that captured much of the action that day, my report stated that Nelson and Suarez seemed to have been killed by an American tank shell. The shell apparently struck their position on the roof of a two-story ferro-concrete building in Ramadi, Anbar province, Iraq, killing Suarez instantly, mortally wounding Nelson, and injuring several other soldiers. I included both an edited and a full-length version of the video in the article. The video shows soldiers just after the blast claiming to have watched the tank fire on them. Then a sergeant attempts to report over a radio that a U.S. tank killed his men. He seems to be promptly overruled by a superior officer who is not at the scene. An official Army investigation then found that the simultaneous impact of two enemy mortars killed the men.