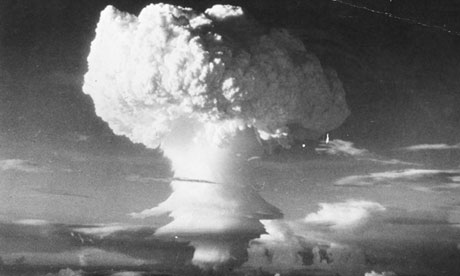 Read moreSecret Document: US Nearly Detonated Atomic Bomb Over North Carolina That Would Have Been 260 Times More Powerful Than The Hiroshima Bomb

… and Libya, Yemen, Somalia, Pakistan and …

The meteor that streaked across the skies over Russia on Friday exploded with a force 30 times greater than the Hiroshima bomb, Nasa scientists have said.

The 55 foot wide rock, said by Nasa to have a mass of 10,000 tonnes, lit up the sky above the Urals region on Friday morning, causing shockwaves that injured 1,200 people and damaged thousands of homes in an event unprecedented in modern times.

Nasa estimated that the energy released as the meteor’s disintegrated in the atmosphere was 500 kilotons, around 30 times the size of the nuclear bomb dropped on Hiroshima in 1945.

At 8:15 AM 67 years ago, Hiroshima got the first atomic bomb in the world.

So far, 280,959 people died. Only within this year, no less than 5,729 people are added to the list. (cf. Ministry of health concealed the survey data of atomic bomb victims)

They hold a ceremony every year and state they won’t let the world repeat the same tragedy, but Japanese government is still reluctant to admit the fact that black rain fell not to pay the compensation.

As a matter of fact, they shall give the statement to themselves.

According to the report of Japanese government in 2011, which is presumed to be the most moderate estimate, Fukushima reactor1 ~ 3 emit as 168 times much cesium-137 as Hiroshima atomic bomb by August of 2011. 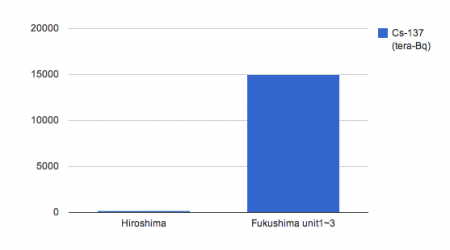 Moreover, there was no emission of Cs-134 in Hiroshima, so it is not comparable with Fukushima.

The data is not published to count possible emission from reactor4, also, sea contamination is not counted either.

It has been about 17 months since 311. It’s been like having a Hiroshima atomic bomb every 3 days since 311.

It can be more than that in reality because radiation still keeps leaking.

Read moreFukushima: Japan Dropped More Than 168 Hiroshima Bombs On Itself … Based On The Most Moderate Estimate And Cesium-137 Alone

Remember the interview with Leuren Moret where she stated that the US has been doing radiation effect research for all those years (to this day) using the Japanese people in Hiroshima and Nagasaki as guinea pigs?

Speaking of RERF – Radiation Effect Research Foundation – which succeeded the notorious ABCC – Atomic Bomb Casualty Commission – in 1975, RERF just came up with the area map of so-called “black rain” after the Hiroshima bombing. They had the survey data of 13,000 people all along, but sat on it for 66 years.

And surprise, surprise. The map shows the area where the “black rain” – radioactive fallout that fell with the rain – fell to be much, much bigger than what the government has admitted so far.

And not at all surprisingly, Toshiteru Okubo, chairman of RERF, says “Personally I do not think this data is important. It’s hard to believe the black rain caused an acute radiation sickness anyway.”

The chairman is right. People who have said they suffer the effect of radioactive fallout that they received by the black rain are not suffering an acute radiation sickness that would have caused them to die in a short period of time after the exposure.

On December 20, Radiation Effect Research Foundation, a cooperative Japan-US research organization (RERF, Minami-ku in Hiroshima City and in Nagasaki City) disclosed the distribution map of “black rain” that fell after the nuclear bomb exploded over Hiroshima. The map was created from the survey data of about 13,000 people who were exposed to the black rain. Citizens’ groups calling for more assistance for the bomb victims are hopeful that this may result in more areas becoming eligible for assistance. On the other hand, RERF says “There is no new discovery”, insisting [the map] would not help in understanding health damages. But it is likely that the data will be submitted to a study group of the national government, and discussions may ensue as to whether the support areas should be revised.