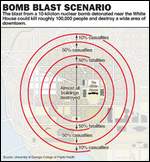 The Senate committee has convened a series of hearings to examine the threat and effects of a terrorist nuclear attack on a U.S. city, as well as the needed response.

Yesterday’s panel stressed the importance of state and local cooperation with federal authorities in the wake of an attack, assistance from the private business sector to aid recovery and the dire need to boost the capabilities of area hospitals.

They recommended expanding emergency personnel by training physicians like pharmacists and dentists to aid in all-hazards care, monitoring the exposure of first responders to radiation and clearly disseminating information to the public.

“The scenarios we discuss today are very hard for us to contemplate, and so emotionally traumatic and unsettling that it is tempting to push them aside,” said Sen. Joe Lieberman, Connecticut independent and committee chairman. “However, now is the time to have this difficult conversation, to ask the tough questions, and then to get answers as best we can and take preparatory and preventive action.”

Ashton B. Carter, co-director of the Preventive Defense Project at Harvard University, said the likelihood of a nuclear attack on U.S. soil is undetermined, but it has increased with the proliferation of weapons by Iran and North Korea and the failure to secure Russia’s nuclear arsenal following the Cold War.

“For while the probability of a nuclear weapon one day going off in a U.S. city cannot be calculated, it is almost surely larger than it was five years ago,” Mr. Carter said.

Mr. Carter described a more destructive blast effect. He said the ground-based detonation of a 10-kiloton bomb would result in near-total devastation within a circle about two miles in diameter, or the length of the Mall.

The zone of destruction is projected to be less than that of Hiroshima, where the bomb was dropped from an airplane and detonated above the city.

A similar blast in a more densely populated city than the District, such as Chicago or New York, would result in an injury toll up to eight times higher. A plume a few miles long could also dole out lethal doses of radiation, Mr. Carter said.

However, the experts emphasized that the explosion would not impact most of a major city and that in many cases, residents could remain safe by not evacuating immediately and clogging area roadways.

“It is also expected that, due to lack of information getting to the public, many people will try to flee by car or on foot, often in the wrong direction, again exposing themselves to high levels of radiation, as vehicles provide virtually no protection,” Mr. Carter said.

Mr. Dallas said a major problem facing most cities is a lack of available hospital beds for victims of burns that would result from a nuclear blast. He said up to 95 percent of such victims would not receive potentially life-saving care.

“We’re completely underprepared,” he said. “Most of them will die.”

Mr. Dallas said the District also faces a unique challenge because of the way the city is configured geographically: A wind blowing west to east would gradually spread radiation from the explosion into the low-income neighborhoods of Southeast, where there are limited health care options available and only one hospital.

Area officials have spent millions of dollars in recent years to develop evacuation plans and stockpile emergency supplies after a 2006 study by the U.S. Department of Homeland Security said local preparation for a disaster was “not sufficient.”

Darrell L. Darnell, director of the District’s Homeland Security and Emergency Management Agency, said the city is continuing to develop its “emergency preparedness capabilities” and has numerous methods of informing residents of actions they should take, including through text messages, voice alerts and Web sites like www.dc.gov and http://72hours.dc.gov.

“We are confident that the District is prepared to respond to a catastrophic incident affecting the District,” Mr. Darnell said.

Still, Mr. Dallas said the majority of victims in a nuclear explosion will likely have to fend for themselves in the first hours after an attack.

“These people are going to be on their own,” he said after the hearing. “There’s no white horse to ride to the rescue.”