Authored by Jose Nino via GunPowderMagazine.com,

South Africa is opening the door for tyranny. 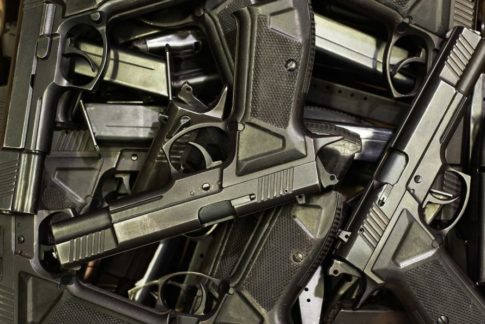 The Constitutional Court of South Africa recently ruled that 300,000 gun owners must turn in their firearms.

This judgement came in response to the North Gauteng High Court’s ruling in 2017 which said Section 24 and Section 28 of the Firearm’s Control Act were unconstitutional.

A report from The Citizen explains what Section 24 and Section 28 entail:

“Section 24 of the Act requires that any person who seeks to renew a licence must do so 90 days before its expiry date Section 28 stipulates that if a firearm licence has been cancelled‚ the firearm must be disposed of or forfeited to the state. A 60-day time frame was placed on its disposal, which was to be done through a dealer.”

Now that the High Court’s initial ruling has been overturned, gun owners who failed to renew their firearms licenses must hand in their firearms to the nearest police station, where authorities will then proceed to destroy them.

– ‘Thank you, Australia’: Hundreds rally in Brisbane to highlight the plight of South African farmers:

THE South African community has marched in support of Immigration Minister Peter Dutton over a controversial refugee offer to persecuted white farmers.

LARGE crowds of protesters chanting “thank you, Australia” and “thank you, Mr Dutton” marched through Brisbane’s CBD on Sunday in support of the government’s offer to bring persecuted South African farmers to Australia under the humanitarian program.

The march, organised by the Brisbane South African community and supported by Liberal backbencher Andrew Laming and independent Senator Fraser Anning, started at Emma Miller Place and ended at Queensland Parliament on George Street, where community members gave speeches highlighting the plight of their family and friends back home.

Read more‘Thank you, Australia’: Hundreds rally in Brisbane to highlight the plight of South African farmers

– Inside the ‘most dangerous job in the world’: White farmers in South Africa are FOUR times more likely to be murdered than anyone else – as Peter Dutton vows to ‘fast-track’ them into Australia as refugees:

Australia’s Home Affairs Minister Peter Dutton has dismissed claims of racism over his plan to resettle South African white minority farmers in Australia, saying he ignores the confected outrage “from some of the crazy lefties at the Guardian and Huffington Post.”

Mr. Dutton faced a backlash after he first announced the farmers needed “special attention” because of the epidemic of violence engulfing them.

As Breitbart News reported, Mr. Dutton noted Australia has refugee, humanitarian and other visa programs which have the “potential to help some of these people”. He said he had asked his department to look at the options “because from what I have seen they do do need help from a civilised country like ours”.

Violent attacks against South Africa’s white farmers are on the rise, according to Paul Toohey, a reporter from Australia’s Daily Telegraph, who traveled to the country.

Last month, South Africa’s parliament voted to allow white-owned land expropriation without compensation. That followed South Africa’s new President Cyril Ramaphosa’s pledge to return the lands owned by white farmers since the 1600s to the black citizens of the country. He claimed the land was “taken under colonialism and apartheid.”

“This is normal in South Africa to be attacked on a farm,” a 39-year old farmer Berdus Henrico told the reporter.

Berdus and his 51-year old partner Estelle Nieuwenhuys have been raided in the Limpopo province. The farmer has three bullet wounds – two through his shoulder and one through his face that came out the back of his neck.

“They took my hunting gun, my shotgun, two cell phones, our DVD player, our TV,” said Berdus, adding that Estelle was praying, out loud, begging them to stop.

“They want money and they want guns. They want the people off the land so as they can go on like they want to. They want it here like it was in Zimbabwe a few years ago when they chased all the whites out and let it go to the ground.”

Australia will be making no special visa considerations for white South African farmers, Julie Bishop said, as she refused to back Peter Dutton’s claim the group deserved “special treatment” over alleged persecution.

The foreign minister became the latest senior government figure to dismiss one of the home affairs minister’s policy ideas, which in recent months have included limiting Australia’s migration intake and labelling white South African farmers the “sorts of migrants that we want to bring into our country”.

Dutton has previously been made to walk back comments he made during his regular segment on Sydney radio 2GB. At other times his colleagues have swiftly dismissed his ideas.

That South Africa has a high murder rate is hardly a surprise, but when the numbers are laid out so prominently, it really hits home.

A report released by the Institute of Race Relations (IRR) on Thursday revealed that around 445 835 murders had been recorded in the country between April 1994 and March 2016.

The report used data from the South African police service and shows that for every 100 000 people in the country, 34 were murdered. The deadliest year on record in democratic South Africa was in 1995/96 with 26 877 being killed, according to the report.

…which will mean civil war!!!

The South African parliament voted on Tuesday in favor of a motion seeking to change the constitution to allow white-owned land expropriation without compensation.

The motion, which was brought by Julius Malema – the leader of the radical Marxist opposition party, the Economic Freedom Fighters – passed by a wide margin of 241 votes to 83 against.

Several parties – the Democratic Alliance, Freedom Front Plus, Cope and the African Christian Democratic Party – did not support the motion. The matter has been referred to the parliament’s Constitutional Review Committee, which must report back by August 30.

“The time for reconciliation is over. Now is the time for justice,” Malema told the parliament. “We must ensure that we restore the dignity of our people without compensating the criminals who stole our land.”

South Africa has a population of over 50 million people. According to a 2017 government audit, white people own 72 percent of farmland.

The new President of #SouthAfrica used his first State of the Nation Address to promise the seizure of white farmers' land without compensation. EFF leader Julius Malema called anyone opposed to this an "enemy of the people".

So much for the 'Rainbow Nation'. pic.twitter.com/M0HDlMIWnQ

Civil war has been predicted in South Africa prior to WW3.

And they're due to receive $310,500,000 in foreign aid this year? Really? pic.twitter.com/hFIjDUYAlL

South African Drought Slams Everything From Grapes to Lambshttps://t.co/Pw585J4Xht

All-out civil war has been predicted for South Africa by Nicolaas “Siener” van Rensburg (born 1864 – 1926), who foresaw WW1, WW2, the migrant crisis and a white President (Donald Trump) taking over from a black President (Barack Obama) many years ago, which would be sign for South Africans that the worst crisis they – and the world – will ever face is about to begin. And yes, van Rensburg also foresaw WW3.

Here's what he believes with respect to Whites; they should have their wealth confiscated bit-by-bit until nothing is left.https://t.co/AnATmqoMel

Cyril Ramaphosa and the story of the frogs in the water

In recently published memoirs, one of Cyril Ramaphosa’s main opponents pays generous tribute to his character and negotiating skills during the talks leading up to the new South African constitution and the election in 1994.

Dr Mario Oriani-Ambrosini, who died in 2014, was a constitutional lawyer who became an  MP. He was also a key adviser to Prince Mangosuthu Buthelezi both during the negotiations and afterwards when the latter was minister of home affairs in the governments of national unity. His memoirs – the Prince and I: A South African Institutional Odyssey – are published this year by his estate.

According to the memoirs, Mr Ramaphosa, “stood head and shoulders above his colleagues” in the African National Congress (ANC) as well as above the National Party’s negotiators. He was a “born leader” and a “straight shooter”. Nor did he ever lie or “misrepresent anything”.

What then are we to make of this paragraph in Dr Oriani-Ambrosini’s intriguing memoirs?

“In his brutal honesty, Ramaphosa told me of the ANC’s 25-year strategy to deal with the whites: it would be like boiling a frog alive, which is done by raising the temperature very slowly. Being cold-blooded, the frog does not notice the slow temperature increase, but if the temperature is raised suddenly, the frog will jump out of the water. He meant that the black majority would pass laws transferring wealth, land, and economic power from white to black slowly and incrementally, until the whites lost all they had gained in South Africa, but without taking too much from them at any given time to cause them to rebel or fight.”

Read moreCyril Ramaphosa has been elected to replace Jacob Zuma as leader of South Africa’s ruling ANC party. Here’s what he believes with respect to Whites; they should have their wealth confiscated bit-by-bit until nothing is left.