Qaddafi on his way out, Bashar al Assad is next.

Former Democratic Sen. Bob Graham, who in 2002 chaired the congressional Joint Inquiry into 9/11, maintains the FBI is covering up a Saudi support cell in Sarasota for the hijackers. He says the al-Hijjis’ “urgent” pre-9/11 exit suggests “someone may have tipped them off” about the coming attacks.

Graham has been working with a 14-member group in Congress to urge President Obama to declassify 28 pages of the final report of his inquiry which were originally redacted, wholesale, by President George W. Bush.

“The 28 pages primarily relate to who financed 9/11, and they point a very strong finger at Saudi Arabia as being the principal financier,” he said, adding, “I am speaking of the kingdom,” or government, of Saudi Arabia, not just wealthy individual Saudi donors.

Sources who have read the censored Saudi section say it cites CIA and FBI case files that directly implicate officials of the Saudi Embassy in Washington and its consulate in Los Angeles in the attacks — which, if true, would make 9/11 not just an act of terrorism, but an act of war by a foreign government.

For just and obvious reasons, it’s illegal under U.S. law for foreign governments to finance individual candidates or political parties. Unfortunately, this doesn’t stop them from bribing politicians and bureaucrats using other opaque channels.

“The security and popular forces have held captive an Israeli colonel,” a commander of Iraq’s popular mobilization forces said on Thursday.

“The Zionist officer is ranked colonel and had participated in the Takfiri ISIL group’s terrorist operations,” he added. 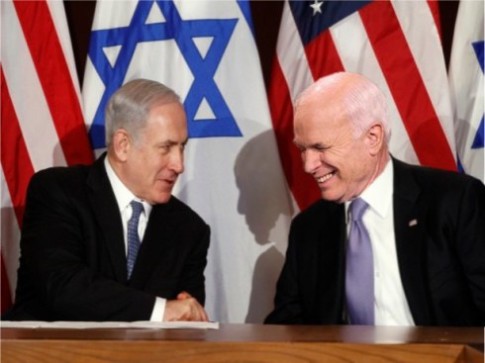 The two US Navy riverine command boats intercepted in Iranian territorial waters yesterday were sent on their way along with the crew of 10 US sailors after brief detention on Iranian soil. According to news reports, the well-armed warships either suffered mechanical or navigational difficulties which caused them to enter Iranian territory (although it may well have been a game of cat-and-mouse to test the Iranian response). The US sailors were apparently treated well, enjoyed what appeared a decent meal in relaxed surroundings, and in the end apologized for the mistake and praised their treatment by the Iranians.

– Caught On Tape: John McCain “Guarantees Russia Will Not Act” In Syria:

Someone once asked Vladimir Putin what he thought of Senator John McCain’s suggestion that the Russian president would one day go the way of Muammar Gaddafi. Here’s what Putin said:

“McCain sat in a pit in Vietnam for several years, anyone would go nuts after that.”

And while we’re not sure if we would go so far as to call McCain “nuts” – because that would effectively exonerate him and relieve him of any responsibility for what he says – we would certainly put him the category of “uber hawk” and we don’t mean he’s angling for an FOMC hike.

As you might recall, McCain pushed hard for the ouster of Russian-backed Viktor Yanukovych in Ukraine.

Read moreCaught On Tape: John McCain “Guarantees Russia Will Not Act” In Syria

“Now here we have a classic example of a total arse-hole.”

October 02, 2015 “Information Clearing House” –  Sen. John McCain has a personal stake in the ISIS and al-Qaeda members currently being targeted by Russian fighter planes. It was just two years ago that McCain found himself in the embarrassing position of having to explain his sleepover with a group of ISIS-affiliated terrorists in Syria. He has repeatedly called for more direct US military involvement to overthrow the Syrian government. Repeated stories of the failures of the US rebel training program have only steeled his resolve. Facts must not get in the way of McCain’s regime change plans for Syria.

But McCain’s plans for Syria have suddenly come to a screeching halt with the arrival of the Russian military. ISIS and al-Qaeda and their affiliated groups are suddenly under the Russian gun. Indeed it appears that Russia has made more progress in two days of bombing than the US-led coalition has made in a year.

What to do? McCain has come up with an idea: arm the rebels with missiles and help them shoot down Russian airplanes!

Asked by Fox News’ Neil Cavuto what the US should do about Russia’s attacks on CIA-trained (but al-Qaeda affiliated) fighters in Syria, McCain responded:

On Friday, August 14, Arizona Senator John McCain was confronted several times by Native activists and elders while visiting the Navajo Nation. McCain and Arizona Governor Doug Ducey were meeting with the Navajo at the Navajo Nation Museum in Window Rock for an event honoring the Navajo Code Talkers of World War 2.

The governor and senator were also meeting with local Navajo officials to discuss their concerns about a new proposal regarding the Little Colorado River rights. Navajo Nation President Russell Begay told the Navajo Times that water was going to be a part of the talks. 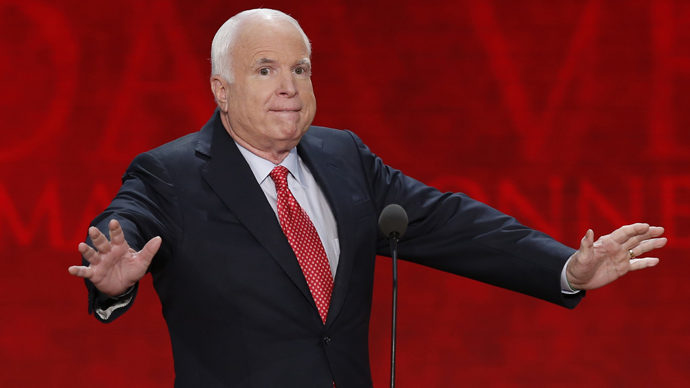 The US will be able to supply natural gas to Ukraine and Europe within two years, Senator John McCain pledged in Kiev. The American politician believes that only gas reliance prevents European countries from hardening sanctions against Russia.

“The United States will supply natural gas to Ukraine and other parts of Europe in two years,” McCain said on Saturday, RIA Novosti reported.

John McCain may find himself ‘back in the (former) USSR’ more frequently as the Senator landed on Ukrainian President Poroshenko’s list of advisers along with former Georgian President (and current fugitive) Miheil Saakashvili. This should give McCain an opportunity to realize his dream of turning the ‘conflict’ with Russia into a proper war that self-respecting hawks can be proud of.