The reaction of Sen. Dianne Feinstein (D-CA) to last week’s revelations that the CIA secretly searched Senate Intelligence Committee computers reveals much about what the elites in government think about the rest of us. “Spy on thee, but not on me!”

The hypocrisy of Sen. Feinstein is astounding. She is the biggest backer of the NSA spying on the rest of us, but when the tables are turned and her staff is the target she becomes irate. But there is more to it than that. There is an attitude in Washington that the laws Congress passes do not apply to Members. They can trample our civil liberties, they believe, but it should never affect their own freedom.

Read moreRon Paul: “If Spying On Senate Is So Bad, Why Is It OK For Them To Spy On Us?” 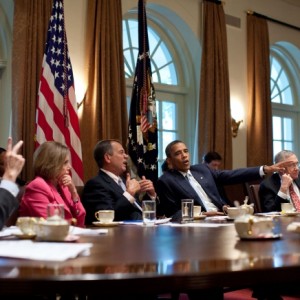 If you want to live the high life, you don’t have to become a rap star, a professional athlete or a Wall Street banker.  All it really takes is winning an election.  Right now, more than half of all the members of Congress are millionaires, and most of them leave “public service” far wealthier than when they entered it.  Since most of them have so much money, you would think that they would be willing to do a little “belt-tightening” for the sake of the American people.  After all, things are supposedly “extremely tight” in Washington D.C. right now.  In fact, just the other day Nancy Pelosi insisted that there were “no more cuts to make” to the federal budget.  But even as they claim that things are so tough right now, our politicians continue to live the high life at the expense of U.S. taxpayers.  The statistics that I am about to share with you are very disturbing.  Please share them with everyone that you know.  The American people deserve the truth.

According to the Weekly Standard, an absolutely insane amount of money is being spent on the “hair care needs” of U.S. Senators:

Read more$5.25 Million For Senate Hair Care And 21 Other Ways Politicians Are Living The High Life At Your Expense

Senators on Wednesday tried to write a tight resolution authorizing President Obama to strike Syria under very specific circumstances, but analysts and lawmakers said the language still has plenty of holes the White House could use to expand military action well beyond what Congress appears to intend.

“Wiggle room? Plenty of that,” said Louis Fisher, scholar in residence at the Constitution Project and former long-time expert for the Congressional Research Service on separation of powers issues.

Barack Obama’s plan to launch punitive strikes against the regime of Bashar al-Assad received a boost on Wednesday when the Senate foreign relations committee voted in favour of military authorisation.

The influential committee voted by 10 votes to seven in favour of granting the formal military authorisation requested by Barack Obama, paving the way for a full vote on the floor of the Senate early next week in response to alleged chemical weapons use in Syria.

The United States Senate Foreign Relations Committee voted on Wednesday to approve President Barack Obama’s plan to strike Syria in retaliation for the reported use of chemical weapons by leader Bashar al-Assad’s regime.

A committee vote on Wednesday afternoon ended with the advancement of a bill compelling the US military responds to Assad’s regime, and will next go to the full Senate for debate.

The committee voted 10-to-7 in favor of using military force, with one lawmakers voting only “present.”

Should Congress move to approve the president’s request, the US could soon initiate a limited strike on Syria that is meant to reprimand Assad for his alleged use of chemical weapons on August 21 outside the city of Damascus. The Obama administration says more than 1,400 people, including hundreds of women and children, were killed in that assault.

Earlier today I called John McCain a weapon of mass destruction on Twitter. Little did I know that just moments later he would be caught playing a game of poker on his iPhone during the Senate’s hearing on launching missiles at Syria.

Nevertheless, none of this should surprise us, as John McCain has shown signs of severe dementia for quite some time now. Let’s take a quick trip down memory lane and examine some of his tweets from years past.

Quite interesting that he made that comment two years before the chemical attack that we supposedly must respond to militarily.

Now finally, here is the man in 2013, during the Senate hearing on the starting of World War III. 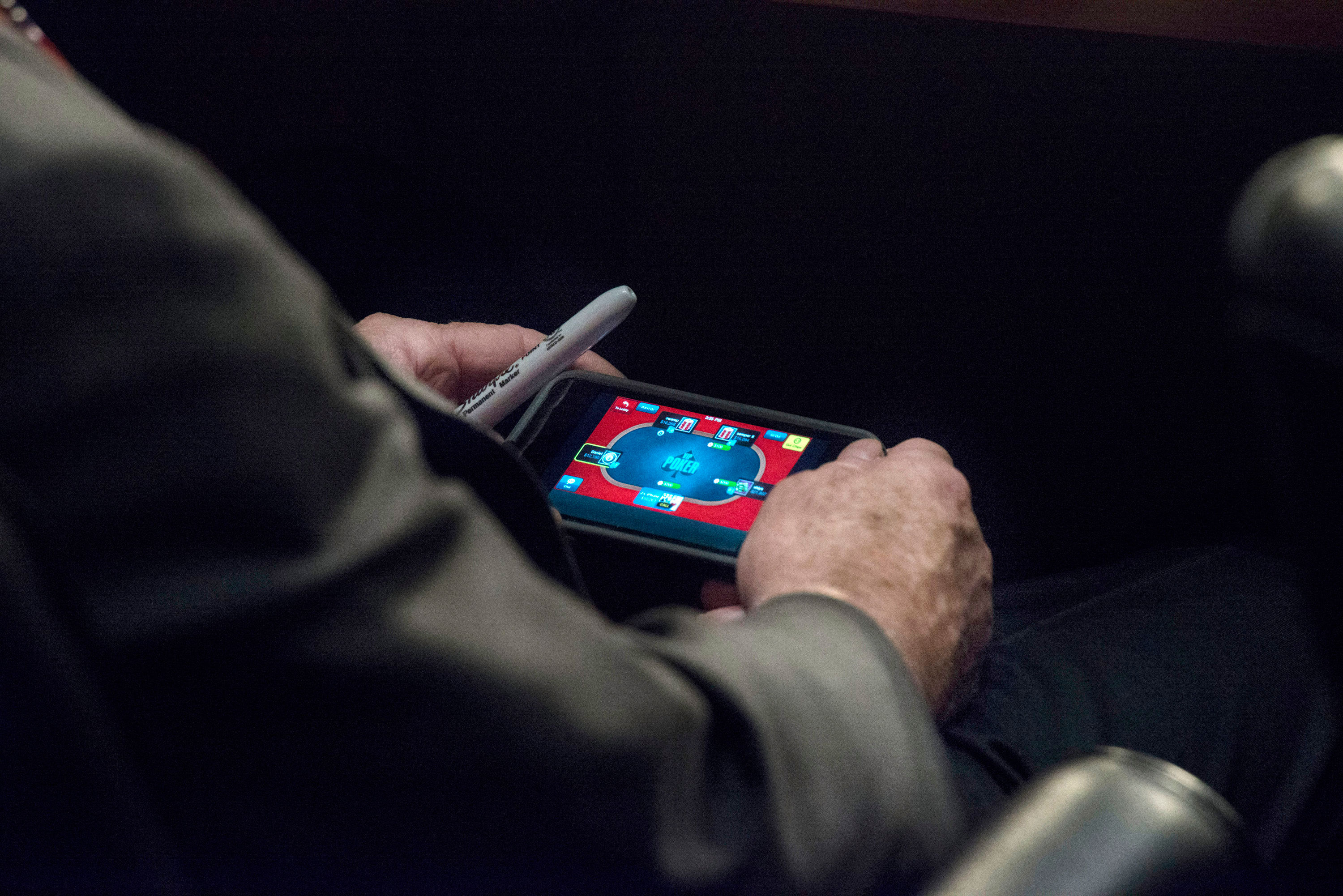 Somebody please tell me why this man has a say in anything we do as a nation. 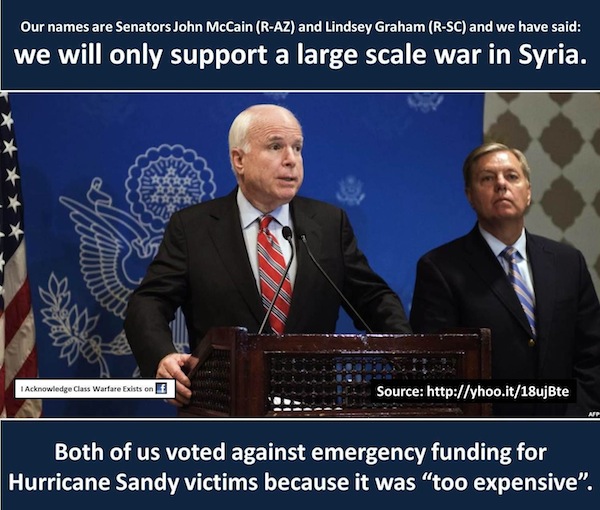 – US senators call for tougher sanctions against Iran (PressTV, Aug 3, 2013):

An overwhelming majority of US senators have signed a letter to President Barack Obama, warning against a new round of diplomacy with Iran as Hassan Rohani, the Islamic Republic’s new president, takes office.

The letter, signed by 76 senators, calls for stiffer sanctions against Iran and insists that the window for diplomacy “is coming to an end.”

“Iran has used negotiations in the past to stall for time,” the letter reads.

The senators also assert that the US must reinforce the credibility of Washington’s option to use military force against Iran.

Read moreUS Senators Call For Tougher Sanctions Against Iran, Insist That Window For Diplomacy ‘Is Coming To An End’

Washington — The U.S. Senate gave final approval Thursday to a roughly 1,200-page bill that promises to overhaul immigration laws for the first time since 1986, creating a path to citizenship for millions of undocumented residents while ratcheting up security along the Mexican border.

Senators passed the sweeping legislation — initially drafted by the four Democrats and four Republicans in the chamber’s so-called “Gang of Eight” — by a 68-32 vote.

Fourteen Republicans joined a united Democratic caucus in supporting the bill, which is backed by the White House and has the potential to become the crowning legislative achievement of President Barack Obama’s second term.

In a White House statement, Obama hailed the Senate vote as “a critical step” toward fixing what he called a broken immigration system. He labeled the measure that now goes to the Republican-controlled House a compromise, adding that “we just need Congress to finish the job.”