Remember that Rand Paul endorsed traitor Romney who supports an Israeli attack on Iran and ‘Wants To Attack Iran To Prevent A Dirty Bomb‘ (= WW III).

Also remember that we have already started the war … 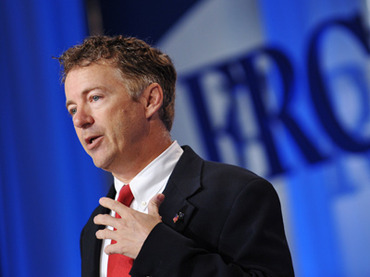 The US Senate voted 90-1 early Saturday on a non-binding resolution to prevent Iran from acquiring nuclear weapons. Voting against the resolution was Sen. Rand Paul, arguing that the bill was a de-facto declaration of war.

The measure, which was introduced several months ago by Senators Lindsey Graham, Bob Casey and Joe Lieberman, supports continuing to pressure Iran to suspend its uranium enrichment program. The resolution advocates using methods other than containment to stop Iran, including exerting economic and diplomatic pressure. Senate Joint Resolution 41 “rejects any United States policy that would rely on efforts to contain a nuclear weapons-capable Iran.” Senators expressed their fears regarding Iran’s nuclear capabilities.

“We know that Iran would create access for terrorists – access for them – to these nuclear weapons, making the Middle East a nuclear tinbox,” Sen. Richard Blumenthal said before the Senate. “We cannot trust this regime. We know that fact beyond any potential doubt.”

The bill states that it should not be misinterpreted as an endorsement for military force or war. But as the only senator to vote against the resolution, Paul argued that the resolution would eventually lead to war with Iran.

“A vote for this resolution is a vote for the concept of preemptive war,” Paul said before the Senate.

Passage of the resolution comes at a time when Israeli Prime Minister Benjamin Netanyahu, has been pressuring the US for an answer as to what would prompt a US-led military strike against Iran.

Currently, the US is already imposing tough sanctions on Iran to limit its oil sales, hurt its economy and make it problematic for Iran to finance its nuclear enrichment program.

Iran has continuously insisted that its nuclear program is entirely for peaceful, civilian ends.