– And the Most Popular Political Party in America is… (Liberty Blitzkrieg, Jan 8, 2014):

The following poll results from Gallup represent the most significant domestic news story I have come across in 2014 to-date. Gallup polling in 2013 showed that the highest number of Americans now identify as Independents since it starting asking the question 25 years ago. Specifically, 42% identify as Independents, versus 31% as Democrats and 25% as Republicans. Even more interesting, the trend accelerated as the year progressed. If we look at quarterly results, in 4Q13 46% identified as Independents, versus 29% Democrat and 22% Republican.

This is huge, huge news and it seems that my long held belief that both the Democrat and Republican parties are set to completely disintegrate during this current 4th Turning. Earlier in 2012, wrote a piece titled, The Seventy Percent, in which I predicted that no matter who would go on to win the Presidential election, 70% of the public would be disappointed.

Read moreAnd The Most Popular Political Party In America Is … 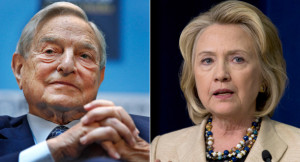 This should come as no surprise considering the ties that Hillary Clinton has and the fact that she has been virtually coronated as the next presidential candidate for the Democrat Party. Today the official Twitter account of the Hillary Clinton super PAC Ready for Hillary made it known that mega billionaire George Soros is sponsoring her efforts.

The Tweet read, “We are proud to welcome George Soros as one of the co-chairs of @ReadyForHillary‘s national finance council.”

We are proud to welcome George Soros as one of the co-chairs of @ReadyForHillary‘s national finance council.

– Dylan Ratigan Rages Over “The Extraction Of America” And The Bought-Off Congress (ZeroHedge, Oct 15, 2013):

It’s been a while since Dylan Ratigan made some headlines but the farce under way in Washington reminded us of his epic ‘falling over the edge’ rant from 2011. In a Santelli-esque rage, Ratigan loses it over the banking, trade, and taxation that is draining America of everything and how nothing will ever change as the Congress is completely bought-off. Both political parties are to blame but “until we get the money out of politics” there is no policy that will fix the mess that we are in, he exclaims (and is once again proven rigfht today). The sad truth is these kind of honest truth moments are few and far between on the mainstream media (though we suspect will increase as reality sinks in)… and Ratigan’s “mathematical facts” and vehemence make this must watch on a day when the US equity market hovers incredulously near all-time highs.

Roosevelt??? Are you serious Mr. Ratigan? Let me remind you of the following facts:

The popular take on the current debt ceiling stand-off is that the Tea Party wing of the Republican Party has a delusional belief that it can hit the brakes on new debt creation without bringing on an economic catastrophe. While Republicans are indeed kidding themselves if they believe that their actions will not unleash deep economic turmoil, there are much deeper and more significant delusions on the other side of the aisle. Democrats, and the President in particular, believe that continually taking on more debt to pay existing debt is a more responsible course of action. Even worse, they appear to believe that debt accumulation is the equivalent of economic growth.

If Republicans were to inexplicably prevail, and the federal government were to cut spending so that its expenditures matched its tax revenues (a truly radical idea) the country’s financial mess would be laid bare. The government would have to weigh the relative costs and benefits of making interest payments on Treasury debt (primarily to foreign creditors) or to trim entitlements promised to U.S. citizens. But those are choices we will have to make sooner or later anyway. In fact we should have dealt with these issues years ago. But generations of mechanistic debt ceiling increases have allowed us to perpetually kick the can down the road. What could possibly be gained by doing it again, particularly if it is done with no commitment to change course?

The Democrats’ argument that America needs to pay its bills is just hollow rhetoric. Paying off one’s Visa bill with a new and bigger MasterCard bill can’t be considered a legitimate payment of debt. At best it is a transfer. But in the government’s case, it doesn’t even qualify as that. Treasury debt is primarily bought by the Fed, foreign central banks, and major financial institutions. None of that will change with a debt ceiling increase. We will just go to the same people for greater quantities. So it’s like paying off your Visa card with a bigger Visa card. 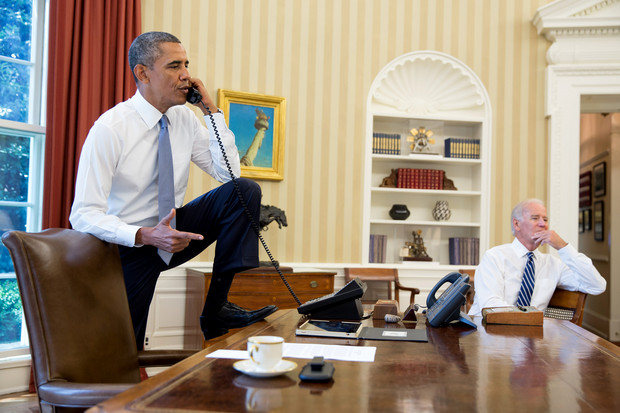 Barack Obama is warning that if he does not get everything that he wants that he will force the U.S. government into a devastating debt default which will cripple the entire global economy.  In essence, Obama has become so power mad that he is actually willing to take the entire planet hostage in order to achieve his goals.  A lot of people are blaming the government shutdown on the Republicans, but they have already voted to fund the entire government except for Obamacare.  The U.S. Constitution requires that all spending bills originate in the House of Representatives, and the House did their duty by passing a spending bill.  If the Senate or the President do not like the bill that the House has passed, then negotiations need to take place.  That is how our system works.  And the weak-kneed Republicans have already indicated that they are willing to give up virtually all of their prior demands.  In fact, if Obama offered all of them 20 dollar gift certificates to Denny’s to end this crisis they would probably jump at that deal.  But that is not good enough for Obama.  He has made it clear that he will settle for nothing less than the complete and unconditional surrender of the Republican Party.

Why is Obama doing this?  Why is Obama willing to bring the country to the brink of financial disaster?

It isn’t hard to figure out.  Just check out what one senior Obama administration official said last week…

“We are winning…. It doesn’t really matter to us” how long the shutdown lasts “because what matters is the end result,” a senior Obama Administration official told the Wall Street Journal last week.

This is all about a political victory and crushing the Republicans.  Obama doesn’t really care how long this crisis lasts because he believes that he is getting the end result that he wants.

According to Obama, the Republican Party is just supposed to roll over and give him the exact spending bill that he wants and also give him another trillion dollar increase in the debt limit.

If the Republicans do not give him that, he is willing to plunge us into financial oblivion.

What are you thinking, Mr President?Is this really the legacy you want for yourself: the chief executive who trampled rights, destroyed privacy, heightened secrecy, ruined trust, and worst of all, did not defend but instead detoured around so many of the fundamental principles on which this country is founded?

And I voted for you. I’ll confess you were a second choice. I supported Hillary Clinton first. I said at the time that your rhetoric about change was empty and that I feared you would be another Jimmy Carter: aggressively ineffectual.

Never did I imagine that you would instead become another Richard Nixon: imperial, secretive, vindictive, untrustworthy, inexplicable.

– Jeff Jarvis in the Guardian

Jeff Jarvis is a journalist, a professor and a self-proclaimed Democrat. While my readers know all too well what I think about these fraudulent political mafias, I mean parties, the older generation still has an archaic attachment to them. I suspect this emanates from some long forgotten time when there was actually a meaningful difference between the two.

Personally, I am quite pleased that pretty much nobody I know from my generation or below identifies with such silly notions as being a “Republican” or “Democrat.” However, I recognize that it does still retain meaning to a majority within the older generations, so when one of of them who identifies with a particular party becomes so disgusted that they turn on their tribal affiliation’s leadership, it can present a significant moment. I believe that Jeff Jarvis has created one of those moments and I strongly suggest you read his op-ed.

What are you thinking, Mr President?

Read morePowerful Guardian Op-Ed: Jeff Jarvis: ‘As A Democrat, I am Disgusted With President Obama’

After repeated requests for feedback, a former longtime D.C. political operative gives this rather brief and too the point assessment of Hillary Clinton’s testimony today before the Senate Foreign Relations Committee regarding the Benghazi Massacre that led to the deaths of four Americans, including the first U.S. Ambassador to be killed in the line of duty in over 30 years.

“And they’re working it up to keep it going after ’16.  A longer term shakedown.  Breaking the whole country right over the wheel.  Community organizing on a global scale.”   -White House Insider

WHI: What I think about Hillary’s show this morning?  All bullsh-t.  Every single second of it.  Want to know something the media isn’t telling you?  That neither the Republicans, the White House, or Hillary’s people are telling you?

EVERY F-CKING QUESTION WAS AGREED TO BEFOREHAND.  Hillary had notes for every question. Watch her look down every time a question is asked.  She sucks at hiding it. That’s the tell.  They negotiated the terms of the questioning weeks ago.  She was prepared.  There is no real investigation by the Senate.  There is no real search for justice here.  None. Zero. Zip. Nada.  Complete bullsh-t.

Normally there’s agreements between staff prior to this kind of thing, but this time the Hillary camp and the Obama White House locked down the questions.  Hillary wanted to protect her ass, and the White House sure as hell was looking to protect their boy.  And this was all agreed to at least two weeks ago. Probably longer.

These Senate Republican f*ckers left me hanging before the election.  They can all go to hell.  Every last one of them.

Imagine my total absence of shock.

WASHINGTON — Backing down from their hard-line stance, House Republicans said Friday that they would agree to lift the federal government’s statutory borrowing limit for three months, with a requirement that both chambers of Congress pass a budget in that time to clear the way for negotiations on long-term deficit reduction.The new proposal, which came out of closed-door party negotiations at a retreat in Williamsburg, Va., seemed to significantly reduce the threat of a default by the federal government in coming weeks. The White House press secretary, Jay Carney, said he was encouraged by the offer; Senate Democrats, while bristling at the demand for a budget, were also reassured and viewed it as a de-escalation of the debt fight.