– And the Most Popular Political Party in America is… (Liberty Blitzkrieg, Jan 8, 2014):

The following poll results from Gallup represent the most significant domestic news story I have come across in 2014 to-date. Gallup polling in 2013 showed that the highest number of Americans now identify as Independents since it starting asking the question 25 years ago. Specifically, 42% identify as Independents, versus 31% as Democrats and 25% as Republicans. Even more interesting, the trend accelerated as the year progressed. If we look at quarterly results, in 4Q13 46% identified as Independents, versus 29% Democrat and 22% Republican.

This is huge, huge news and it seems that my long held belief that both the Democrat and Republican parties are set to completely disintegrate during this current 4th Turning. Earlier in 2012, wrote a piece titled, The Seventy Percent, in which I predicted that no matter who would go on to win the Presidential election, 70% of the public would be disappointed.

This sets up huge opportunities for non-conventional candidates to gain control of local and national office in 2014 and beyond. While I hold out limited hope for traditional politics, we must fight on all fronts for secular reform and the window right now is wide open.

Forty-two percent of Americans, on average, identified as political independents in 2013, the highest Gallup has measured since it began conducting interviews by telephone 25 years ago. Meanwhile, Republican identification fell to 25%, the lowest over that time span. At 31%, Democratic identification is unchanged from the last four years but down from 36% in 2008.

The results are based on more than 18,000 interviews with Americans from 13 separate Gallup multiple-day polls conducted in 2013. 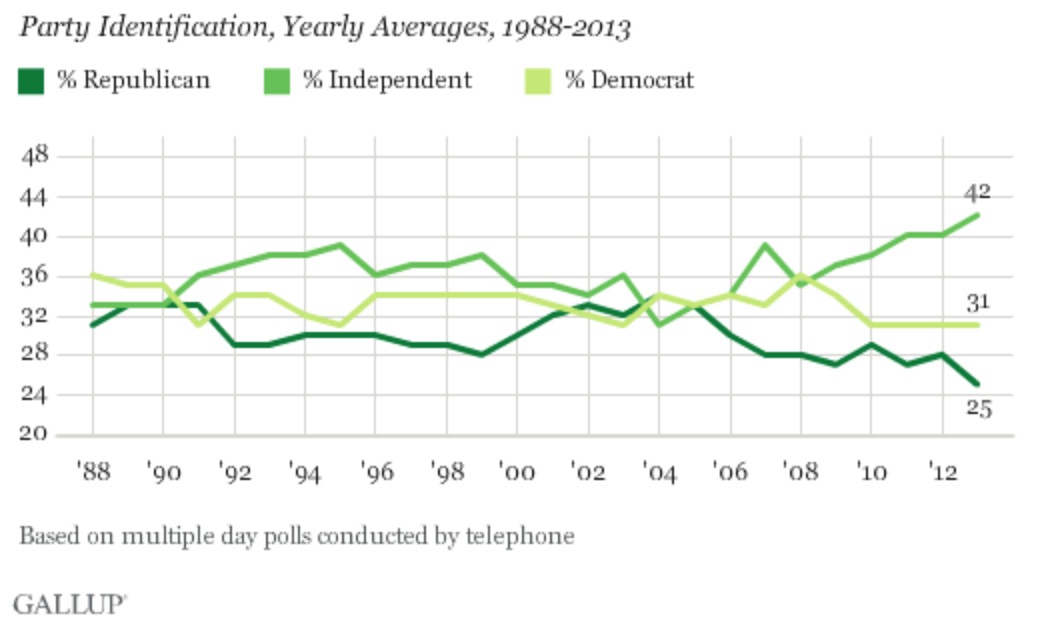 In each of the last three years, at least 40% of Americans have identified as independents. These are also the only years in Gallup’s records that the percentage of independents has reached that level.

Democratic identification has also declined in recent years, falling five points from its recent high of 36% in 2008, the year President Barack Obama was elected. The current 31% of Americans identifying as Democrats matches the lowest annual average in the last 25 years.

The percentage of Americans identifying as independents grew over the course of 2013, surging to 46% in the fourth quarter. That coincided with the partial government shutdown in October and the problematic rollout of major provisions of the healthcare law, commonly known as “Obamacare.” 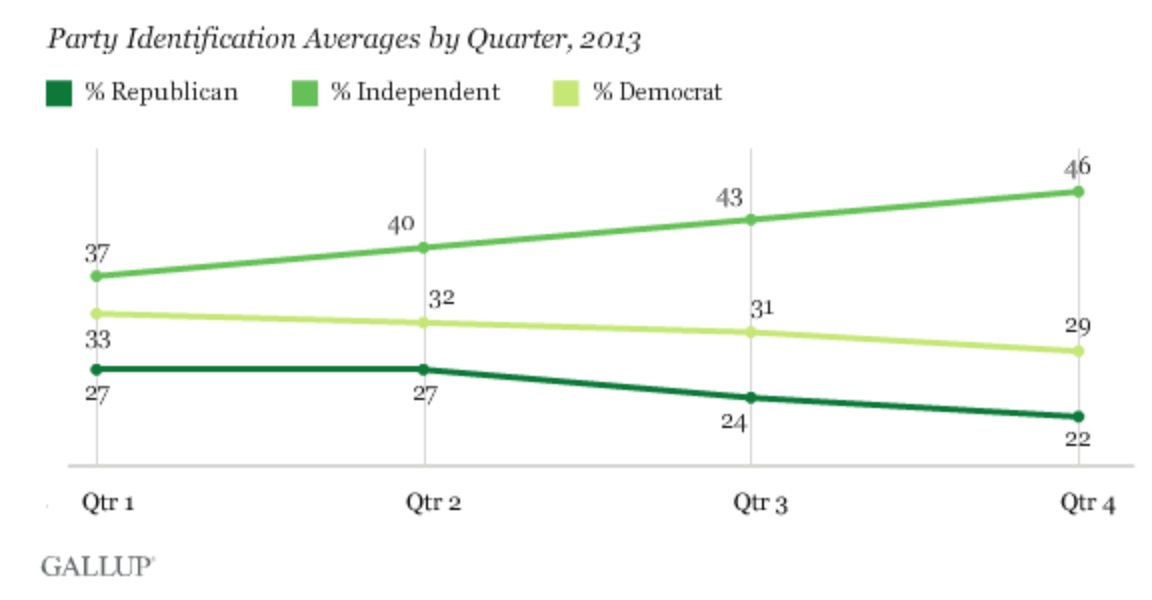 Americans are increasingly declaring independence from the political parties. It is not uncommon for the percentage of independents to rise in a non-election year, as 2013 was. Still, the general trend in recent years, including the 2012 election year, has been toward greater percentages of Americans identifying with neither the Republican Party nor the Democratic Party, although most still admit to leaning toward one of the parties.

The increased independence adds a greater level of unpredictability to this year’s congressional midterm elections. Because U.S. voters are less anchored to the parties than ever before, it’s not clear what kind of appeals may be most effective to winning votes. But with Americans increasingly eschewing party labels for themselves, candidates who are less closely aligned to their party or its prevailing doctrine may benefit.