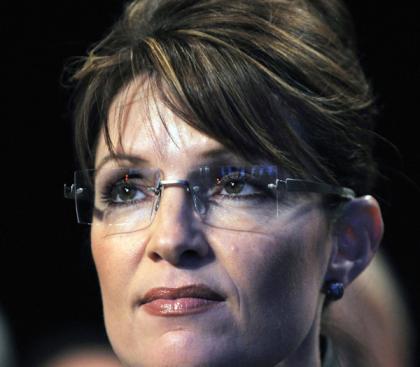 Sarah Palin is alleged to have pressured officials to dismiss a state trooper. Photo: AFP

As Senator McCain sought to restore control over unruly rallies that have seen a stream of invective, including a death threat aimed at Democratic rival Barack Obama, the “troopergate” scandal threatened to torpedo his campaign.

He said she had allowed her husband Todd Palin to use the Alaska governor’s office and its resources to pressure officials to fire her former brother-in-law, state trooper Mike Wooten.

“Governor Palin knowingly permitted a situation to continue where impermissible pressure was placed on several subordinates in order to advance a personal agenda, to wit: to get Trooper Michael Wooten fired,” the report said.

Mrs Palin, the first woman to be selected on a Republican ticket, was plucked from political obscurity in Alaska by the Arizona senator in late August to be his running mate in the November 4 elections.

A devout Christian mother-of-five who is pro-life and a committed hunter, she fired up the party’s conservative base, which had not fully embraced Senator McCain. But her lack of national and foreign experience raised doubts among observers about Senator McCain’s judgement.

Mrs Palin, 44, has become Senator McCain’s chief attack dog against Senator Obama, drawing thousands of people to her rallies, and accusing the Chicago senator last week of “palling around with terrorists”.

As Senator Obama, 47, took a hefty lead in the polls, Senator McCain’s campaign sought to refocus its fight for the White House away from the economy, with relentless, searing attacks.

But after the US Secret Service said on Friday it was investigating an alleged death threat shouted at a Florida rally, Senator McCain was forced to tone down the attacks.

“We want to fight, and I will fight, but we will be respectful. I admire Senator Obama and his accomplishments and I will respect him,” Senator McCain, 72, told a Minnesota rally yesterday.

“I want to be president … but I have to tell you that he is a decent person and a person you don’t have to be scared of as president of the United States.”

Crowds at the rallies had become increasingly inflammatory, shouting “terrorist” and “liar” when Senator Obama was mentioned. At one Florida rally, someone even shouted “kill him”.

“It’s easy to rile up a crowd by stoking anger and division. But that is not what we need now in the United States – the times are too serious,” Senator Obama said.

For the first time in a Newsweek poll, Senator Obama on Friday was given a double-digit lead, 52% against 41% for Senator McCain.

It was not immediately clear what actions the Alaskan legislature would take in light of the report against Mrs Palin. She could be censured or the legislature could choose not to act at all.